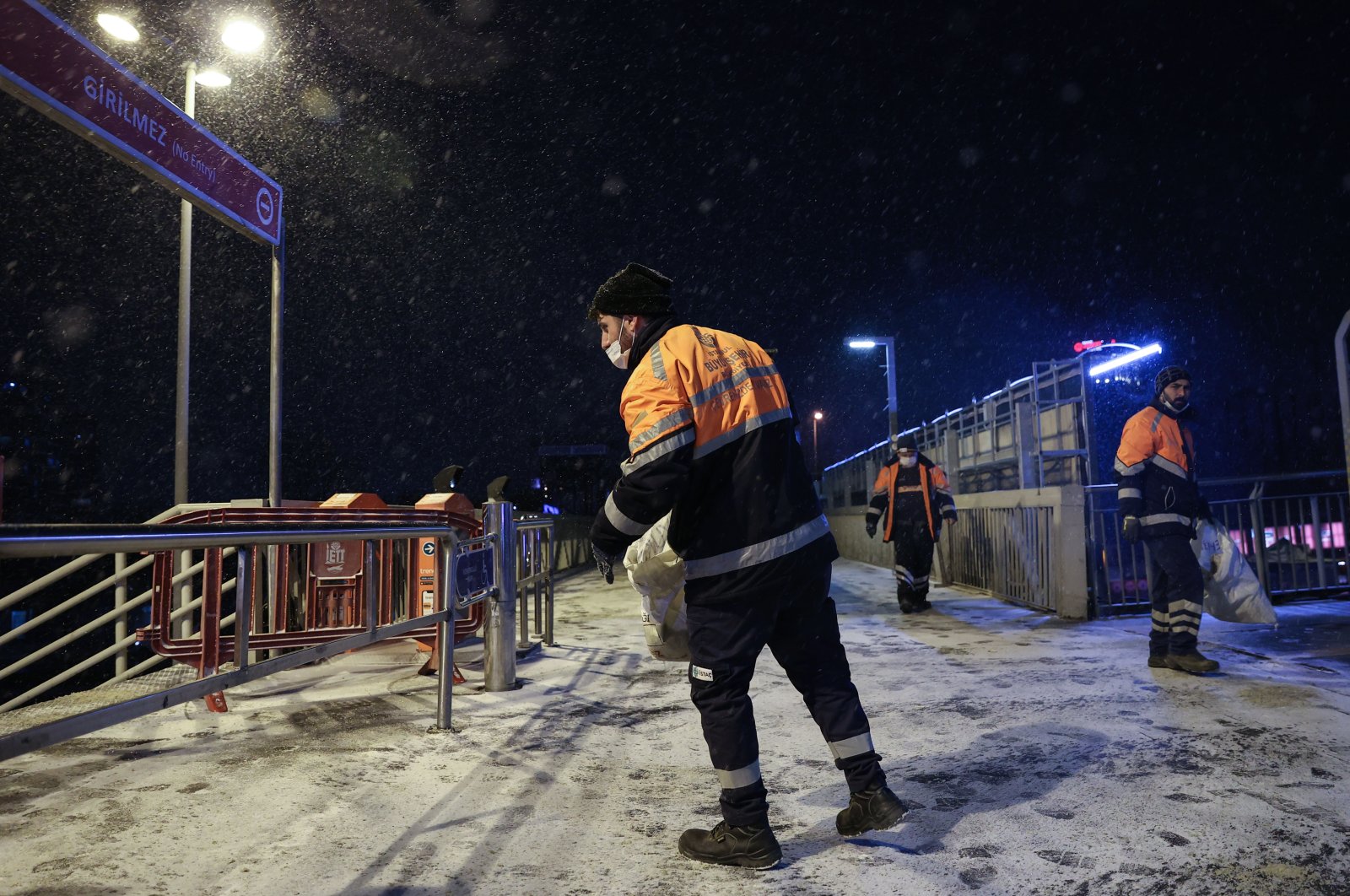 Snow began to fall over Istanbul, Turkey’s most populated city, late Saturday, commencing a week of projected sleet amid fears of a harsh winter the city has not experienced in years

A long-rumored and feared cold front coupled with heavy snowfall arrived in Istanbul late Saturday after moving in from the country's northwestern Thrace region on the way.

By midnight, much of the city was covered in white as the Asian districts of the 15-million megapolis were last to receive heavy snowfall.

The Turkish State Meteorological Service (TSMS) and Istanbul Metropolitan Municipality's (IBB) Disaster Coordination Center (AKOM) had previously warned Istanbulites that the snowfall could last for five days with a severe drop in temperatures. Despite the ongoing weekend and nighttime curfews throughout the nation, traffic levels remain high due to decreased public transport ridership over COVID-19.

A blanket of snow covered much of Istanbul on Sunday morning, which weather forecasts say will increase in density throughout the day. Except for brief respites, the snowfall is expected to linger until Thursday.

Parts of Istanbul on higher ground were more exposed to the snowfall, and municipality crews worked tirelessly to clear snow-covered roads and streets, pouring salt on icy roads.

The snow arrived during a 56-hour lockdown that started late Friday due to the coronavirus outbreak. Only tourists who are exempt from the curfew were able to enjoy snowfall, as well as children who had snowball fights in front of their houses. Owners of shops exempt from the curfew, like bakeries and grocery stores, struggled to keep the entrance to their premises clear of snow. In Çatalca, a remote district on the city's west, the snow had already reached a depth of 20 centimeters (just less than 8 inches).

The snowfall Istanbul is experiencing is expected to be as harsh as the winters of 1987, 2002 and 2004, though precipitation has been low for the city compared to past years so far. In 1987, Istanbul had one of the worst winters, where snow reached depths of 1 meter in some locations, with people stranded in their homes for days.

The Bosporus, the busiest waterway in the country that divides Istanbul in two, was closed to maritime traffic on Sunday as visibility dropped below half a nautical mile. Istanbul City Lines, which operates passenger ships between the city's Asian and European sides, announced that they had suspended all services due to the bad weather, except a line between Kabataş port and the Princes’ Islands.

Though temperatures are expected to rise midweek, forecasts do not predict a sudden surge in temperatures.

Elsewhere, the weather across Turkey was mostly cloudy, with rainfall forecast for cities on the Aegean coast, the Black Sea region and areas near the Mediterranean province of Antalya. The Marmara region in which Istanbul is located and other regions also experienced snowfall and rain at times. Authorities warned against avalanches in the eastern Black Sea region and eastern Turkey. The snow is expected to reach depths of up to 30 centimeters on higher ground in Marmara and western parts of the Black Sea regions. Strong winds are also predicted for Marmara, forecasting speeds of 80 kilometers per hour (49.7 miles per hour).

The northwestern provinces of Edirne, Kırklareli and Tekirdağ were hit by snowfall earlier in the day. Moving south, the storm and snowfall led to the suspension of marine and passenger traffic in the Dardanelles, the waterway that connects the Aegean Sea to the Marmara and Black Sea. In Çanakkale, where the Dardanelles are located, the provincial governorate ordered that schools scheduled to reopen for in-person education Monday be shut. The governorate also ordered that all those pregnant or with disabilities working in public institutions and agencies take administrative leave.

Media outlets reported that Greece shut down a border crossing with Turkey due to heavy snowfall. A long line of trucks formed at Edirne's Hamzabeyli, an alternate crossing. Authorities announced that the Ipsala border crossing, closed on Saturday, would remain closed to trucks for the time being. Roads to and from Hamzabeyli, meanwhile, remain exposed to heavy snowfall, while snowplows work to keep them clear.