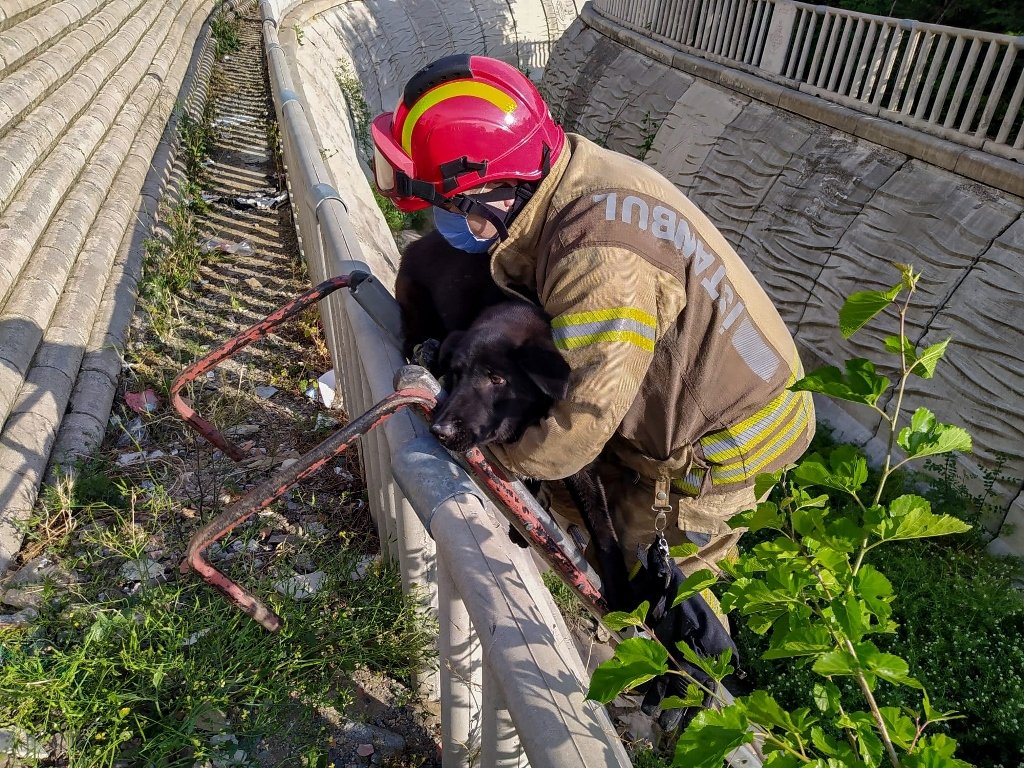 Firefighters carry a dog to safety after he is stranded on the bank of a stream in Sancaktepe district, in Istanbul, Turkey, May 27, 2021. (COURTESY OF FIRE DEPARTMENT OF ISTANBUL METROPOLITAN MUNICIPALITY)
by DAILY SABAH Jul 28, 2021 3:55 pm
RECOMMENDED

Istanbul, as Turkey’s most crowded city, is also home to a large number of animals. Stray dogs and cats in the metropolis often literally find themselves in a tight spot when they are stuck in narrow spaces or caught in the middle of a fire. The city’s fire department is at the forefront of animal rescue efforts. The department announced on Wednesday that its members saved 7,821 animals in the first six months of 2021, from cats and dogs to snakes and iguanas not endemic to the city.

Since 2020, Istanbul firefighters have rescued some 32,000 animals. The fire department’s head, Remzi Albayrak, told Demirören News Agency (DHA) that most rescues were for cats, dogs and birds. Other animals rescued include cows, horses, goats and sheep.

Albayrak said they received up to an average of 130 calls daily for animal rescues. “After rescuing them, we hand the animals to the veterinary department of the municipality for treatment. After treatment, we hand them over to their owners if they are adopted pets. If they are not, they are delivered to the Directorate of Wildlife Protection and Parks,” he said.

The fire chief also complained about unnecessary calls for animal rescue. “I ask citizens not to call us for cats climbing up the roofs and trees, thinking they were stranded there. It is in the nature of these animals to climb up the high places,” he said.

Albayrak also reminded that the fire department hotline number, which is 110, will be out of service soon as all emergency services in the city are being integrated into one hotline number, 112.