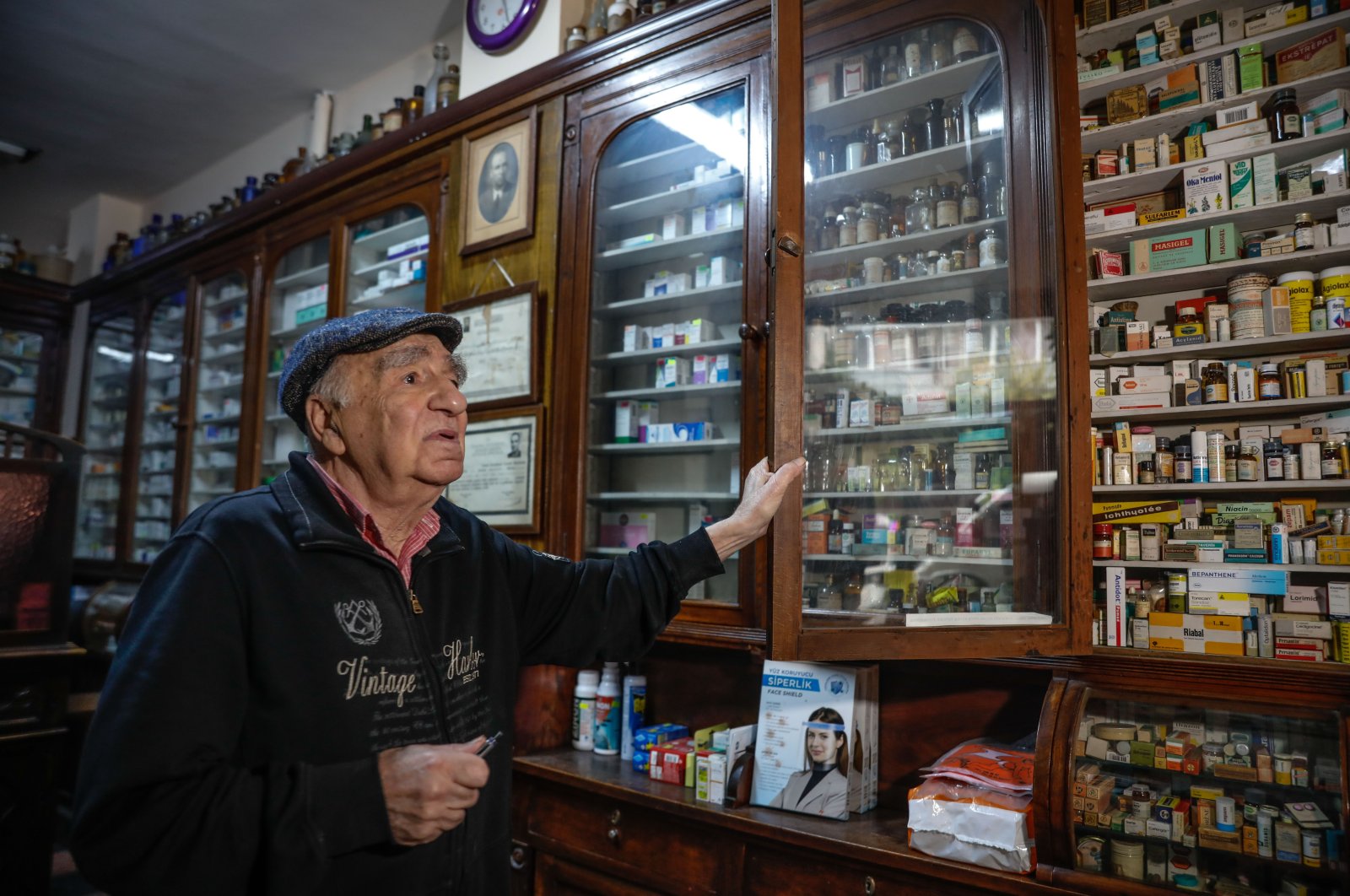 Tucked away in a quiet side street of the quaint neighborhood of Moda in Istanbul’s Kadıköy district, Yeni Moda pharmacy stands the test of time. This is one of the oldest pharmacies in the city, tracing its roots to 119 years ago, in the last years of Ottoman Empire. Melih Ziya Sezer is younger than the pharmacy, at the age of 89, and adheres to his father’s legacy as the sole staff of the place.

Unlike the overwhelmingly white interior of modern pharmacies, Yeni (New) Moda takes visitors into the history of pharmacies with its distinct interior. Decades-old dark brown wooden panels give a museum-like quality to the pharmacy. Indeed, carefully organized shelves contain an odd mix of modern medicine with medicines dating back to the early days of the Republic and the Ottoman era, placed as historic objects. At the back, a small room with a sign on the door reading “laboratory” gives Sezer a space to prepare traditional handcrafted medicines. Next to the counter where a computer stands, among the few modern objects inside the pharmacy, two big cabinets appear intimidating with signs reading “strong poisons” and “mild poisons.” Inside them are poisons indeed, as they were commonly used, in minor doses, to prepare medicines decades ago.

The pharmacy was originally established in 1902 under the name of “Eczane-i Saadet” (Pharmacy of Bliss) by Faik Iskender Bey in another quarter of Kadıköy. It later moved to its current place in 1928 and its name was changed to Moda Pharmacy. But all of its interior, from cabinets to other materials, were moved to the new pharmacy, which was purchased in 1936 by Melih Ziya Sezer’s father. Since 1950, Melih Ziya Sezer has run the pharmacy.

“Medicines were produced in pharmacies before the industralization of the sector in 1950s. Pharmacies had cough syrups, syrups of all kinds and ointments and back then, doctors would send formulas for preparing medicines instead of prescriptions and we would mix and prepare them,” he recalls the old days of pharmacy. “I still have some customers bringing me formulas and I try to prepare medicine but most ask for ready-made medicines,” he told Demirören News Agency (DHA).

As a matter of fact, it is one of the best sides of the job for Sezer, who calls it an “art.”

“But this is a critical task,” he adds. “There is no room for error and even a small deviation from a prescribed formula may cost a life. I remember a lecturer at the university where I studied to be pharmacist telling me that pharmacists can fix the error of a doctor but there was no one but a gravedigger to do the rest of the job if a pharmacist makes a mistake in preparing the medicine,” he says. Sezer is the father of a son who studied to be a pharmacist but does not intend to leave his job. “I want to work here as long as my health allows. I don’t know what will happen to it after I die,” he says.

The elderly proprietor devotes his time to both sales and the preservation of the antique interior. “There is no pharmacy left like this. All this furniture is from 1902,” he says. Sezer also adheres to the old sales method and does not have a credit card machine.

“You have to love your job. For me, this place is like paradise. This is not a job you will do for money,” he concludes.