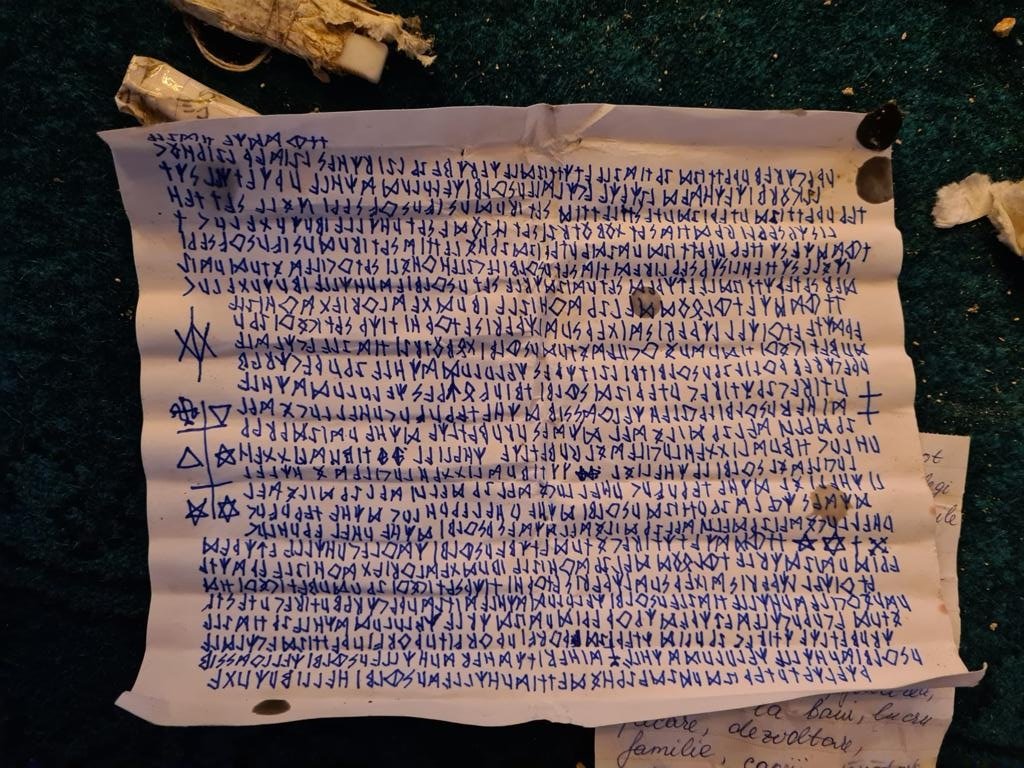 A parchment found at Hagia Sophia Grand Mosque, in Istanbul, Turkey, is seen in this photo published by the Sabah newspaper, Nov. 26, 2021. (Sabah Photo)
by DAILY SABAH Nov 26, 2021 9:34 am
RECOMMENDED

The faithful praying at the mosque alerted police a few months ago when they noticed the block was moved from its place on the wall, Sabah newspaper reported Thursday. Five rolls of parchment and regular paper containing writings in the Runic script and in another language were discovered underneath the block, along with several drawings and a collage apparently containing photos, with copies of one photo surrounding the others. All were wrapped with a plastic bag and tucked under the 30-centimeter (11.8-inch) wide block. Police launched an investigation into the incident and sought assistance from staff from the local culture and tourism directorate to check whether the sheets of parchments were ancient artifacts. The investigation is still underway.

Hagia Sophia, newly named the Hagia Sophia Grand Mosque, was reopened as a Muslim place of worship in July 2020, decades after its conversion to a museum. Although the COVID-19 pandemic restricted visits, the mosque has found huge popularity both among Turks and tourists, receiving more than 3 million visitors since its reopening.

The iconic monument served as a church for 916 years until the conquest of Istanbul. It then served as a mosque from 1453 to 1934 – nearly 500 years – and most recently as a museum for 86 years. One of the most visited historic buildings in Turkey by domestic and international tourists, Hagia Sophia was added to the UNESCO World Heritage List in 1985. On July 10, 2020, a Turkish court annulled a 1934 Cabinet decree that had turned Hagia Sophia into a museum, paving the way for its use again as a mosque after the 86-year hiatus. Though it now serves as a mosque, it is open to visits by people of other faiths, like other mosques around the country.