Rainfall, tornado leave behind havoc and miracle in Istanbul 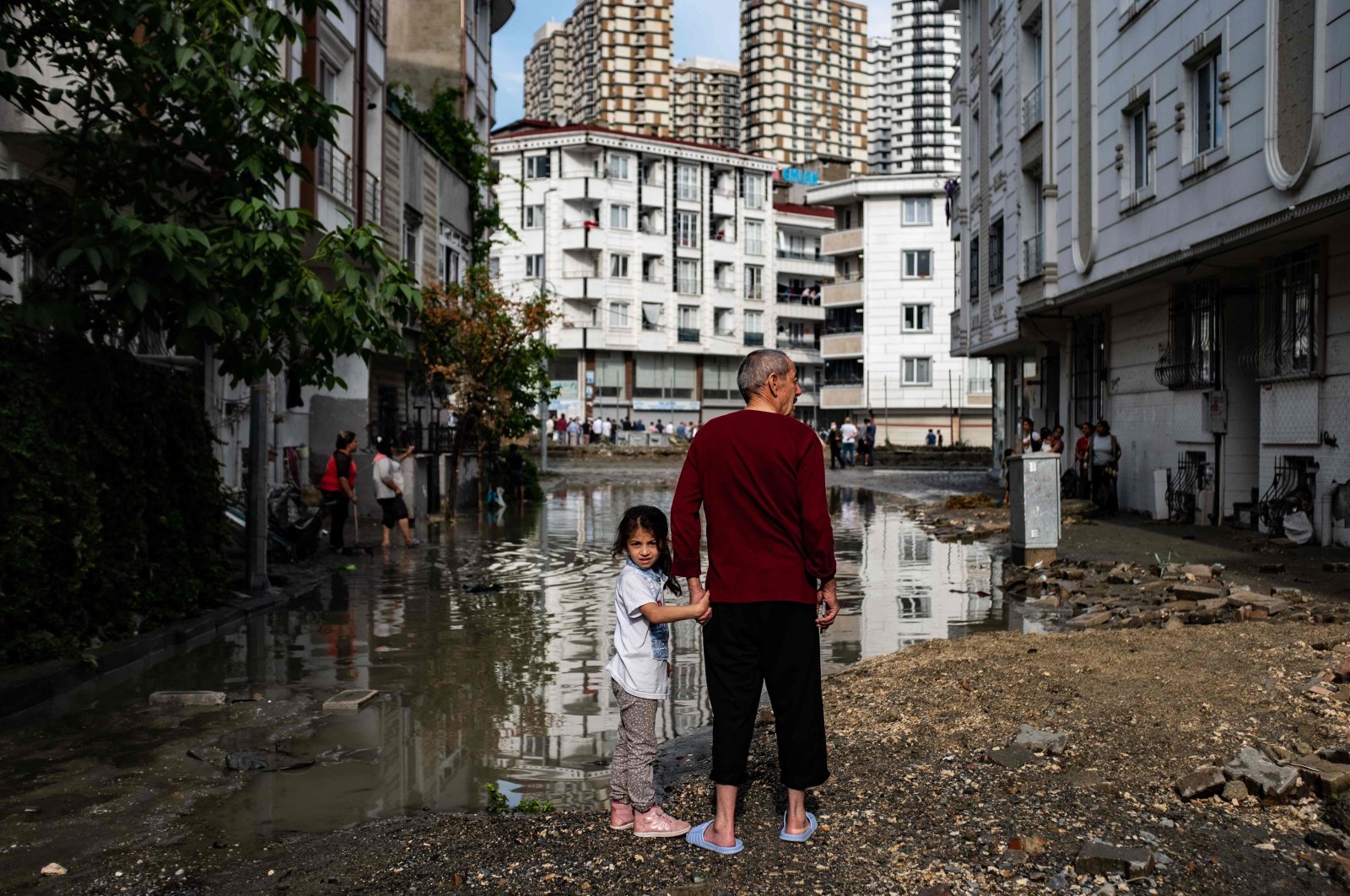 Several Istanbul districts were left reeling after some heavy rainfall and a rare tornado battered Turkey's most populated city Tuesday. Esenyurt, an ever-growing suburb on Istanbul’s European side was among the most affected where a man trapped in his house was killed.

City officials were assessing the damage to compensate for material losses after floodwaters were largely drained Wednesday.

Murat Coşkun, whose rescue at the last minute from a flooded apartment made headlines, recounted the horror to reporters.

Istanbul Governor Ali Yerlikaya said Wednesday that damage assessment work continued in Esenyurt and they were considering what steps could be taken to prevent a repeat of the disaster.

Heavy rainfall and flash floods were unprecedented for the city but the damage they left behind in Esenyurt is also tied to haphazard building practices. Most of the flooded buildings were constructed on a river bed.

Locals who were accommodated at hotels by the governorate on Tuesday night returned to their homes on Wednesday to examine the extent of damage while authorities started delivering aid in the area. Some residents tried to salvage whatever possessions they could take from their houses filled with mud and debris as disaster cleanup crews drained floodwaters.

Further west of Esenyurt, locals were removing debris and assessing the damage a tornado left in its wake in Büyükçekmece and Çatalca districts. The tornado was particularly devastating for fields and greenhouses in the rural parts of the two districts.

Ahmet Şanlı, who runs a large farm and greenhouses, told İhlas News Agency on Wednesday that his 70 acres of cultivated lands and a large greenhouse were heavily damaged. "This is where I make my living. I don’t know what to do," Şanlı, whose brother was slightly injured in the tornado, lamented.

Esenyurt Mayor Kemal Deniz Bozkurt, who took office last year, told reporters that construction of buildings on river bed has been an unsolved problem for years. "This is a river bed and construction here should not be allowed. We have a project to resolve this problem and plan to rehabilitate the river bed," he said.

Coşkun’s rescue was captured by cameras as his neighbors and passersby scrambled to evacuate him through the window of his flooded apartment. His rescuers frantically tried to keep him alive, by handing a plastic hose to help him breathe and trying to pull him out by grabbing his hand, only part of his body above the water. Others tried in vain to empty floodwaters with buckets while the iron bars outside the window that prevented rescue was finally removed and Coşkun was freed.

Coşkun, who spent a day in the hospital, spoke to reporters outside his home after he was discharged. "I was too close to death," he recounted the moments he was trapped at home. He was helping a neighbor to evacuate floodwaters when another neighbor called him to help. Just as he walked, he saw “a wave” coming toward him and ran into his house.

"When the water came, it burst through the windows and suddenly, there was water everywhere. Everything inside started coming down. I ran for the door but the door handle was broken. People ran for help but the water outside stopped them," he said. He added that keeping his calm helped him. "I managed to reach for bars outside the window and lifted myself. I was holding tightly so waters would not drift me away. I managed to extend my hand and someone saw. I then saw a hose and it was what saved my life. For about twelve or thirteen minutes, I breathed through that hose. Then, people managed to break the bars and pulled me out," he said.

He was unaware of how dire his situation was and it was only when he saw the video of his rescue he felt "horrified."

Ahmad Shaban, a Syrian refugee, was not so lucky. The 31-year-old man was staying with his cousin Muhammad Yasser Issa, in the latter’s basement floor apartment when floodwaters hit the street.

Issa, a disabled man who lost a leg in the Syrian civil war, fell to the ground when floodwaters hit him.

He told Demirören News Agency (DHA) on Wednesday that Shaban lifted him and took him outside before returning home "to take something."

"More water poured in and blocked the door. He was trapped in a room and could not open the door because of the water," Issa said.