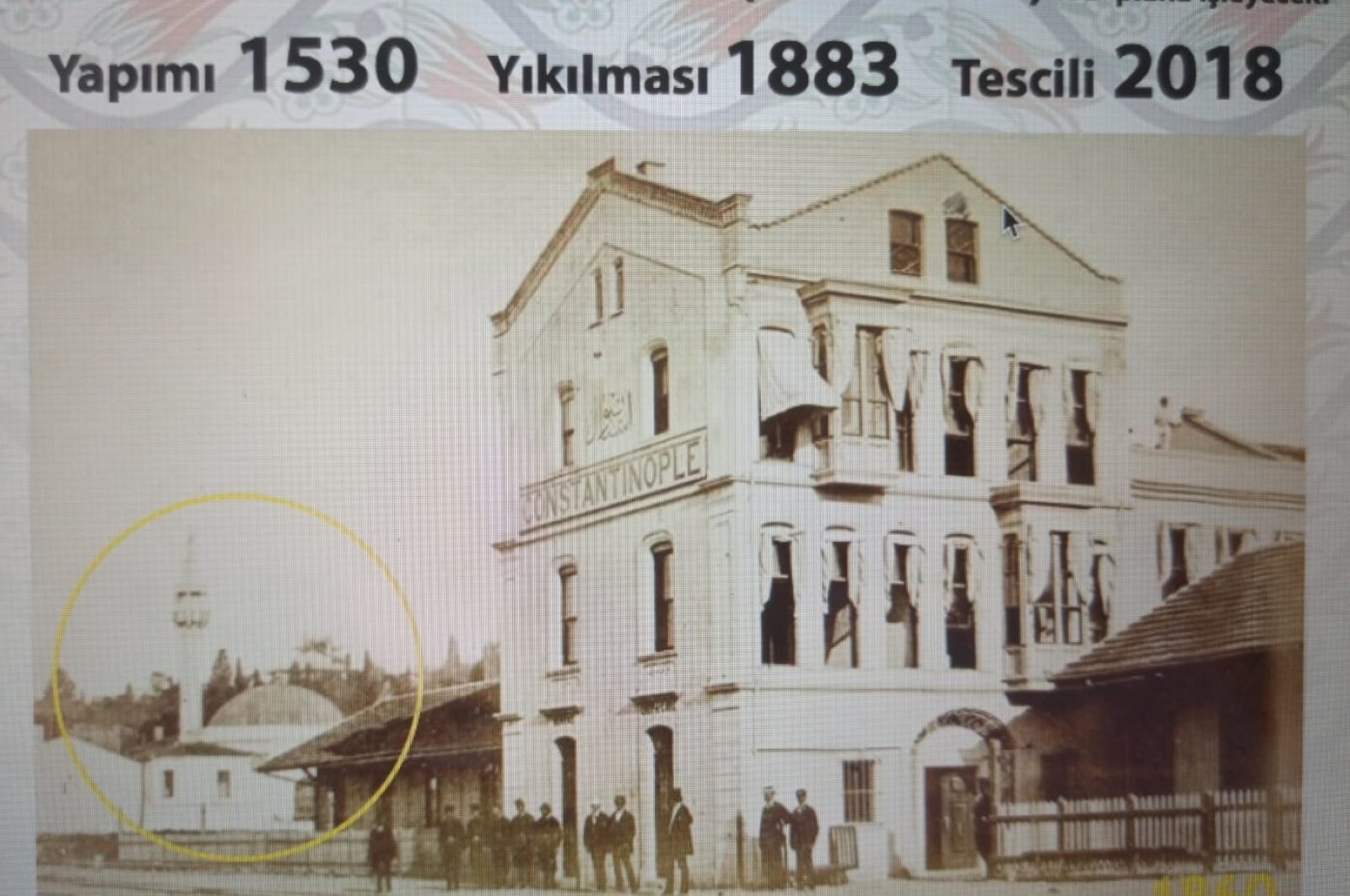 A historical photo showing the Daya Hatun Mosque which the association seeks to rebuild after it was demolished in 1883 in Istanbul, Turkey. (AA Photo)
by DAILY SABAH Aug 12, 2020 2:01 pm
RECOMMENDED

Minarets and domes are inseparable parts of Istanbul’s skyline, and, as the most populated city of Turkey which once served as the Ottoman capital, Istanbul also boasts a large number of iconic mosques. Yet, a considerable number of mosques as well as other Ottoman-era buildings like madrasas or schools remain “missing.” A nongovernmental organization (NGO) is now tracking down mosques and other buildings that have gone unused, fallen into disrepair or were converted for other purposes over the centuries and seeks their restoration or reconstruction.

Since 2006, the Istanbul Association for Protection of Environment, Culture and Historical Buildings (ISTED) discovered about 400 mosques whose existence was long forgotten. The association, also active in Edirne, another former Ottoman capital in present-day northwestern Turkey, is made up of academics, researchers and surveying engineers. Members scan Ottoman archives, historical maps, documents and land registers and search for the forgotten structures by going into the field. Their ultimate aim is the restoration of these historical sites. The association documents the existence of mosques and madrasas and then applies to authorities for their restoration to their original state. Once approved, architects working for the association design the structures based on their original design and rebuild them with the aid of donors.

The association so far discovered 22 mosques in the city’s historical peninsula, home to landmarks like the Blue Mosque, Topkapı Palace and Hagia Sophia, which was recently reverted to its Ottoman-era function as a mosque and renamed Hagia Sophia Grand Mosque.

The association’s chairman Dr. Erhan Sarışın told Anadolu Agency (AA) that their work originally began during the term of then-Istanbul Mayor Recep Tayyip Erdoğan in the 1990s, when he and his friends applied for rebuilding Bereketzade Ali, a small mosque in Istanbul’s Beyoğlu district. Sarışın was the chief physician at a hospital in the district at the time.

“There was a small landfill in front of the hospital, and I wanted to convert it into green space. The municipality blocked my application, and they told me there was a historic mosque beneath the space. I researched it and indeed, found out it was Bereketzade Ali Mosque, built in 1453. Erdoğan himself had applied to the Board of Monuments (which oversees the preservation of historical buildings) for rebuilding it, but his application rejected. I was very interested and contacted experts. Together, we did excavation and found the mosque remained underneath the ground. We even discovered a secret path from Galata Tower to the mosque. The further research in archives showed it was built after Istanbul’s conquest by Ottomans,” he said. The work on the small mosque led to the establishment of the association years later.

“We are a devoted group of volunteers hunting down missing historical artifacts of Istanbul,” Sarışın said. So far, they have discovered 400 mosques, about 150 madrasas and more than 1,000 fountains in the city by sifting through archives. They managed to register 150 of them as mosques for their renovation or rebuilding. The exploration appears to be an easier process than what comes next. Sarışın said the Board of Monuments requires “up to 200 different documents” for registration, from maps to photos and title deeds.

Sometimes, an old photo would lead them to discoveries. “For instance, we rebuilt Seydibey mosque in Fındıkzade neighborhood. I found out it was located in the parking lot where I have been parking my car for one year,” he said.

Plots of the mosques which fell into disrepair and were demolished are often filled with new buildings, from nightclubs to residential buildings or parking lots. This complicates the rebuilding process due to property rights.

The largest mosque the association discovered was in Beşiktaş district. Aziziye Mosque was as big as the Blue Mosque. Named after Ottoman Sultan Abdülaziz, the mosque was originally built by Süleyman I, better known as Suleiman the Magnificent. Abdülaziz, who built Dolmabahçe Palace, decided to demolish it and rebuild a bigger mosque near the palace. The construction was scrapped when he was dethroned. The association used imaging technology and discovered remains of the construction of the 52-by-57-meter (170-by-187-foot) mosque. They are now working to rebuild it.