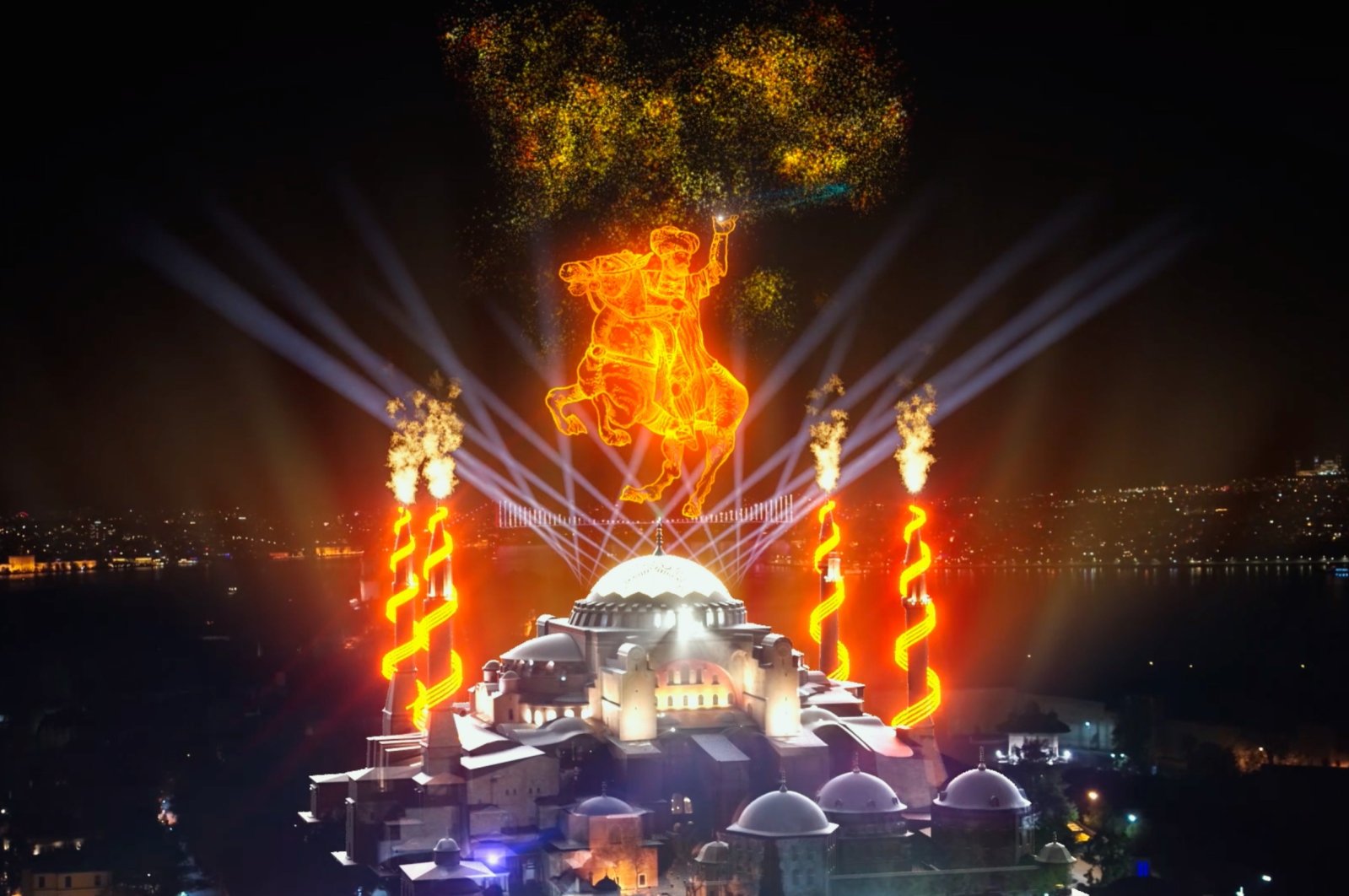 The image of Sultan Mehmed II is projected to the sky with the laser projection-sky mapping technique from the dome of the Hagia Sophia Grand Mosque in Istanbul's Fatih, Turkey, May 29, 2021 (AA Photo)
by Daily Sabah with Agencies May 30, 2021 1:39 pm
RECOMMENDED

The 568th anniversary of Istanbul’s conquest was celebrated with a visual feast in the Turkish metropolis.

Turkey's Communications Directorate organized a visual extravaganza in cooperation with the Culture and Tourism Ministry to mark the anniversary of the conquest of Istanbul that changed the course of history.

Following the recitation of the 48th chapter of the Quran, Surah Al-Fath – meaning Victory or Triumph – in Hagia Sophia Grand Mosque, the celebrations continued with a virtual sky mapping show that was used for the first time at Galata Tower and Hagia Sophia, a symbol of the conquest.

The image of Mehmed the Conqueror on horseback – Sultan Mehmed II, who conquered Istanbul at the age of 21 and turned the Ottomans into a global empire – was also featured in the show.

Earlier, Presidential Communications Director Fahrettin Altun had said on Twitter that Istanbul would celebrate its holiday "with all its splendor."

"I congratulate the 568th anniversary of the Conquest of Istanbul, one of the most glorious victories of our history," he said on Twitter.

He recounted Prophet Muhammad's hadith regarding the conquest with a visual that read: "Istanbul will definitely be conquered. What a great commander is the commander who conquers it, what a great army that army is."

"I commemorate with mercy and respect Mehmed the Conqueror and his glorious army, who added this unique city to our heritage of civilization," Erdoğan concluded.

On May 29, 1453, Sultan Mehmed II conquered Istanbul, then called Constantinople, from where the Byzantines had ruled the Eastern Roman Empire for more than 1,000 years.

The conquest transformed the city, once the heart of the Byzantine realm, into the capital of the new Ottoman Empire.

Although the city had been besieged many times before, nobody had been able to take it, and Sultan Mehmed II knew well that achieving the impossible required unorthodox tactics and insight.

The sultan assembled a large army – said to include over 200,000 soldiers, yet some historians say the figure was less than half of this – and appeared before the city's strong walls with full confidence.