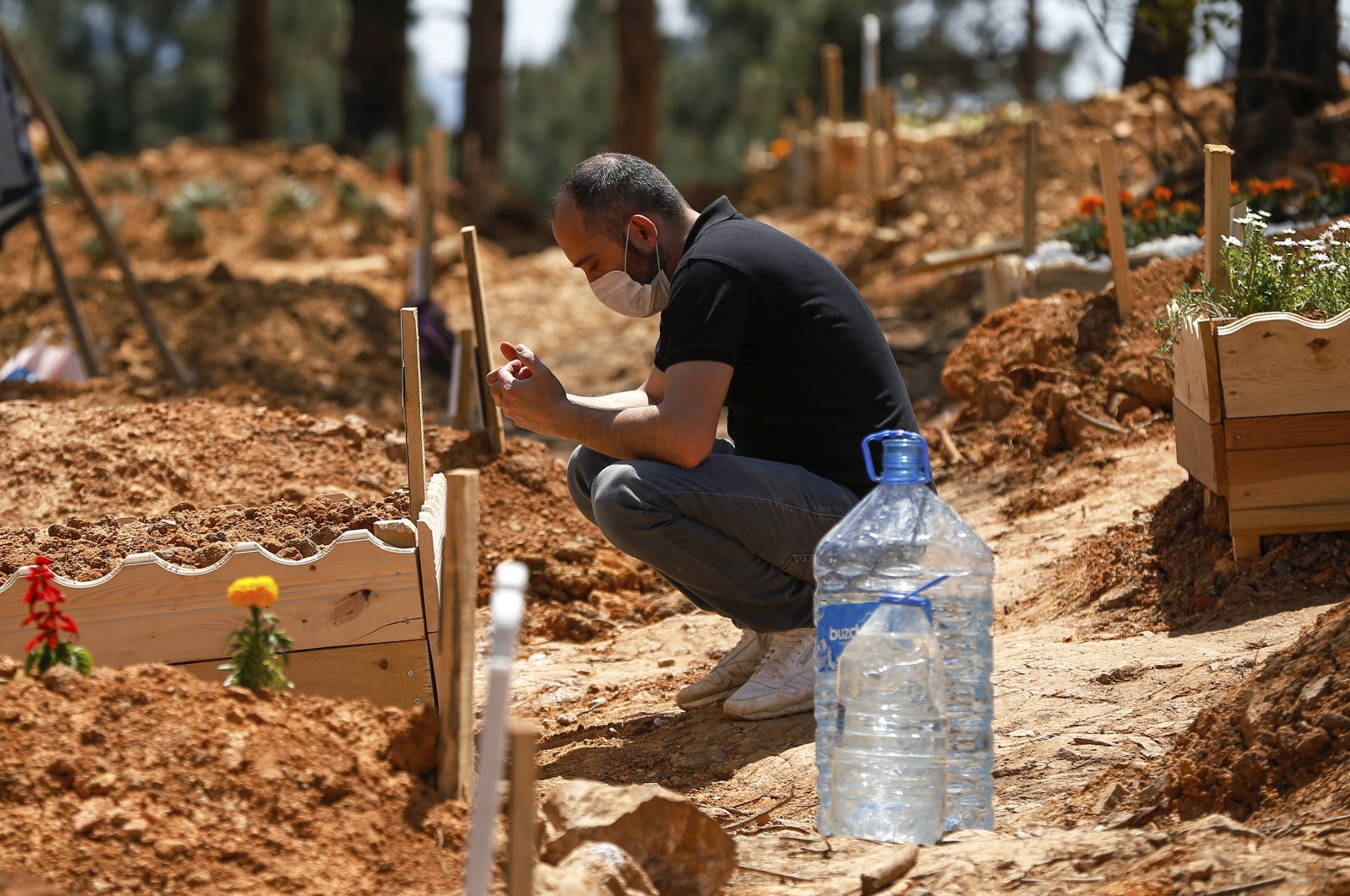 A man, wearing a face mask for protection against the coronavirus, prays at the grave of his loved one, who died of COVID-19, at a special section of Istanbul's Baklacı cemetery devoted to the disease's victims, in Istanbul's Beykoz district, May 11, 2020. (AP Photo)
by ASSOCIATED PRESS May 14, 2020 11:33 am
RECOMMENDED

In a special section of Istanbul’s Baklacı cemetery set aside for COVID-19 victims, workers well outnumbered the three mourners – the maximum number of relatives allowed to attend the burial of Münevver Kaya amid the measures established by Ankara. Their unenviable task was to intervene and remind the bereaved of social distancing rules whenever grief and the relentless urge for a friendly human touch overcame them.

Like elsewhere, the pandemic has changed the way Turks bury and mourn their dead.

On some occasions, funeral prayers have been held at the graveside instead of in mosques, as is the normal custom. Mourners must stand well apart and wear masks.

Traditional "mevlit” ceremonies – a kind of wake held at the home of the deceased where a poem on the Prophet Muhammad is read – have also suffered due to the restrictions on gatherings.

Meanwhile, travel restrictions have forced many families to bury their loved ones in the place where they died, instead of taking the bodies back to hometowns or villages as decreed by tradition.

"On some occasions, we have buried the dead ourselves because no family or friends could be present,” explained Şafak Çevirme, deputy head of the Istanbul Cemeteries Directorate.

Despite its initial high rate of coronavirus infections, Turkey's death toll is relatively low and morgues have not been overwhelmed, unlike in other hot spots such as Italy or Spain.

Still, concerns over the safe handling of COVID-19 victims' bodies are high.

At Zincirlikuyu, one of Istanbul’s main morgues, officials who wash and prepare bodies for burial according to Islamic tradition wear hazmat suits and other protective equipment.

"We have always followed strict guidelines, but overalls, goggles and face shields have now been added,” Çevirme said. "Our personnel are among those under the highest risk of infection, after health workers.”

A number of morgue workers and burial officials in Istanbul were infected, but all have recovered, he said, adding that all personnel are offered psychological support to cope with the strain.