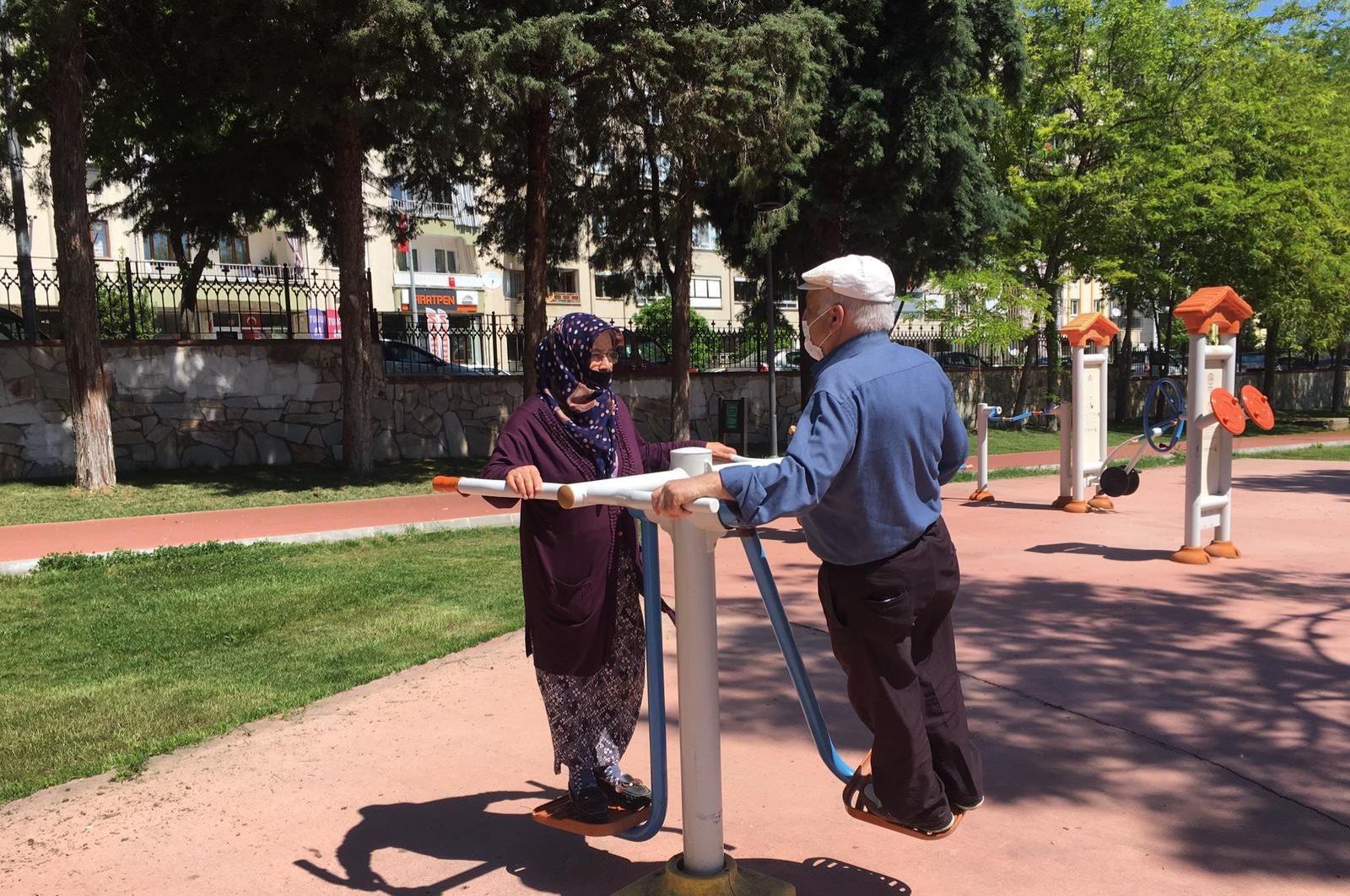 For four hours on Sunday, Turkish citizens aged 65 and above stepped out of their houses for the first time in almost two months. “The day you have waited for is here,” Health Minister Fahrettin Koca tweeted as a curfew on senior citizens was lifted for one day.

Fearing mass infection among the elderly, a high-risk group for coronavirus, Turkey, whose aging population grows, has ordered an exclusive curfew for millions of senior citizens in March. As COVID-19 fatalities started dropping and recoveries increased, authorities decided to include the elderly in the “normalization program” of lifting restrictions.

Between 11 a.m. and 3 p.m. on Sunday, senior citizens were free to go out. The time was specifically chosen as the rest of the population in 31 cities was ordered to stay at home as part of a weekend curfew in place since last month.

“It is just like heaven. I missed going out,” 68-year-old Doğan Çetiner told İhlas News Agency (İHA) as he joined his peers on an esplanade in the Aegean city of İzmir. “It is a fine day, the weather is good. I have not been to the coast for about seven months. I will watch the sea and converse with friends,” Çetiner said.

Health Minister Koca thanked senior citizens for helping Turkey’s fight against pandemic by staying at home and urged them not to neglect to wear a mask “on this beautiful day.”

Seventy-two-year-old Nalan Ertuğ says she forgot what day it was as they have been at home “for ages.” “I hope this pandemic will be over soon,” she says as she walked on the coast in İzmir with her friends.

“I feel like a bird escaped from its cage,” Mehmet Ali Demirbaş, an elderly man resting in a park after a brief walk in the central city of Sivas said. “It has been 50 days at home. Our feet, legs felt numb. You know how a fish is glad to return to water? This is how I feel today,” he said. Gazi Erdoğan, another elderly man, likened the past months to “being in prison.” “This is really a festival for us,” he cheered.

Sixty-eight-year-old Yaşar Gönen, who walked and biked in the central city of Kayseri, told Anadolu Agency (AA) that he missed “doing exercises” outside most. “By God’s will, we will get rid of this virus and we will spend more time outside next time,” he says. Seventy-four-year-old Tahsin Dadaş, who spent his days of curfew praying, says he missed being outside very much. Ayşe Koçyiğit, 72, in the central city of Kırşehir, says she missed “shopping at the marketplace” as she browsed herbs at a stall in an open market.

Among those back on the street on Sunday were prominent figures. Eighty-year-old İsak Haleva, chief rabbi of Turkey’s Jewish community, went out in the company of his wife and son in Istanbul. Haleva, confined to home, met with his congregation online or over the phone. “We had to recite prayers online, and this is how I spent days,” he told AA. Haleva says he put on weight after spending time at home but found time to read books. “I thanked God as I left home,” Haleva says, adding that he hoped “those bad days will be over.” “If we follow the advice of the Health Ministry and care about social distancing, we will be reunited soon,” he says. Haleva said they prayed for President Recep Tayyip Erdoğan, “so God may grant him power (in the fight against the pandemic).” Haleva said Turkey and the Health Ministry acted exemplary against the pandemic, in terms of measures and sending aid to other countries.

The children will be next to benefit from eased restrictions. On May 13, children up to age 14 will also be able to go out within walking distance of their houses from 11 a.m. until 3 p.m. The same four-hour window will be open to those aged 15-20 on May 15. A curfew was brought in by the government for people under the age of 20 on April 4.

Turkey has not imposed a stringent nationwide lockdown since reporting its first positive case on March 11, resorting instead to weekend curfews in 31 provinces and cities. It also limited travel between those cities. Yet, last week, it announced a number of new steps toward “normalization,” including the reopening of some businesses and lifting travel restrictions between some cities. Barbershops, hairdressers and shopping malls will be allowed to reopen on Monday but with specific measures to protect against the coronavirus.

At a press conference where he spoke about the new steps, Erdoğan painted a bright picture regarding Turkey’s fight against the pandemic but also issued a stark reminder of the days to come. “We will gradually return to normal life, but there will be a new normal,” the president said, in reference to tight protective measures expected to continue for a while, such as mandatory masks and gloves and strict social distancing rules in public spaces. He warned that tougher steps would be taken if people fail to follow the rules.

Since March 21, around 7.5 million senior citizens have been under lockdown. To help them, the government set up Vefa Social Support Groups consisting of social service workers, gendarmerie officers and police. The groups all across the country provide for all the needs for the elderly, from shopping for groceries to harvesting crops in the fields of elderly farmers unable to leave home.