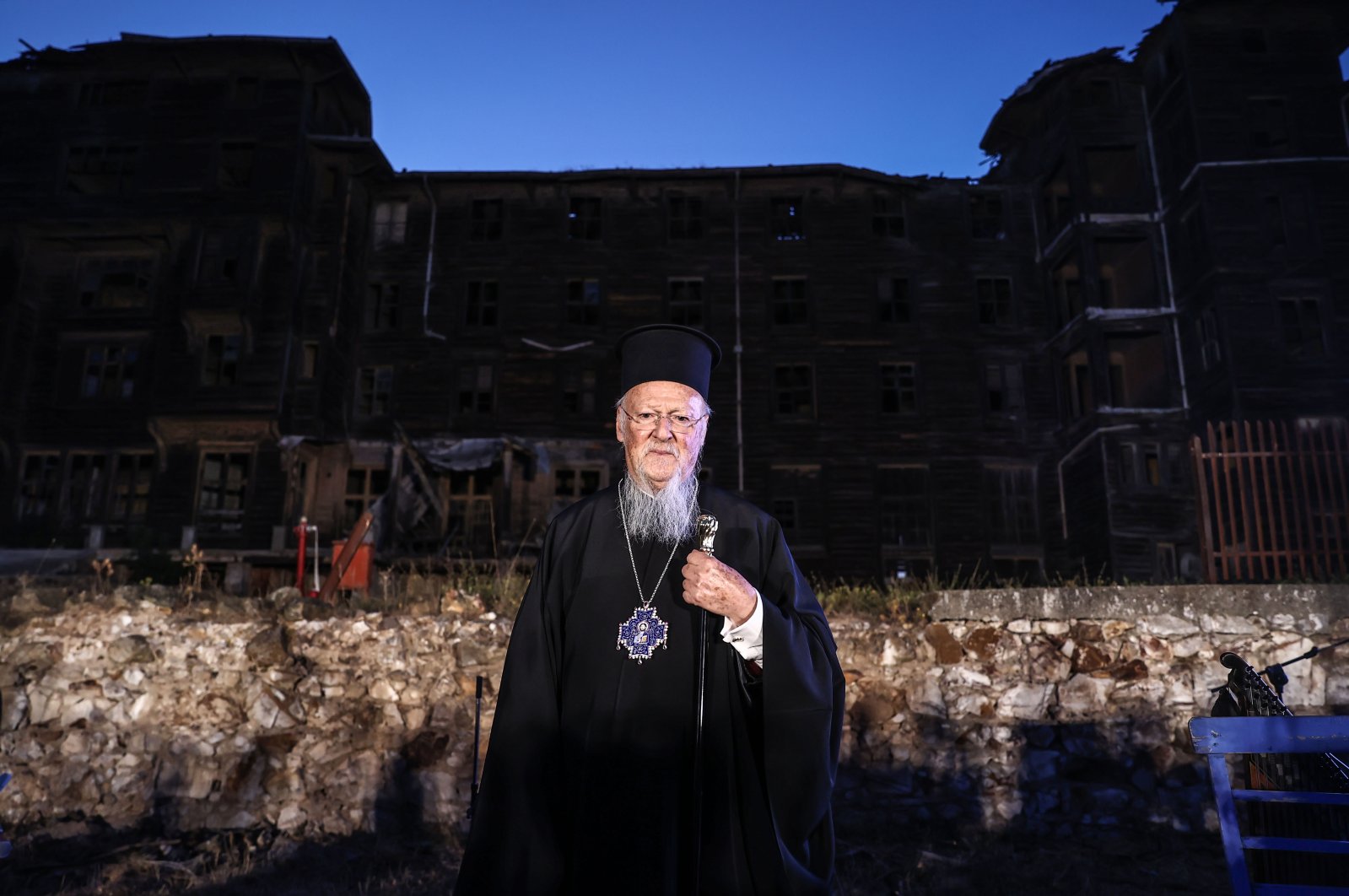 An event at Istanbul's historic Büyükada Greek Orthodox Orphanage, which has been closed since 1964, called for cooperation to launch a massive restoration project for the iconic building.

Speaking at the event Friday, Patriarch Bartholomew I, the Istanbul-based leader of many of the world's Orthodox Christians, said that the Fener Greek Orthodox Patriarchate is working to restore the building, also known as Pringipos Greek Orthodox Orphanage, despite all the technical and economic difficulties.

For restoration, "we wish to reach out to state authorities, municipalities, nongovernmental organizations (NGOs), and all Istanbul lovers to get their support," said Bartholomew, who hosted the event.

"Only with the strength to come out of such a comprehensive cooperation, this problem can be solved, and the orphanage can be brought back to Istanbul, which is described as the queen of cities," he said.

The cultural and architectural richness of the orphanage, dubbed the largest wooden structure in Europe and the second one in the world, can be transferred to the future following the restoration, he said.

Stressing the iconic building's architectural features, Bartholomew said that it was the "conscientious duty of everyone" to end the dissolution process that the orphanage has experienced in the last decades.

The building was constructed by Istanbul-born architect Alexander Vallaury in 1898 as a hotel. It was later bought by the wife of a Greek banker, Eleni Zarifi, who later donated the building to the Patriarchate, which operated it as an orphanage.

In 1964, the building was evacuated due to "the risk of fire and the lack of security for the children," according to the project's website. In 2018, Europa Nostra, a pan-European federation for cultural heritage, placed the building on the list of the seven most endangered heritage sites in Europe. The building originally was designed to be a hotel and casino, built by Compagnie des Wagons-Lits, the travel firm that operated the fabled Orient Express luxury train.

The event to promote the ongoing process for the historic building gathered experts and diplomats as well as intellectuals, including Turkey's Nobel Laureate Orhan Pamuk in the garden of the now almost demolished building, located in a forested area atop a hill on Büyükada, the largest of the Princes' Islands off the coast of Istanbul.

While details of the technical progress of the future restoration were explained to the public, it also was announced that a possible workshop, especially to clarify the function of the historic building, with broad participation would be held in the coming months.

For his part, Turkish Deputy Minister of Culture and Tourism Ahmet Misbah Demircan said, "We solved the problems related to minority foundations under the leadership of our President (Recep Tayyip Erdoğan)."

In 2008, under new legislation passed by Turkey's Justice and Development Party (AK Party), reforms allowed minority groups to buy and renovate their properties.

Stating that the iconic building is a first-degree protected area, Demircan said, "An invitation to a workshop about how it will be used is also made."

"In this process, we will try to do our part and do our best to raise (the building) up," he pledged.

Laki Vingas, the orphanage's restoration project coordinator, said that the preliminary work for the restoration has been completed.

Vingas explained the short-term goals of the project as "to present the temporary support measures for the preservation" of the pre-restoration building to Turkey's monuments committee, which regulates such restoration projects.

He also underlined the importance of "organizing a workshop with the participation of experts in September or October on determining the function of the building" as well as "identifying financial opportunities for the restoration."

Nazım Akkoyunlu, deputy general manager at BIMTAŞ, a company run by the Istanbul Municipality that is carrying out preliminary works of the restoration project, told the crowd a team of 30 people worked in the field for 45 days.

Sharing 3D photographs from the building, Akkoyunlu said: "Unfortunately, 50% of the roof is destroyed, all of it is damaged. Some 60% of the fourth floor has collapsed, and 40% of the third and fourth floors are broken."