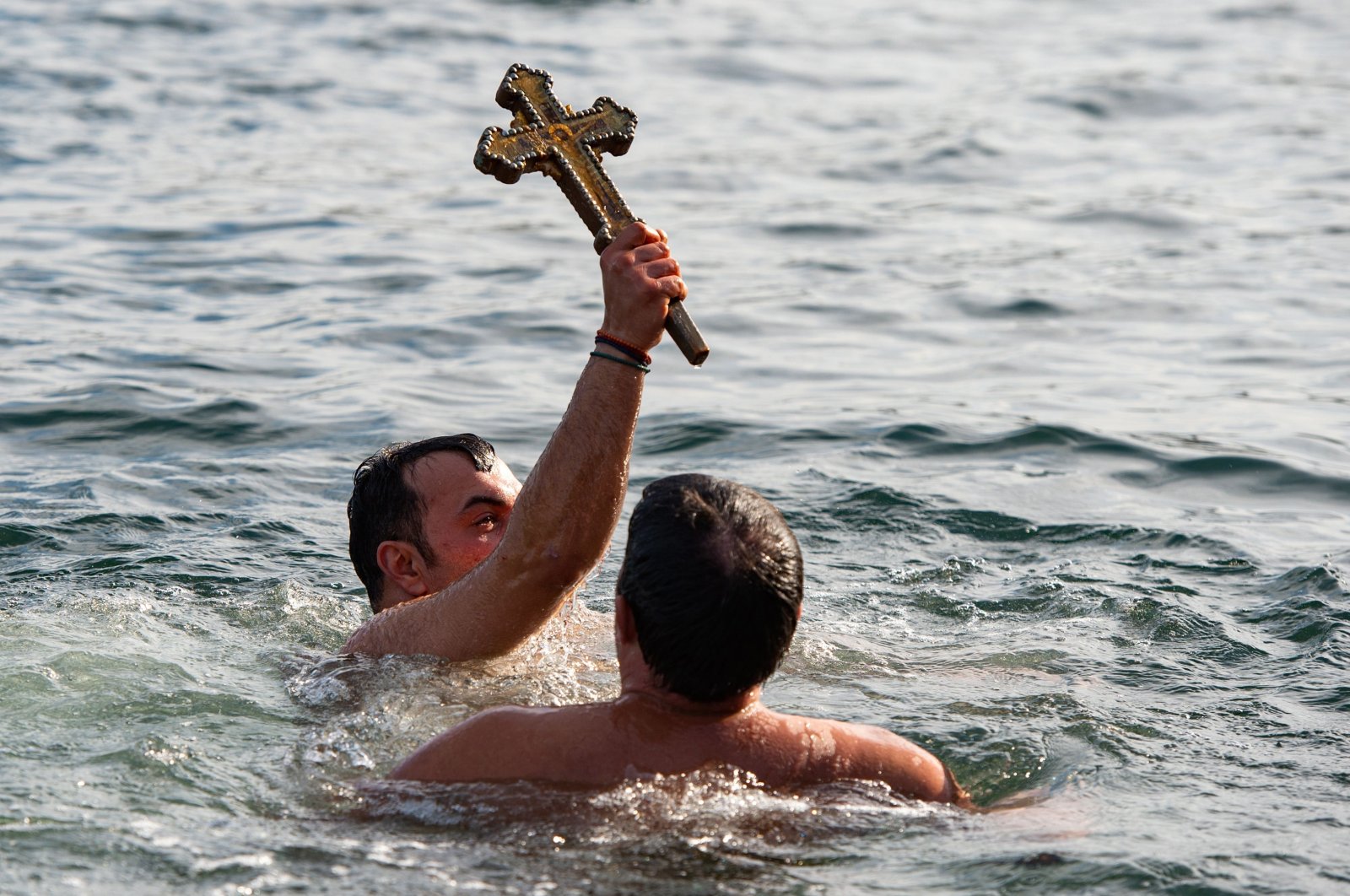 On Wednesday, Turkey's Orthodox community celebrated Epiphany, marking the birth and baptism of Jesus Christ. The normally joyous occasion in which a large crowds dive into the sea to retrieve a cross thrown into the water by priests was overshadowed by the coronavirus outbreak this year.

The country's Epiphany ceremonies were centered in Istanbul, home to the majority of Turkey's Greek Orthodox Christian community. But, unlike in previous years, only a select few were allowed to brave the cold waters and attempt to snag the cross. Religious services at churches before the ritual were held in front of a limited congregation in line with social distancing measures.

Fener Greek Orthodox Patriarch Bartholomew I, who leads a large congregation both in Turkey and abroad, joined bishops for an Epiphany ceremony at the Patriarchate located on the Golden Horn. After a four-hour religious service at the Patriarchate’s St. George (Aya Yorgi) Church, the patriarch led a small parade to Fener Port where two devotees in swimming trunks awaited them. Vasili Kürkçü, one of the two members of the congregation who jumped into the sea, managed to retrieve the cross, bringing it back to the patriarch.

“We had more people in the past but we are only two here because of the pandemic. The water was cold but the weather was sunny this year,” Kürkçü told reporters after the ceremony, adding that the lack of spectators from abroad this year due to COVID-19 travel restrictions was disappointing.

Kürkçü was gifted a golden cross by Bartholomew I. Galip Yavuz, the second swimmer who didn't manage to grab the cross before Kürkçü, said it was his fourth time in the race. “I always come in second and was second again though there were only two of us,” he told Ihlas News Agency (IHA).

Another Epiphany ceremony was held at Ayastefanos Church in the Yeşilköy neighborhood of the Bakırköy district. Niko Aslaner was the first to grab the cross thrown into the sea by Bishop Derkon Apostol. On the Asian side of Istanbul, a ceremony was held at the Ayios Yorgios Church in the Kuzguncuk neighborhood of the Üsküdar district. Ilias Ouanis Tawadros was the only faithful to jump into the sea to retrieve the cross.

The religious holiday of Epiphany is also celebrated in some Western Christian churches as Three Kings Day, which marks the visit of the Magi, or the three wise men, to the baby Jesus, and closes the Christmas season.

In neighboring Greece, churches held Epiphany services Wednesday, openly defying government COVID-19 restrictions that banned public gatherings including religious ceremonies on one of the most important days of the Orthodox calendar. Despite a plea by Prime Minister Kyriakos Mitsotakis for church authorities to set an example during a crisis that has killed more than 5,000 in Greece, worshippers attended morning services, although limits were placed on the number allowed into churches at one time. Police patrolled outside a number of churches but said they would not interfere with services and would use "mild" measures to persuade people not to crowd inside.

On Sunday, Greek authorities extended public lockdown measures, effectively withdrawing permission which had been granted previously to hold Epiphany services with a maximum of 50 people in attendance in large churches and 25 in smaller ones. On Monday, in a rare show of dissent, Synod leaders wrote to the government to say there was no justification for preventing Epiphany services. Until now, the church has largely respected curbs on religious services to limit the spread of COVID-19.