Miracles happen days after the deadly earthquake in western Turkey 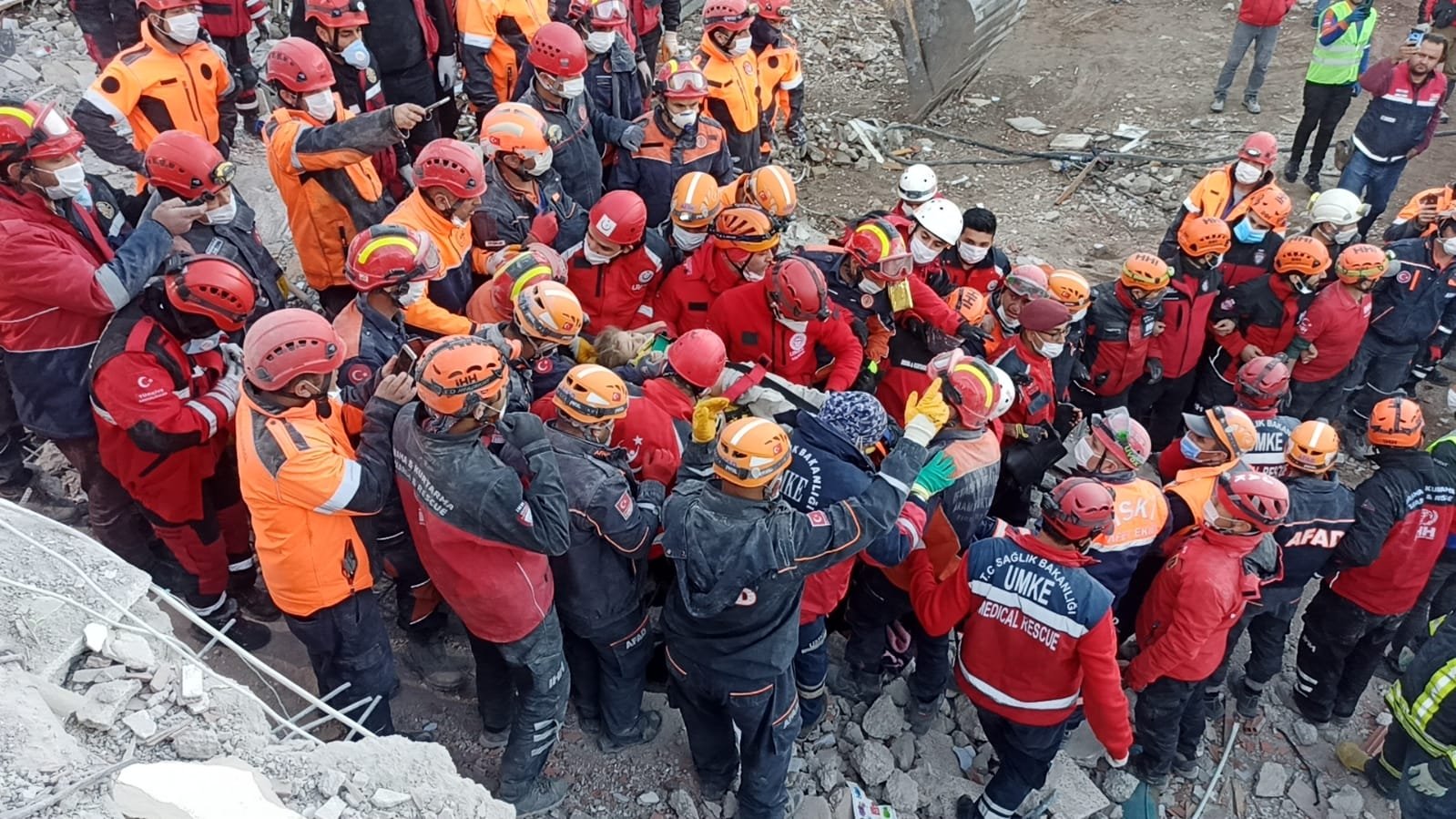 The death toll climbed in Friday’s earthquake that hit the western city of Izmir, but a 3-year-old girl rescued alive on Monday instilled hope in the search for survivors

Nearly 65 hours after the devastating earthquake that hit the western province of Izmir, 3-year-old Elif Perinçek became the poster child for miracles with her tiny hand cupping the finger of one of her rescuers.

She was rescued from the rubble of Doğanlar – one of the residential apartment buildings that collapsed in the disaster – later on Monday. The 3-year-old girl was the 106th person to be rescued by an army of search and rescue crews. Her mother Seher and two sisters had been rescued on the second day of the earthquake. The total death toll from the earthquake was 92 as of Monday while a total of 147 people were under treatment for injuries sustained during the earthquake.

Hours before Elif, 14-year-old Idil Şirin was pulled from the rubble amid the applause of rescue workers, but her 8-year-old sister Ipek did not survive.

For Elif, the miracle came from some 500 kilometers (310.7 miles) away. Her hero was Muammer Çelik, a veteran firefighter working at Istanbul’s fire department who joined his colleagues and rescuers from across Turkey to help the earthquake victims. Çelik pulled her to safety and recounted the moments to reporters at the scene, in tears. “Firefighters never lose hope until the paramedics come in and pronounce a victim dead. For Elif, we always kept our hopes alive. I was talking to her father before the rescue, and he told me he was ‘prepared’ for everything. I told him not to give up, and God always has miracles in store. He told me possible places Elif could be in the house, but I had my own experience and calculated where she could be. I moved to the opposite direction of one of those possible places. I thought Elif could be somewhere between the bed and a closet next to it. Indeed, I found her there, lying down. When I embraced her, she grabbed my fingers. I cleaned the dust from her face and moved her with the help of a colleague. She was clutching my fingers until I handed her to paramedics,” he recounted. “She deserves to live,” Çelik said in tears. “She is a miracle and should know that she has brothers at Istanbul fire department. We hope she will come and see us one day,” he said.

Speaking at a news conference in Izmir, Minister of Environment and Urban Planning Murat Kurum called on citizens to seek shelter at local guesthouses. "We began the process of setting up a container city. We will establish a container city with a capacity to host 1,000 people on an area of 46,300 square meters (498,000 square feet) in Bayraklı district," he said on Monday.

"We have a capacity of over 7,000 in public guest houses. This number can be further increased according to need," Minister of Family, Labor and Social Services Zehra Zümrüt Selçuk said at the same press conference. She said in addition to the TL 5 million in aid that was sent on Friday, another TL 5 million will be sent by the Family, Labor and Social Services Ministry to the region.

Some 1,120 aftershocks have hit the area since then, 43 of them above magnitude 4, the Disaster and Emergency Management Authority (AFAD) said. It added that 962 people were injured, with 743 of them discharged from hospitals and 219 people still under treatment. So far, 1,864 tents have been installed, with 2,038 currently being set up. Temporary accommodation has been established to meet the urgent need for shelter in the city. Over 3,500 tents, some 24,400 blankets, 13,300 beds, 5,500 sleeping sets, 2,600 kitchen sets and four showers and toilet containers have been shipped to the area, AFAD noted on Monday.

As the government mobilizes, locals do too. They have been serving meals to survivors who lost their homes or are afraid of going back home and spending days at tents set up by the municipality and national disaster management authority.

Mustafa Demirkan, a taxi driver, organizes meal deliveries for survivors in Bayraklı, one of the districts hit most by the earthquake. “I told my idea of handing out meals to people staying in parks, and now we cook and deliver meals together for 100 people every day. We set up a stall at children’s playground here and give out lunch and dinner meals,” he told Anadolu Agency (AA). “It is in our culture to share our food. We are going through difficult times, but by sharing, we will overcome,” he says. Onur Elmalı, who runs a restaurant in the city, delivers 1,000 food packages to survivors every day with his employees. “We wanted to be useful and try our best to help people. We are humbled when people thank us,” he says.

Though the magnitude of the earthquake was high, at least for Izmir which has not seen such a major earthquake for decades, only 58 buildings collapsed, partially or completely, or suffered damage. This raised the question of how those buildings, from among hundreds of others around them, succumbed to the tremors.

Turkey has a mix of older buildings and cheap or illegal construction, which can lead to serious damage and deaths when earthquakes hit. Regulations have been tightened in light of earthquakes to strengthen or demolish buildings and urban renewal is underway in Turkish cities.

The head of an association of building inspectors, a sector born after the great earthquake of 1999, claims that 17 buildings that collapsed in Friday’s earthquake were not “inspected,” and all were built “before 1999” before tighter regulations came into force to ensure the endurance of the buildings to earthquakes.

Some of the collapsed buildings were reinforced including the Rızabey apartment building where 17 bodies were found after the earthquake. In 2017 and 2018, the municipality of Bayraklı, where Rızabey, along with Doğanlar apartments are located, had issued a report warning that both buildings were at risk. Reports, released by broadcaster NTV, show they were certified “not endurable” to an earthquake, and the quality of concrete quality was poor, citing a high risk of collapse. The broadcaster reported that both buildings were constructed under a regulation dating back to the 1970s and residents were urged to evacuate the buildings.

Alican Alpgündüz, former superintendent of Rızabey, whose twin children were among those trapped under the rubble, acknowledged the reports and said his efforts for evacuation failed. He told the Hürriyet newspaper that the reports were issued when he along with other residents applied for risk assessment years ago. “We have suspected that the building’s foundation was not very solid. We tried to convince people to evacuate, but the majority of them were tenants. Owners of flats were out of town. We planned to hold a meeting to coordinate an evacuation or measures but nobody came,” he said. Alpgündüz said the first four stories of the building were reinforced earlier after a previous earthquake.

Investigations are already underway on the state of buildings before the earthquake and to determine the culprits.

Another building, Emrah, succumbed to the earthquake. The building was named after the grandson of the building’s construction contractor Hayati Uzun. Uzun lost Emrah in a 1992 earthquake in the eastern province of Erzincan and settled in Izmir after the disaster, a report in the Hürriyet newspaper says. In 1993, he built a building with 28 flats in Bayraklı district and served as its superintendent for years before moving to another town. His son’s family stayed. His son Bora was rescued while his two grandsons and daughter-in-law died. The building was reinforced against an earthquake a decade ago, but apparently, it was not enough.