More than 60% of citizens approve of Turkey’s virus response 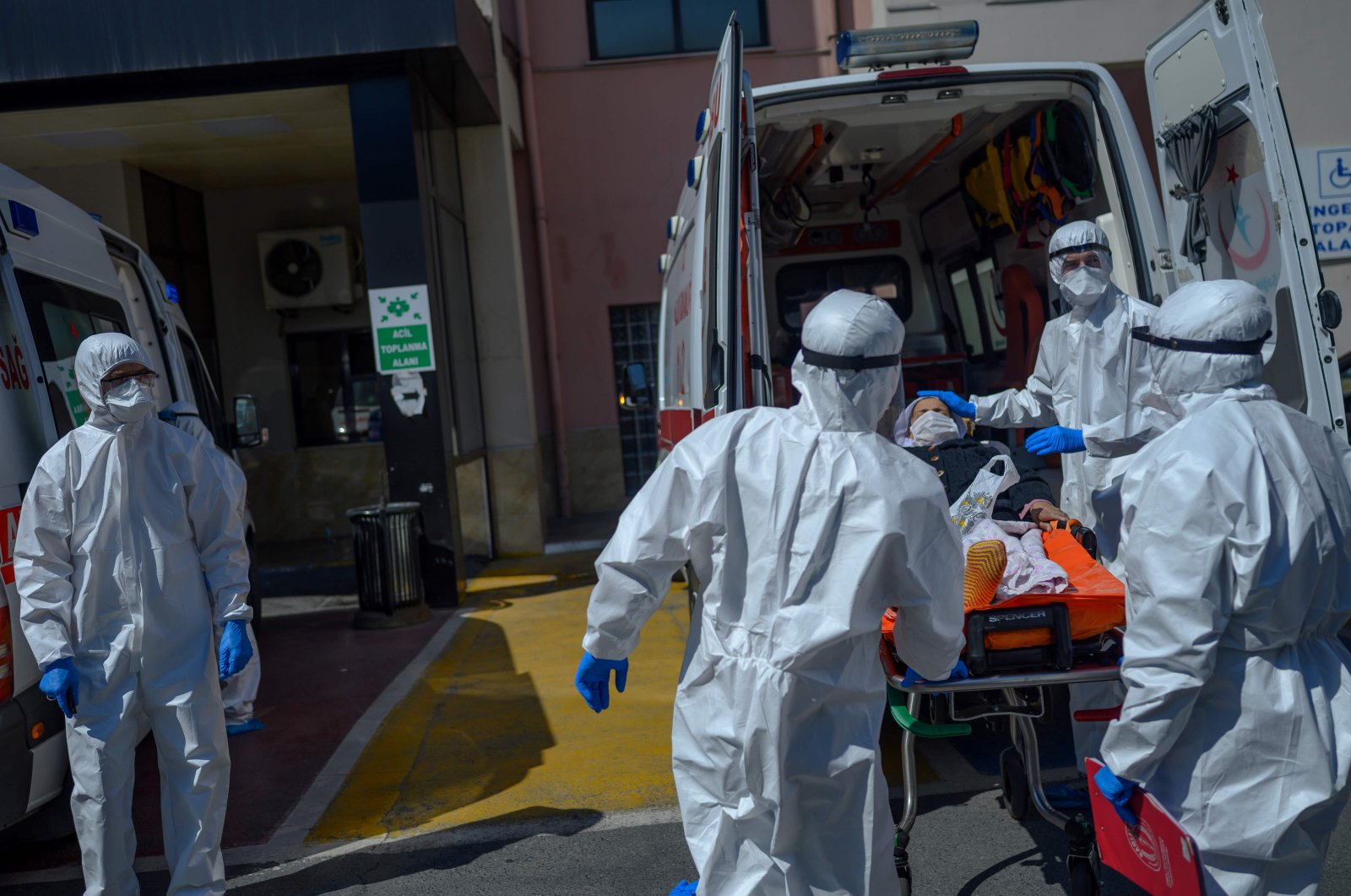 Health workers transport a patient suspected of being infected by the coronavirus in front of Bağcılar public hospital in Istanbul, Turkey, April 28, 2020. (AFP Photo)
by DAILY SABAH May 03, 2020 1:13 pm

With the number of new coronavirus cases falling steadily for the last 10 days, nearly every two out of three citizens said they approved of Ankara’s actions against the COVID-19 outbreak, according to a recent poll

The number of people approving of Turkey’s measures and precautions to stop the spread of the COVID-19 outbreak in the country has seen a significant surge, according to a recent survey, with 63% saying they approve of Ankara’s moves.

The survey of 2,191 people, conducted and published by NG Research, found that the number of people backing Ankara’s moves increased by 19%, from 44% in the last poll two weeks ago.

The uptick in approval rates coincides with an apparent plateau of the coronavirus outbreak in Turkey. The number of new virus cases has been falling steadily since April 21, while the number of patients recovering from COVID-19 has increased dramatically.

On Saturday, Health Minister Fahrettin Koca said 1,983 new cases were confirmed in the past 24 hours, the lowest number since March 30, while the number of people recovering from the virus neared 60,000 with 4,451.

The total number of fatalities has reached 3,336 with 78 new deaths, while the number of patients still in intensive care stood at 1,445.

The survey found that people’s fear of the virus has been decreasing as well, with the number of people saying they were scared of contracting the virus falling from 80% to 77%, a slight yet unsurprising decline given the recent case numbers.

In testing, the rate of people liking Ankara’s capabilities increased by 14% to 49%, as Turkey surpassed the 1 million-unit benchmark in total COVID-19 tests carried out since the outbreak first began in the country on March 10.

While only half of the participants found Turkey’s testing numbers adequate, Koca and other authorities repeatedly attributed the country’s success to its testing capabilities.

Statistics on the Health Ministry's database show that Turkey significantly increased the number of tests conducted since late March, from a daily average of almost 11,500 tests during the early days of the outbreak to nearly 40,000 in the past few days.

Testing is critical to control the coronavirus and eventually ease the restrictions that have halted daily life for millions across the world.

With severe test shortages affecting governments across the world, strict prerequisites have been placed on who is eligible to get tested, often requiring a potential patient to have come into contact with another confirmed patient.

While most countries, including Turkey, have relaxed those requirements since then, as tests have become more accessible and production rates have increased, the strict prerequisites led many European countries to lag behind in testing and realizing the true scale of the outbreak.

In order to dissuade citizens from giving in to the allure of the increasingly sunny weather and thereby undermining anti-COVID-19 measures, Turkey ordered a total curfew to be imposed across the country's largest cities for the first time on April 11-12.

Ankara also restricted travel from the cities listed, barring any entry and exit by land, air and sea except for the movement of goods and public personnel on official duty.

The government has previously ordered a curfew for anyone 65 or older, as those are most vulnerable to the disease, later extending the ban to those under 20 after it appeared that many young people, falsely believing they were safe from the virus, continued to socialize.

Regarding a total lockdown during weekdays that includes all provinces, 63% of the participants said they backed the idea, while 22% said they were against such measures.

Answering questions about their lifestyles during the pandemic, a quarter of the participants said they refused to leave their homes under any circumstances, while 38% said they only go out when it is absolutely necessary.

Only 14% said they had to leave their homes to go to work, as most of the offices and businesses switched to working from home to reduce the risk of infection.

Regarding activities done at home during the lockdown, watching movies and TV series came out on top as 70% said they liked to spend their free time in front of a screen. Browsing social media and doing house chores followed.

Asked about any potential silver linings of the outbreak, most of the participants said they believed it was good for the environment. Others said staying at home allowed them to spend more time with their family, while some said they invested their new found free time into learning new skills.