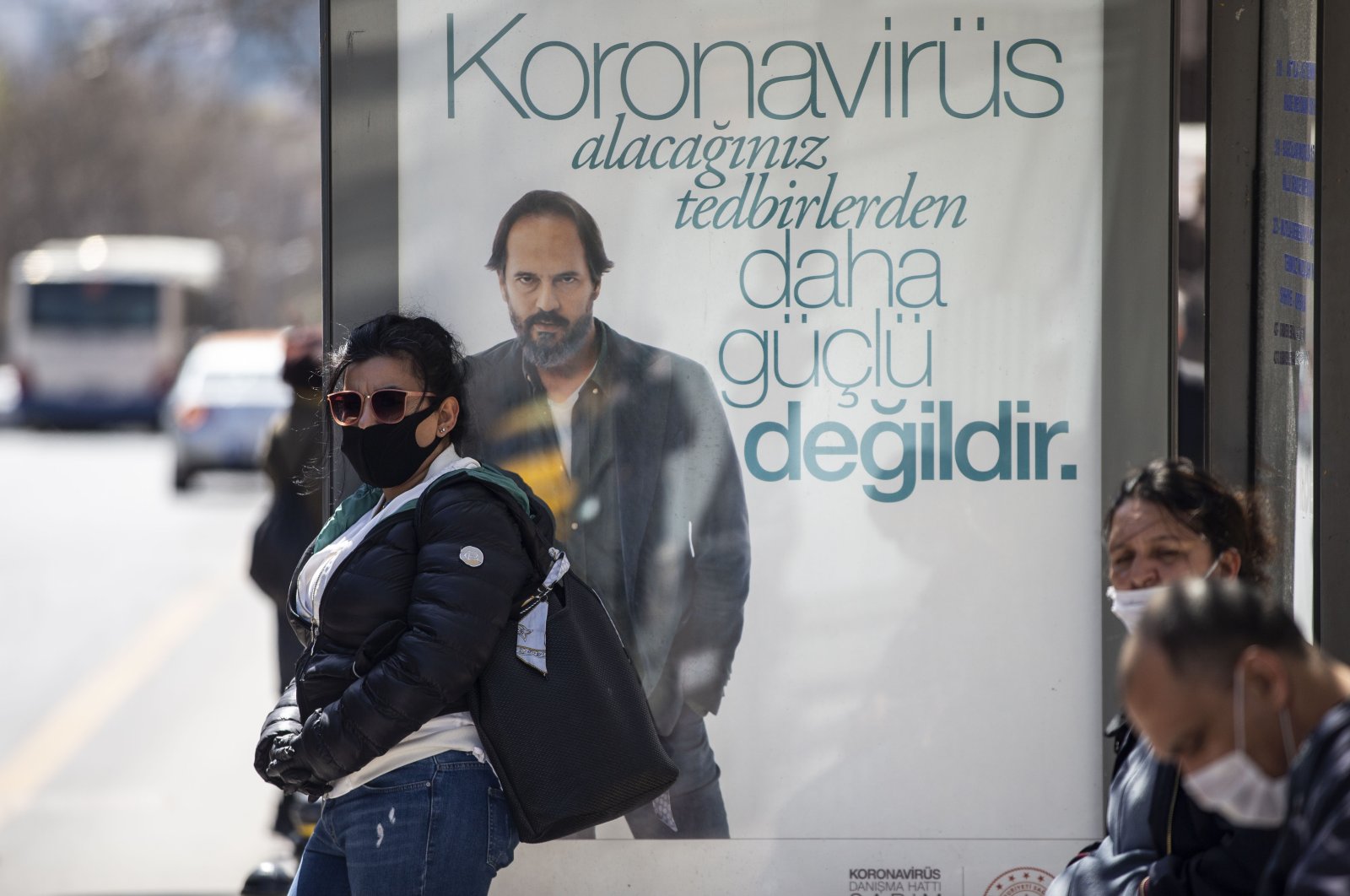 A woman wearing mask stands in front of a poster reading "coronavirus is not stronger than measures you will take," in Ankara, Turkey, Tuesday, April 7, 2020. (AA Photo)
by DAILY SABAH WITH AGENCIES Apr 07, 2020 1:17 pm

Turkey will establish two new hospitals with a capacity of 1,000 beds each in Istanbul to aid in the fight against the coronavirus pandemic, President Recep Tayyip Erdoğan announced Monday. According to Erdoğan, one of the hospitals will be built in Atatürk Airport located in the Yeşiköy district on the city’s European side, while the other will be built in Sancaktepe on the Asian side. The construction will be completed in 45 days.

The country also launched the plasma therapy tests on Tuesday as a possible treatment for COVID-19, the life-threatening disease caused by the novel coronavirus.

The number of confirmed coronavirus cases in Turkey has increased by 3,148 to 30,217, Health Minister Fahrettin Koca announced Monday. Koca said in a statement he shared on his Twitter account that 75 patients have died in the last 24 hours, bringing Turkey's total virus death toll to 649. According to the statement, 1,415 patients are in intensive care, while 1,326 have recovered so far. In the past 24 hours, 21,400 COVID-19 tests were conducted, while the total number has reached 202,845, he said. Koca noted that Turkey aims to conduct 30,000 tests daily.

Officials assure the public that Turkey’s hospital capacity is sufficient to cope with a likely surge in coronavirus cases. City hospitals, massive medical complexes opened in several cities over the past few years, are contributing to the fight against the outbreak. A brand new environmentally friendly hospital in Istanbul opened its doors earlier than expected last week amid the pandemic. The Islamic Development Bank (IsDB) Group provided 158.9 million euros (TL 1.17 billion) for the Okmeydanı Hospital project which was expected to be completed and officially opened in May.

Meanwhile, Turkey on Tuesday started testing plasma therapy as a possible treatment against the virus, with a “donation ceremony” at a health center run by the Turkish Red Crescent (Kızılay) in the capital Ankara. Kürşat Demir, a doctor who recovered from the coronavirus, was the first plasma donor for the project.
Demir said he felt fine after recovery. “Symptoms emerged three weeks ago and I had a test. I was infected and to be honest, I was worried because there were only about 200 cases in Turkey when I was diagnosed with COVID-19. I wanted to help others when I recovered,” he said. Demir called on others to donate to the campaign, assuring there was no harm to the body. “It is no different than donating blood,” he said.

Turkish Red Crescent President Kerem Kınık said the Health Ministry shared the information of about 400 recovered patients with them as part of the plasma collection campaign and they were capable of receiving donations from 750 people daily. “We have facilities in Istanbul, Gaziantep, Trabzon, İzmir, Ankara, Adana, Samsun and Denizli for plasma donations and we also have four mobile trucks that will visit cities for donors. Donors can donate in three instances at one-week intervals,” he said. Kınık highlighted that it was not the ultimate treatment for the virus but rather a complementary method to the existing treatments.

Pandemic hospitals and Turkish Red Crescent health centers across Turkey are gearing up to test if this century-old treatment used to fight off flu and measles outbreaks in the days before vaccines will work for COVID-19, too. Using blood donated by patients who have recovered from COVID-19, medical experts are hoping that the serum therapy, tried more recently against SARS and Ebola, will offer effective treatment for the sick and temporary vaccine-like protection for health care workers and those with weak or suppressed immune systems.

The therapy will test if giving infusions of survivors' antibody-rich plasma to COVID-19 patients who have been intubated in intensive care units and have begun to show alveolar damage or those having trouble breathing would boost their own body’s defenses to help fight off the virus. Instead of a therapy to replace all other conventional treatments, it would be used as a complementary therapy in severe cases.

There are several prerequisites to be a plasma donor as part of the scheme. Firstly, the patient must have tested positive for the coronavirus, so there must be evidence that they were, indeed, infected by it. Secondly, they must be discharged from the hospital and declared virus-free. Then the waiting game begins. Fourteen days after the patient shows no symptoms of the disease, they are again tested via nasopharyngeal swab, the results of which should be negative for the virus, and via blood tests, which see if the patient has produced the necessary antibodies. Plasma works using the same principle as a vaccine, but unlike a vaccine, any protection would only be temporary and offer passive immunization. A vaccine trains people’s immune systems to make their own antibodies against a target germ – which could be attenuated or inactivated viruses and bacteria or small parts of them. When these germs enter the body again, they know how to deal with or defeat them. The plasma infusion approach would similarly give people a temporary dose of someone else’s antibodies that are short-lived and require repeated doses.

The pandemic is particularly affecting the country’s elderly and homeless populations. The homeless, struggling on the streets with few places to go except municipality shelters with insufficient capacity, will now be aided by the government. Minister of Family, Labor and Social Services Zehra Zümrüt Selçuk announced Tuesday that the homeless will be accommodated at guesthouses in every province. Guesthouses, normally reserved for traveling civil servants, will house the homeless who will be regularly examined for COVID-19. Selçuk said they would also deliver basic aid for them, from food to clothes and hygiene kits. The ministry’s social aid foundations will cover their needs. If guesthouses do not exist or do not have the capacity to accommodate the homeless, the ministry will oversee their accommodation at hotels and similar places until the pandemic threat has passed.

With millions of senior citizens confined to their homes due to the coronavirus pandemic, authorities are also ensuring their daily needs are met swiftly and that help is just a phone call away.

To protect the public from the pandemic, the Interior Ministry has restricted the movement of people 65 and older and mobilized support groups to help them during the self-isolation period. Senior citizens can contact the police or other groups through dedicated hotlines to convey their needs. Social assistance groups, made up of officials from the police, gendarmerie and a disaster relief agency, then bring them whatever they need, including food, household goods and even pension payments. According to the ministry, to date the support groups have assisted more than 1 million people.

Among the millions of elderly people in self-isolation is Osman Kurtulan, 66, a retired salesman who has been living alone for a decade after his wife passed away. "At first I didn't like the idea of being confined to my house. But I know I have some breathing problems, and this virus is more dangerous for people like me, an old man with health problems," he said. He said the greatest challenge of self-isolation is loneliness, something he has experienced since his wife died and his children moved out. "You know, my sons would call me every two weeks before this virus. Now that they know I'm stuck at home all alone, they're calling every day. Ironically, this virus has had a positive impact on our relations," he said. Kurtulan said he was initially worried by the coronavirus outbreak but felt better knowing that the police and health care workers were always available to help him. "I haven't had the need to call the authorities yet as I have everything at home and my health is stable. But it's great to know that help is always just a phone call away."

Aytaç Komşucu, a psychologist with seven years of experience in the field, said elderly people often have a fear of death and loneliness, and the pandemic could add to their anxiety. He said now it is more important for relatives and friends to reach out to the elderly. "Fear of death is a common issue among the elderly, and any sort of health problem, whether it's something serious or just a common cold, can trigger an emotional response," said Komşucu. He explained that self-isolation is tougher for the elderly as it is more challenging for older people to change their daily habits, such as going to mosques or churches or gathering with friends at public places. "The younger generation must help them through this time; we need to see this crisis as an opportunity for us to develop closer relations with our elders," said Komşucu.

He said the Health Ministry's move to provide counseling services over the phone is important given the uncertainty the pandemic has caused among the elderly.

According to Komşucu, high stress levels can lead to fatigue and insomnia among the elderly, weakening the immune system and making recovery even more difficult.