No hugs Mother's Day celebrated amid pandemic in Turkey 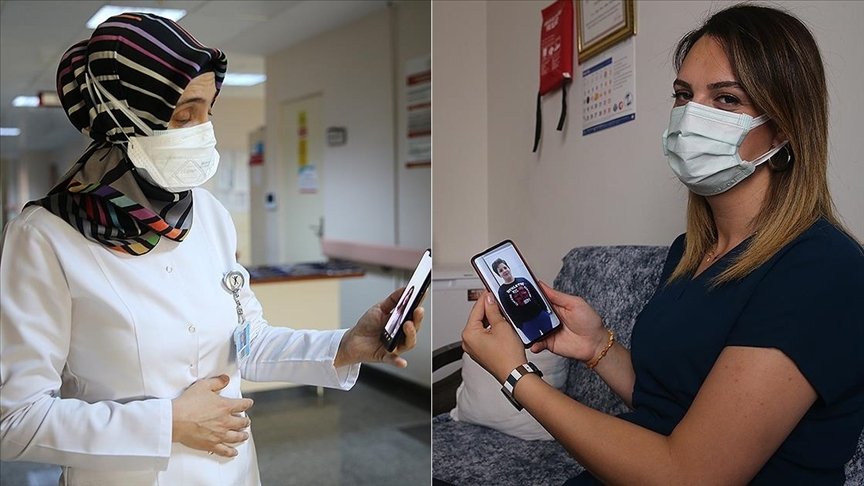 The ongoing coronavirus pandemic robbed Mother's Day of signs of affection, while mothers working in health care feel the pain of this absence and separation from their children the most

Mothers and their children marked Mother's Day Sunday across the country. The occasion was no different from previous years for those living with their mothers, who could offer them good wishes, kisses, hugs and gifts, while those living apart had to settle for video calls. For mothers working in the health care sector, however, living in the same house was still an obstacle to spending the day with their children.

On the front line in the fight against the coronavirus, they spent a second Mother's Day away from their children, longing for a pure hug and kiss. Since the outbreak of COVID-19, health care staff have faced two options to prevent the risk of transmission – live a separate life from their families or live a self-isolated life in the same house. The forced situation separates children from their parents and the longing is accentuated by the occasion of Mother's Day.

Yeşim Selçuk Taşdemir, an intensive care unit nurse at an Istanbul hospital, is one of the mothers who has been fighting at the forefront against the coronavirus for around a year. She left her son to her loved ones to take care of when he was just 1 year old while she took to the front line. "I have a child who is 2.5 years old now. I had to stay away from him while working at a COVID-19 intensive care unit. It was very difficult.”

Taşdemir said when she contracted the virus, she lost her sense of taste and smell but the only thing she asked her husband for was a piece of clothing of her son. "When I recovered my sense of smell, I wanted to sense his smell first,” she recalled. Later, Taşdemir's little son was also infected with the virus after one of her family members tested positive. "Then I realized more clearly that I was not worried about myself at all, and that his catching the virus had worn me out much more,” she said.

We miss both our children and parents, she said and added, "We feel bitter, we won't be able to hug or kiss (our children).” Taşdemir said she hopes to speak of good things on the next Mother's Day.

Zeliha Gürlek Ustabaşı, a doctor at the same hospital, said that she loves her job but has been going through a very difficult time for 1 1/2 years and sometimes she feels inadequate as a doctor. With her fight ongoing both at the hospital and at home, she said she put great effort into not infecting her children and loved ones. Ustabaşı said her mother takes care of her two children aged 4 and 6. "I couldn't play with my children for a long time. The smell of your children is really something you miss,” she said. Stressing that the virus claimed many young lives, she urged people to comply with measures to stay COVID-19-free.

Dr. Deniz Sevindik Günay, an internal medicine specialist at Ümraniye Training and Research Hospital in Istanbul is a mother of a 3-year-old. "He was scared at first and was asking if I would die (of COVID-19) and now he views me as someone who saves lives," she says. Günay said that they developed a new routine. "He asks me if I examined a patient with COVID-19 when I go home and he skips hugging me if I say yes. But I still fear infecting him when I kiss him even if I don't attend COVID-19 patients at times. I wish I could hug him freely," she laments.

Neslihan Bilge Işık, a nurse working at a COVID-19 ward at the same hospital, is a mother of a 2-year-old daughter. "I am a nurse of 16 years and never felt as tired as I have been since last year. It is a tough phase," she says. Her daughter "doesn't know" how to hug her. "Because we never did it. I bathe her when I go home but with caution and I still cannot hug her because I am scared. It is very hard to accept this fact. I am still in a better place because I can see my child more but most of my colleagues could not contact their children in person for months," she said.

Mother's Day has also been a celebration of life for children whose mothers were infected and beat the coronavirus – 61-year-old Gülöz Daştan is one of them. She said that when she first found out she was infected with the virus, she felt shocked as she was tested negative in her PCR test. "Not being able to breathe easily was completely terrifying for me. Even when they said that I needed to be hospitalized, I was absolutely scared to death," said Daştan. "It took at least 15 days to get better for me. I spent five days at home at first but was later taken to hospital when things got worse." She mentioned that she was in a hospital room with only one patient bed inside, she recalled that "she felt lonely as no one could come and visit her besides the doctors or nurses."

"Catching the virus and being in a hospital all by myself pushed me to a feeling of pure loneliness. I was separated from my loved ones. I always thought about my family and the ones that are dear to me. I wondered if I could ever go back to my home," said Daştan. "However, the video that my two daughters prepared for me not to feel lonely anymore gave me strength to hold on," she underlined. "When I recovered and was released from hospital, I felt grateful that I was back with my family and loved ones, especially for having my health back. It was like waking up from a nightmare."

Aslı Cengiz, the older daughter of Daştan, said when she first heard that her mother was infected with the virus, she had difficulty believing it. "I always thought that this could never happen to any of us until my mother was hospitalized," said Cengiz. She recalled that "Later on, I started to accept the truth and felt anxious. As soon as I accepted that my mother was really COVID-19 positive, I figured out the seriousness of Turkey's situation about the outbreak. My mother would never go out if not really necessary during the pandemic, and if she got infected with the virus, then anyone can test positive," emphasized Cengiz.

"However, despite all the difficulties this period brought, my mother finally recovered from the virus, and I felt as if a huge burden had been lifted from me," she said. "I felt great joy when I received the good news because when most COVID-19 patients were getting their treatment at home, my mother was in hospital. Her recovery felt like a resurrection for me. I thank God for giving my mother back to me, to us," she added.

Selma Doğru is another mother who tested positive and then recovered with time. The 41-year-old mother said that when doctors told her that she was infected with the virus, "I didn't know what to do, what to think at first. Later, I couldn't think of anything or anyone else but my children. I thought what would happen to my children if I couldn't survive this disease," said Doğru and added that the only thing she felt at that time was pure fear itself.

"It took about a month to fully recover for me," she said and mentioned that she received her medical treatment at home. "The disease changed how I perceive life. I understood that we have nothing without good health. I learned to enjoy and appreciate every second of my life because I felt like I was reborn when doctors told me the good news."

Doğru's younger son, Bora Ismail, said that when he first heard his mother tested positive, he was scared to lose her forever. "But then I thought that my mother was strong enough to overcome this disease," said the 14-year-old. "I understood that every second I spend with my mother is so very precious," he underlined and added that he felt utterly happy when his mother recovered.

Buğra Doğru, her older son, expressed that he was frightened that something terrible would happen to his mother and he thought for a second that his mother could not recover from the virus. "I noticed the importance of my mother. I've learned what a blessing even sitting together is," he said. "I felt amazingly joyful when my mother got better," he said and mentioned that he also appreciated how severe this disease is when facing the possibility of losing his mother.

The country is currently under a lockdown that will end May 17. The lockdown involves a ban on intercity travel, which means that mothers and children living in different cities are forced to mark the day separately. Authorities have allowed florists' shops to remain open for the day while most businesses, except for e-commerce that sells gifts for the occasion, are closed.