One year on, Turkey walks thin line in fight against pandemic 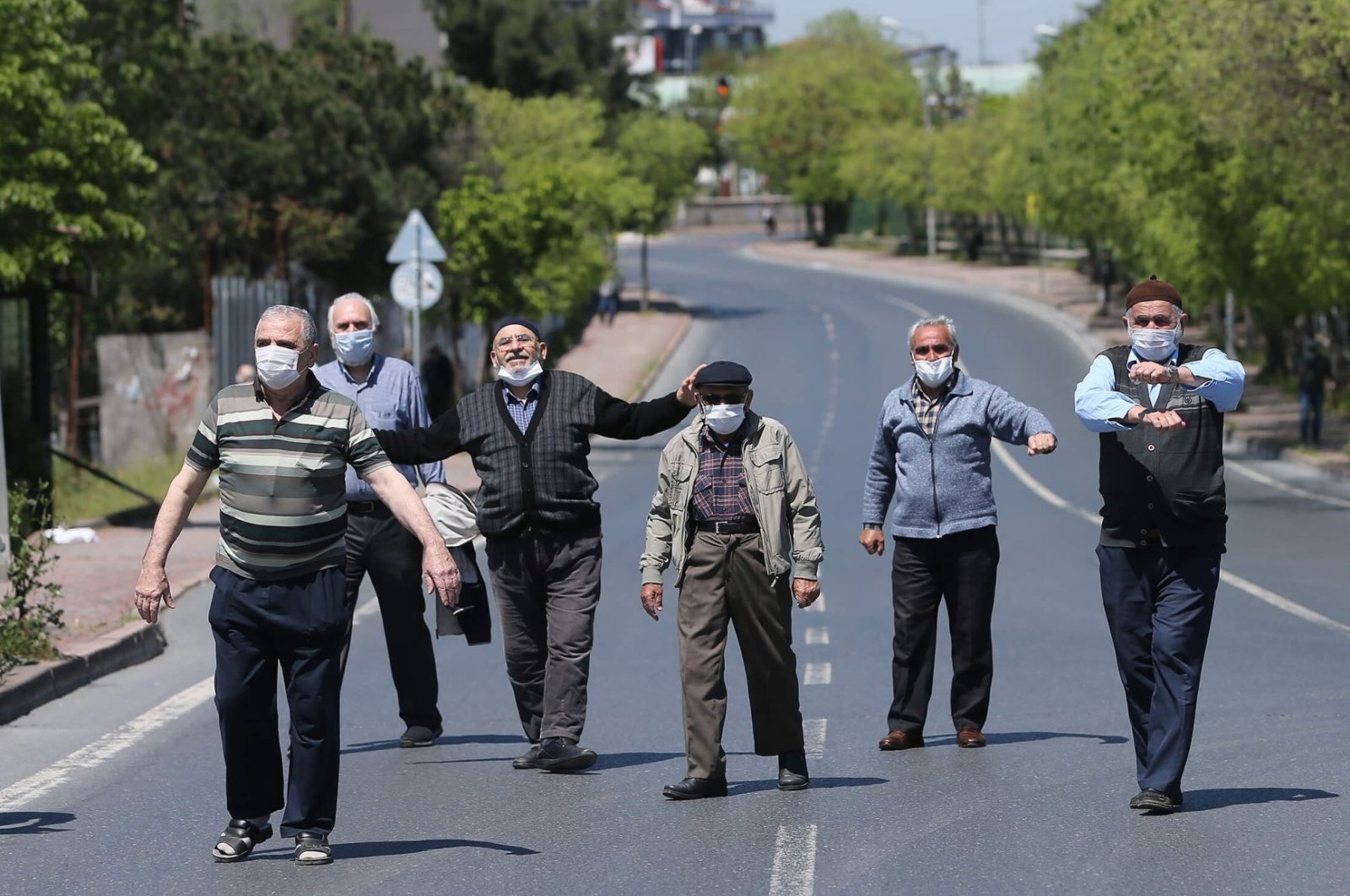 It has been one year since Turkey reported its first COVID-19 cases. Despite success in the fight, a new surge raises concerns as the country seeks to balance normalization with prevailing measures to curb infections

“It won’t be possible to stay away from this disease,” Health Minister Fahrettin Koca remarked on March 9, 2020, two days before he reported the country’s first coronavirus case. He was speaking at one of the first meetings of the ministry's Coronavirus Scientific Advisory Board, which would be followed by countless others. Days earlier, Turkey had started evacuating its citizens from China’s Wuhan where the first cases in the world were reported.

Since then, a year has passed and the pandemic radically changed the lives of more than 83 million people. At times, the country seesawed between waves of new infections and times when the new cases hit new lows. Overall, Turkey largely succeeded to stave off larger waves but at the cost of stifling the population with tight restrictions. Nowadays, it aims for a gradual return to the pre-pandemic era, except ubiquitous masks, social distancing and hygiene rules. This new, challenging process, however, is occasionally shaken by news of rises in daily cases, which might necessitate introducing new restrictions, or rather, bring back the old ones, like partial lockdowns.

So far, Turkey recorded more than 2.8 million cases, and 29,160 people lost their lives. Recoveries since March 2020 exceeded 2.6 million. Health care workers conducted 34.4 million tests to find positive patients. As of Wednesday, it delivered more than 10.3 million jabs of CoronaVac, the only available vaccine against coronavirus in the country, about two months after a nationwide inoculation drive began.

As countries were trying to weigh the scale of the impact of the virus first reported in China, Turkey was quick to draw guidelines on fighting a possible outbreak. On Jan. 10, the Coronavirus Scientific Advisory Board, composed of prominent medical professionals specialized in infectious diseases, was formed. The board, which has shaped the daily lives of millions since its inception, was behind decisions to impose a set of measures, including setting up thermal screening at airports and medical checks for passengers arriving from countries with reported cases. It also planned the evacuation of Turkish citizens from virus-hit countries. On Feb. 5, 2020, flights from China were suspended.

But the outbreak was closing in on the country. Yet, despite its emergence in neighboring Iran, which forced the country to close borders with Iran on Feb. 23, 2020, the first coronavirus case in the country, announced on March 11, 2020, was a citizen who recently traveled to Europe. Seven days later, the country reported the first death from the coronavirus, an 89-year-old patient who came into a contact with another patient with “China contact.”

On March 12, 2020, authorities announced a string of restrictions, including the cancellation of social activities at schools while the army canceled weekend leave for conscripts. “Let us resist for two months. The virus will be less effective in summer. If we take measures, life will be back to normal within two months,” Koca had tweeted on March 12, 2020. Though it may be viewed as short-sighted today, the minister was merely echoing what the scientific community thought then, that the virus would cease its impact in warmer weather. Indeed, the cases dropped a bit in the following summer, but the outbreak was here to stay.

By April, Turkey had imposed flight bans on dozens of countries, shut down schools and canceled sports events, and thousands of citizens who arrived from abroad were placed in quarantine in student dormitories, which were vacated when universities were also shut down. Entertainment venues were closed while mosques were off-limits for congregational prayers. But the most dramatic restriction, which continues to this day although in a more relaxed manner, was a curfew for people aged 65 and older and those below the age of 20, two age groups under risk of infection and infecting others easily. More restrictions followed, including limited working hours for supermarkets and special permits for domestic flights.

In April, the first curfews, which have been a staple of life since then, were declared for 31 cities. Months later, they were expanded to all cities.

Upon a drop in the number of cases, the government decided to launch the country’s first “normalization” process in June, lifting travel restrictions and curfews and reopening restaurants, wedding halls, cinemas and several other venues. The outbreak was seemingly under control during the summer, as people in big cities headed to resort towns for a lengthy summer holiday. Though crowds were still a common sight, people were apparently more isolated. Unfortunately, what experts feared with the onset of autumn, when people tend to spend more time indoors, happened, and the country started seeing a new surge in the cases. In November, most restrictions made a comeback, and they are still in place to this day. Since March 1, however, Turkey has pursued a gradual normalization process, allowing provinces with a low number of cases to reopen restaurants, cafes and other businesses and easing weekend lockdowns.

Professor Nurettin Yiyit, who serves as chief physician of both a training and research hospital and a newly built pandemic hospital in Istanbul, says Turkey came a long way from the early days of struggle against the outbreak. “We know more about the virus, and we are more experienced,” he told Demirören News Agency (DHA) on Wednesday. But the risk lingers for the country’s most crowded metropolis. “We used to have people at the age of 65 and above more hospitalized in our hospitals, but now, we see more and more patients between the ages of 40 and 60. I think it is something to do with vaccination,” he says. Senior citizens are prioritized in the nationwide vaccination campaign.

For Yiyit, one year with the pandemic was one of the busiest ever he had in his career. “We did not know much about the virus at first, and our priority was organizing the treatment methods for patients. We were concerned about bed capacity and the need for ventilators. But in time, we learned how to improve the health condition of patients, to eliminate the need for intensive care. We modified our treatment methods accordingly,” he says. “We may have exaggerated the protective measures at hospitals at first, but we now know what protection is better. We know which masks, face shields and other personal protective equipment (PPE) is better. Health care workers had to separate from their families for weeks in the first months of the outbreak, but they now know how they can protect themselves and their families. In a way, we are in a controlled normalization process,” he says.

Yiyit points out Turkey’s accomplishment in imaging as one of the factors in fighting the outbreak. “The imaging is widely available and enabled us to correctly diagnose the disease. We also managed to accelerate results for polymerase chain reaction (PCR) tests which used to give results in two to three days at first, due to a busy schedule. Now, we can produce results in hours,” he says. For Istanbul, the burden on health care was eased with the construction of new hospitals and early opening for hospitals under construction. “Eight more hospitals were opened, and we had an additional 3,000 intensive care beds,” he underlines.

The pandemic derailed the lives of millions, but it took its toll most on health care workers, “warriors” of this unprecedented war against an invisible enemy. They lost lives, were embattled with the virus and were separated from their loved ones while helping thousands of others to recover from the virus.

The results of the survey show the majority of health care workers feel burned out and were suffering from stress-related problems. The union presented the results to Health Minister Fahrettin Koca. “Certainly, not all the problems they faced can be resolved overnight, but their complaints should not be ignored,” he underlined.