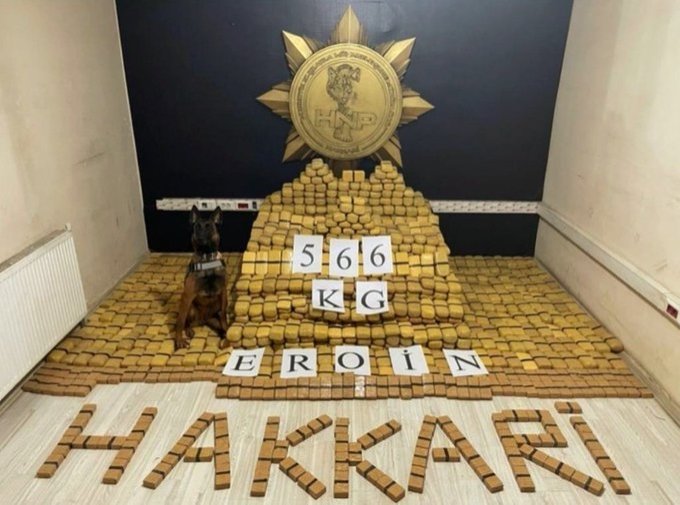 Interior Minister Süleyman Soylu announced on Thursday that police in the southeastern Turkish province of Hakkari nabbed a record haul of 566 kilos (1248 lbs) of heroin in an operation. The minister, congratulating police officers who took part in the operation in a social media post, said the heroin was seized in the province’s Yüksekova district.

Hakkari is one of the provinces in the country's southeast where security forces have launched counter-narcotics operations in the past to crack down on drug trafficking and production by the terrorist group PKK. The Interior Ministry says the terrorist group, whose campaign of terrorism in the region fizzled out thanks to a barrage of operations in recent years, profit from drugs it produces and smuggles.

Turkey is located on so-called “Balkan Route” of drug smugglers operating between Asia and Europe. Although it has boosted its success in the struggle against drugs, the country still faces a flow of drugs both as a transit and a destination country for opium derivatives, particularly heroin, which is produced in Asia and transferred to Europe, according to a report by Counter-Narcotics Department of Turkish National Police.

Last year, counter-narcotics police conducted 140,000 operations and seized 20 tons of marijuana, 11 tons of heroin and 800 kilograms of cocaine. Customs officers at the borders and ports of the country, seized 9.7 tons of drugs last year. In the country's southeast, millions of cannabis plants were seized and destroyed.