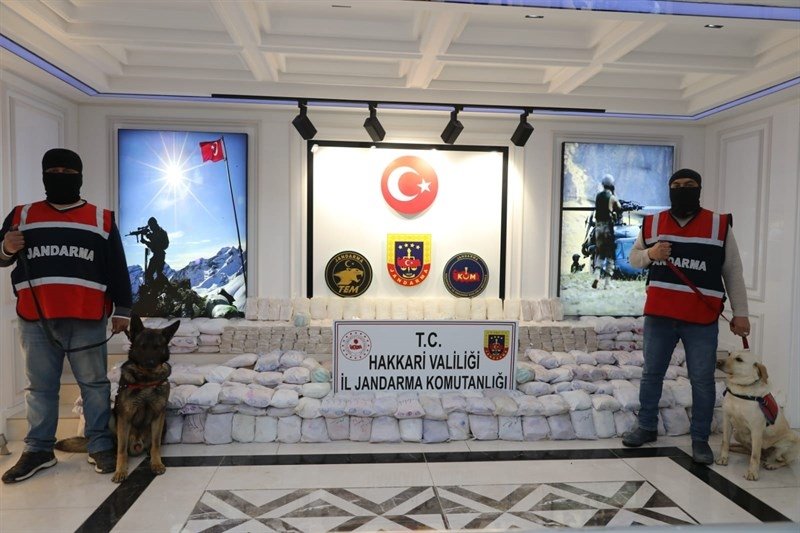 Through their operations, Turkish security forces have put a serious dent in the PKK terror group's potential profits made in the illegal drug trade in the eastern Hakkari province, officials said Friday.

A total of 1.3 tons of heroin, 10 kilograms (22 pounds) of cocaine, and 3.5 tons of acid anhydride were seized this year, said Governor and Deputy Mayor of Hakkari Idris Akbıyık.

Approximately half a ton of heroin and methamphetamine were also seized in a gendarmerie operation near the villages of Dilektaşı and Akpınar in Yüksekova, he said.

"While our country is being cleansed of terrorism, drug networks have been dealt a great blow and the financing of terrorism is being cut off, especially last year and this year," Akbıyık added.

He underlined that in 2020, approximately 2.1 tons of heroin, 5.5 tons of acid anhydride and half a ton of methamphetamine were seized in Hakkari, setting a local record.

Turkish authorities have been confiscating narcotics shipments owned or operated by the terrorist PKK since the 1980s, with the country seizing over 40 tons of marijuana in 2019 alone.

Turkey's ongoing crackdown on drugs has helped it fight narco-terrorism or profits from the illegal drug trade funding terror groups such as the PKK.

In its more than 40-year terror campaign against Turkey, the PKK – listed as a terrorist organization by Turkey, the U.S. and the EU – has been responsible for the deaths of nearly 40,000 people, including women, children and infants.