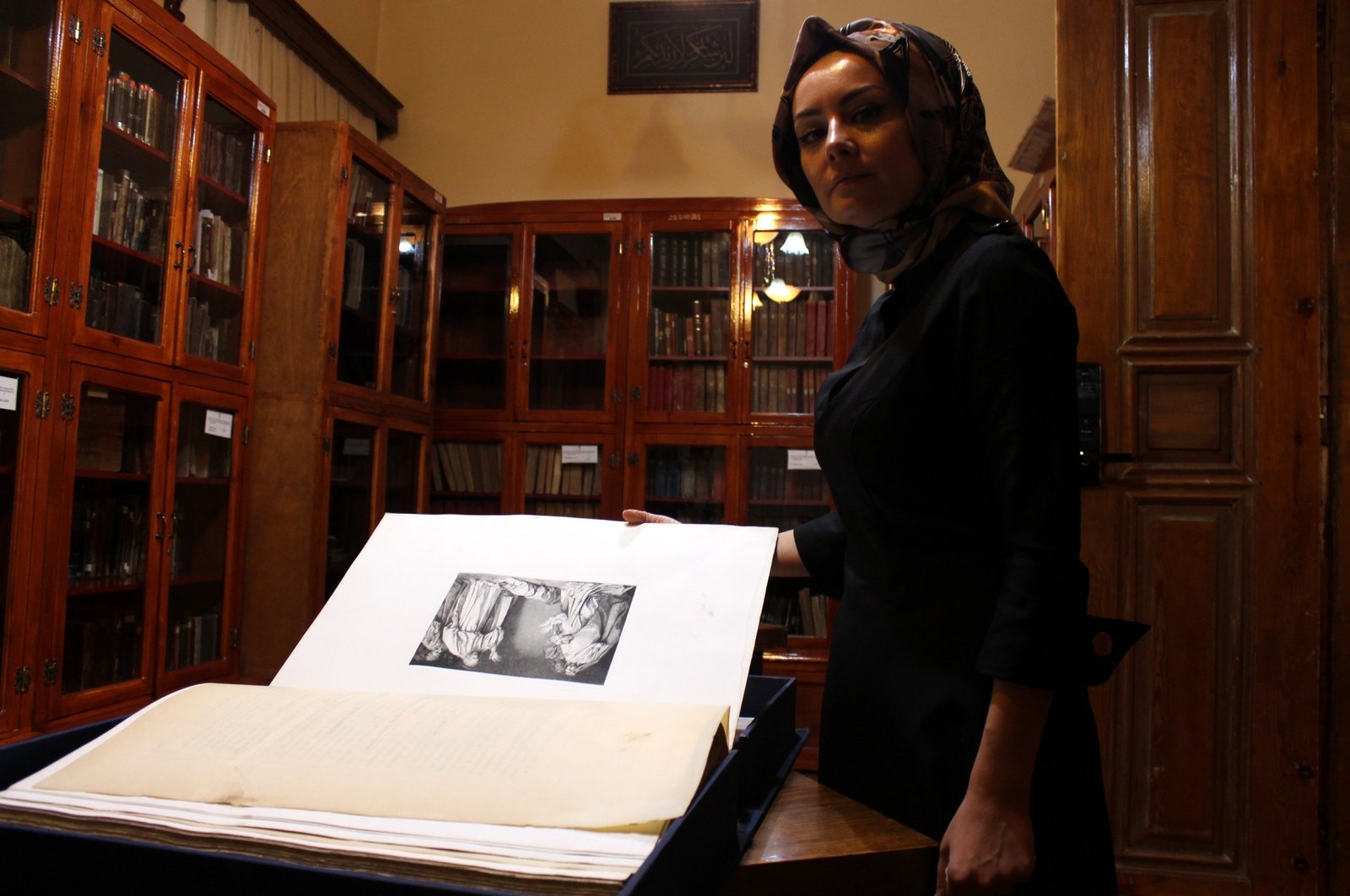 The Holy Gospels, translated from the works of French bishop and theologian Jacques-Benigne Bossuet, as seen in the Ziya Bey Library of Manuscripts, Sivas, Turkey, Nov. 10, 2021. (IHA Photo)
by DAILY SABAH WITH IHA Nov 10, 2021 12:34 pm

A treat for history enthusiasts, a French translation of the Holy Gospels by the renowned bishop and theologian Jacques-Benigne Bossuet, only published in 50 copies, becomes the centerpiece of Ziya Bey Library of Manuscripts in eastern Turkey's Sivas

A holy Bible that was printed in limited numbers in France in the 19th century has become one of the most attractive showcases at the Ziya Bey Library of Manuscripts in eastern Turkey's Sivas thanks to its unique and historical value.

The Bible, only 50 of which were published in Paris in 1873, stands as one of the most remarkable books in the library. In its own right, the Ziya Bey Library is one of the rarest in the world with a superb cultural and historical richness thanks to the thousands of priceless manuscripts on its shelves that welcome researchers from all over the world.

Only a few of the 50 copies, with the one in the Ziya Bey Library having become known as the Evangiles Bible, are believed to have survived through the present day. The manuscript, published by the Librairie Hachette, is a translation of the Holy Gospels accumulated from the works of French bishop and theologian Jacques-Benigne Bossuet by M. H. Wallon.

Dahiye Karagülle, who is the acting director of the Sivas Ziya Bey Library of Manuscripts, stated that the Evangiles Bible was one of the most striking books in their library.

"The Evangiles Bible is a Bible printed in Paris in 1873, its distinctive feature is the engravings inside. Evangiles means the Holy Gospels, it defends the belief in the Book. It is a popular sect in Christianity with recent events. The Evangiles Bible is a special edition in which the four canonical gospels are narrated with unique three dimensional engravings," Karagülle told Ihlas News Agency (IHA).

"Although it is not certain, there is an opinion that there are only 50 of these French Bibles in the world. It is said that this Bible was located here as a result of the sectarian struggles of Protestants and Catholics in Sivas during this period. It was brought here by Yusuf Ziya Başara, the namesake of our library, with his own efforts. Then it took its place in our library, undergoing various renovations.

"Currently, it still stands in our library and is under protection. Since our library also serves our visitors as a museum, there is no harm in allowing our guests to visit and see it under our supervision, and we help them (on this matter)," she explained.

Karagülle stated that the library has visitors from Turkey and abroad and said: "We divide our visitors into two categories. Generally, those who come to visit from Turkey and our hometown Sivas do not understand the language, so they only look at the images and of course admire them.

"Of course, the perspectives of our guests coming from abroad are very different. They return (to their countries) with great admiration as they can understand and decipher the language in it, and on their return, they request digital copies of it again. There is a lot of demand among our foreign tourists"

"The foreigners among our guests, their style of commentary on the engravings is very different as when you look at the engravings there are (depictions of) people from the Middle Eastern geography," Karagülle added.

"The foreign guests among our guests, the way they comment on the pictures in the Bible is different because when you look at the pictures, it is seen that there are people from the geography of the Middle East. They say that it invokes the impression of a Christianity that is closer to Judaism, more under the influence of Eastern culture and still not under the influence of Western culture.

"Of course, when you see these pictures, every person's interpretation is different," she said.