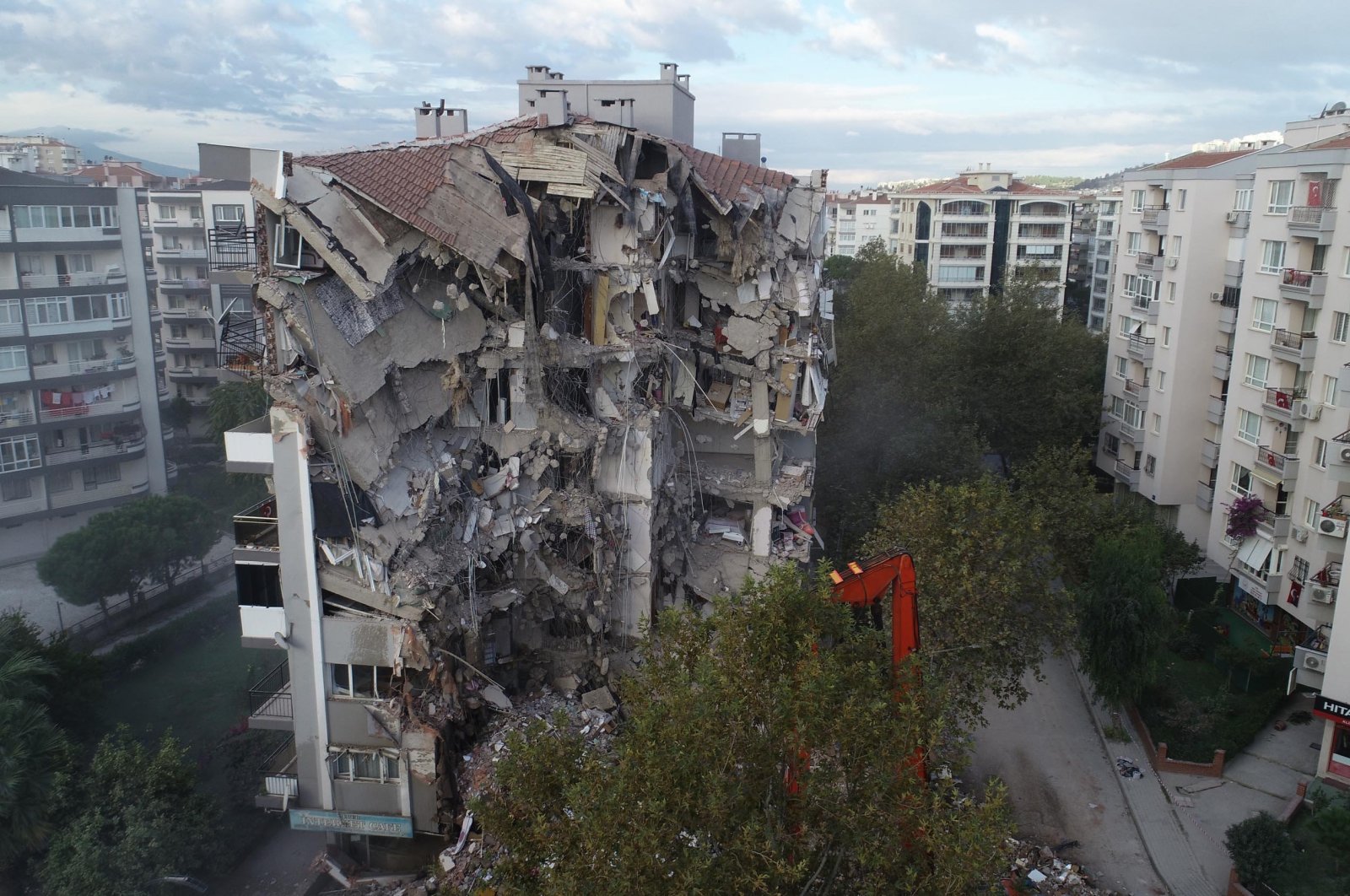 The reconstruction and 'transformation' of areas devastated by a 6.6 magnitude earthquake in Izmir province are scheduled to begin next week, Minister of Environment and Urban Planning Murat Kurum announced Friday

Izmir, Turkey’s third-largest city, which sits on the Aegean coast, was rocked by a 6.6 magnitude earthquake on Oct. 30. Less than a month after the disaster, which killed 116 people, the government will launch a “transformation” project in seven affected areas, Minister of Environment and Urban Planning Murat Kurum announced Friday. Addressing a meeting of Parliament where his ministry’s budget was discussed, Kurum said damage assessment work was concluded in 145,677 buildings in Izmir, and they discovered thousands of buildings and housing units heavily damaged or demolished in the earthquake. Kurum said that "6,465 buildings sustained slight damage and another 676 had medium damage. So far, personal possessions of residents were evacuated from 136 buildings and 73 buildings were demolished."

The earthquake, which was felt as far as mainland Greece, laid bare unsafe construction as the primary factor in the devastation. Most buildings demolished in the earthquake were those in Bayraklı, some 58 kilometers (36 miles) north of Seferihisar, the district at the epicenter. Studies by experts showed collapsed buildings were either built on unstable ground, had low-quality construction materials or were later modified in a way that endangered their endurance to disasters. Contractors and engineers of buildings were detained following the earthquake.

Turkey has been pursuing an “urban transformation” project nationwide as a preventive measure against disasters and to renew urban landscapes. The project involves the demolition of old, unsafe buildings and their replacement with new, sturdier ones. Kurum said in Parliament that 70% of the buildings that collapsed in Izmir were those built before 1990 and the rest were built between 1990 and 2000, one year after a deadly earthquake in northwestern Turkey killed 17,800 people. “We haven’t seen any damage to buildings constructed after 2000. This shows how right the measures against earthquakes that were taken after the 1999 earthquake were, including the inspection of construction work,” Kurum stated.

The minister noted that they launched the “biggest urban transformation campaign” in Izmir’s history and readied projects for 5,000 residences which will be initially built for the residents of damaged and collapsed buildings. “In seven areas where collapsed buildings are located, the transformation will start this month. Additionally, we will start building new residences in a reserved space of 1.3 million square meters for our brothers and sisters in Izmir. These new residences will have five floors at most and comply with local urban texture. We aim to deliver them to their owners within one year,” he said.

Earlier this month, President Recep Tayyip Erdoğan announced plans to build at least 1.5 million housing units in Izmir over the next five years.

Kurum said that more than 26,000 houses have been built in Elazığ and Malatya, two eastern provinces hit by a deadly earthquake in January, and construction was underway for more than 19,000 residences in Elazığ. He said they planned to deliver about 8,000 residences to their owners by the end of 2020.

“Seventy-one percent of our population lives in areas at risk for earthquakes. Unfortunately, 80,000 citizens died in earthquakes in the past 100 years. Some 1.5 million residential buildings are in need of immediate transformation,” the minister stressed. “Urban transformation was launched in Istanbul in 2012, and since then, we have been working in 269 risky locations that house 568,000 homes or business units in 59 provinces,” he added.