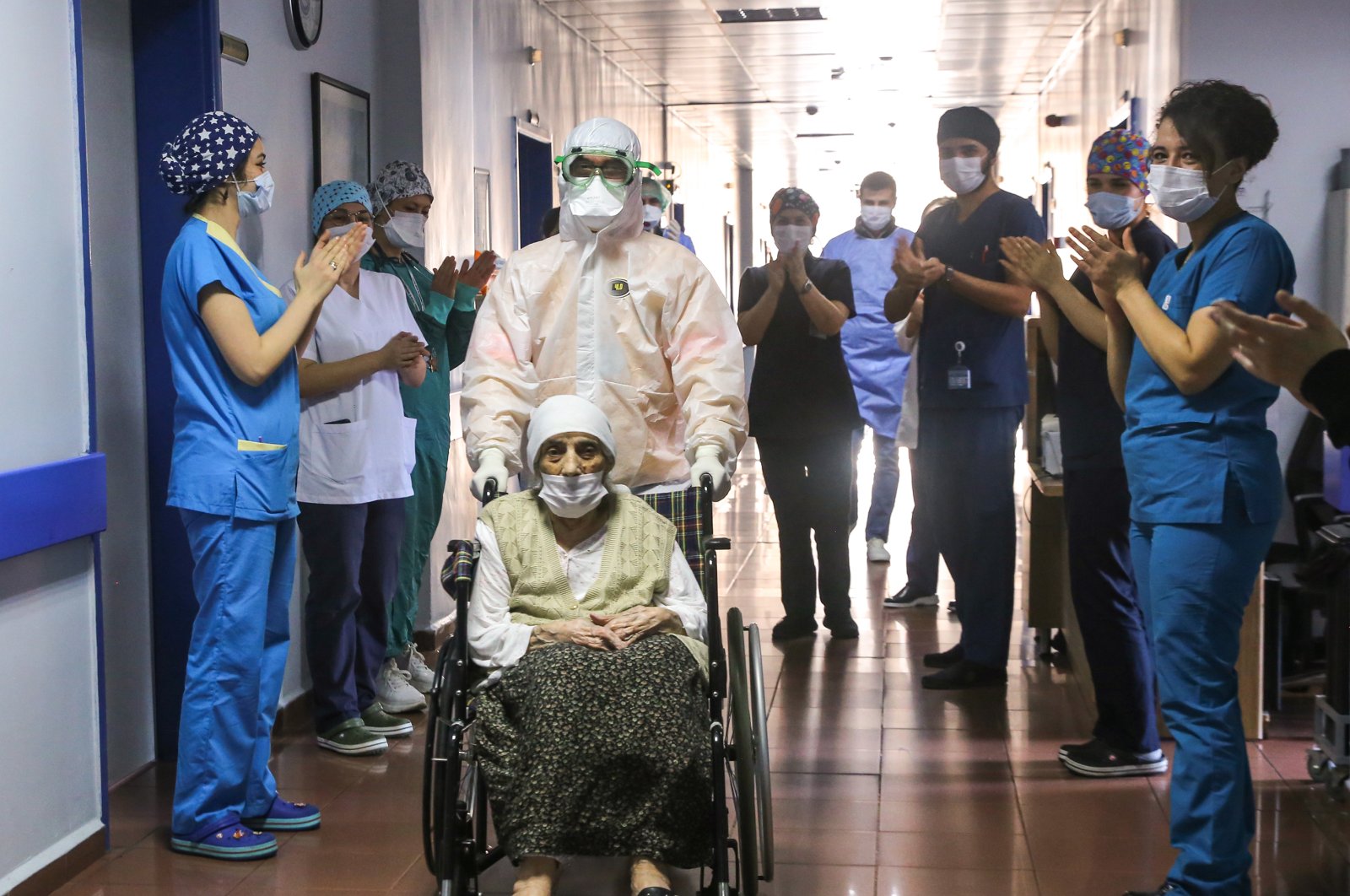 The number of those recovered from COVID-19 reached 3,957 on Monday, fostering hope for the country embattled by the pandemic. Recovered patients call on the public to stay home, comply with measures and stay healthy to fight the virus

The total number of those infected with the coronavirus in Turkey has reached 61,049, with 4,093 more people testing positive in 24 hours, Health Minister Fahrettin Koca announced Monday, although the recovery data has offered some signs of hope. World Health Organization (WHO) spokeswoman Margaret Harris announced Tuesday that though the number of new cases was easing in some parts of Europe, the outbreaks were still growing in Britain and in Turkey.

Recovered patients urge others to heed the recommendations of health authorities and comply with measures, from social distancing to the curfew for the elderly and the youth, as self-isolation and avoiding contact remain crucial to prevent the virus from spreading.

The death toll in the country hit 1,296 on Monday, with 98 having passed away as a result of the illness in the last 24 hours, while the total number of discharges increased to 3,957. A total of 511 patients recovered in a single day, according to statements made by Koca on his Twitter account. Those discharged within the past 24 hours included a 92-year-old patient who has recovered from the deadly disease. Bahriye Kaya of Çalköy in the Yenice district of northwestern Çanakkale province was admitted to Çan State Hospital on March 31. The hospital has been specially assigned the duty of treating locals infected by the virus. Kaya, who was suffering from respiratory failure and was taken to intensive care, had tested positive for COVID-19. The elderly woman received treatment in the intensive care unit for nine days, followed by five days of standard patient observation and care. Kaya left the hospital with rounds of applause by health care workers and was taken home by ambulance.

Önder and Çiğdem Ersan, a doctor couple, were among those who recovered. The couple, working in the capital Ankara, returned to their jobs. “As long as you follow the instructions of the Health Ministry, stay home, sleep and rest well, you can be protected,” Önder Ersan told Demirören News Agency (DHA) on Tuesday. Ersan, who works at Yıldırım Beyazıt Training and Research Hospital, was admitted to the hospital on March 24 with a sore throat and fatigue. After he tested positive for COVID-19, doctors ran a test on his wife Çiğdem, who works as a doctor at Ankara Esenboğa Airport. She tested positive as well. Önder Ersan was discharged after one week of treatment while his wife stayed in the hospital for two days. They were fully recovered after a quarantine process at home. Önder Ersan said he was likely infected by another doctor at the hospital who had tested positive earlier. “My first five days at the hospital were really difficult but I overcame it. I am lucky because I did not have any underlying illnesses. I don’t smoke, am careful about my diet and regularly exercise. Thus, I was spared from intensive care,” he said.

“I recommend people to keep their morale up, watch what they eat, abstain from smoking and adhere to social distancing and stay at home,” he advised. “I was scared at first because there weren’t as many cases then as there are now. But when I started hearing about recovering patients, I started thinking positively. Being optimistic helps in your treatment."

Çiğdem Ersan had no symptoms when she was infected. She overcame the disease without any special treatment. “I owe it to my healthy lifestyle,” Çiğdem Ersan, a teetotaler, said. “I think this strengthened my immunity. People should not be afraid of the coronavirus. As experts say, many people will be infected but they will recover. We have a good health care system in Turkey."

Health care workers are an at-risk group for the coronavirus as they are on the front lines in the fight against the pandemic. Hakan Terekeci and Cem Özuğuz, two doctors from a privately-run hospital in Istanbul’s Kadıköy district, were among those who were infected and recovered. Terekeci spent 18 days at the hospital. He applied for a test when one of his patients tested positive. “Tests were not giving as fast of results as they are now when I was infected. I wanted to speed up the treatment process and had a lung tomography,” Terekeci, who did not have any COVID-19 symptoms, said. “I didn’t have a fever or a cough or any other symptom. Probably, it was because the disease was still in the incubation period in my body. This early diagnosis helped my treatment to succeed,” he told DHA. He says he was careful about self-isolation, and tests on his wife and son came back negative.

He warned that not having known symptoms does not mean you are not infected. “I had back pain before I had the tomography, and I thought it was unrelated but the virus was detected at the spot where the pain was felt. I heard that there are other uncommon symptoms like a rash on the feet. Symptoms may vary from person to person but what saves your life is your immune system,” he said.

Özuğuz's symptoms emerged on March 22, and when he tested positive, he thought he would spend a few days at the hospital. “It took about 20 days, with the first six days having a high fever. It spread all around my body on the fifth day,” he said, recounting his COVID-19 experience. Özuğuz warned the public to stay home. “They still have an opportunity to not be infected. You may see healthy people out on the street but they can be carriers as well. They can infect you. You have to empathize with patients and heed the warnings,” he said.

“I lost 12 kilos in 20 days and it was a horrible time of my life. It is up to you not to go through the same ordeal,” Özuğuz added.

Havahan Karadeniz, a 107-year-old woman in Istanbul, is among those who have recovered. The centenarian was discharged from Istanbul Training and Research Hospital on Tuesday, one week after she was admitted. Karadeniz, in the company of her great-grandson Melih Çırağ, left the hospital amid the applause of the staff. The hospital’s chief physician, professor Özgür Yiğit, told Anadolu Agency (AA) that they had many patients like Karadeniz who recovered. “She had a fever, cough and fatigue when she was admitted and now she will stay home in self-isolation for the rest of her treatment,” he said. Yiğit said that although they do not have definitive medication for treatment, they have effective drugs. “It is possible to recover if you have the right diagnosis and proper treatment,” he said.

Karadeniz said she was pleased with the care she received at the hospital. “This is a good hospital with good staff. May God bless them. I will tell everyone how they treated me,” she said.

Turkey has imposed restrictions on daily life in an effort to slow the spread of COVID-19. Though an early response to the crisis has stemmed the number of those infected, the country has had mixed success in limiting public mobility, especially on weekends, given the rising temperatures.

With this in mind, a weekend curfew declared Friday in over 31 mainly urban provinces came as no surprise for many, despite having been announced only two hours before implementation. The weekend curfews will also remain in place as long as deemed necessary for the coming weeks, President Recep Tayyip Erdoğan announced Monday. Speaking after a Cabinet meeting, Erdoğan said: “Our goal is to protect citizens, who might otherwise give in to the temptation provided by the good weather, from the dangers of coronavirus. I would thus like to announce ahead of time that we will impose a curfew starting midnight April 17 and ending Sunday midnight." Commenting on the scenes of citizens clamoring to get last-minute supplies in stores and bakeries across the country following last weekend's surprise announcement, Erdoğan said all necessary precautions would be taken to avoid similar scenes.

Regarding the current status of Turkey’s fight against the coronavirus, the president said Turkey was doing well compared to other nations.