Republic Day celebrated with fervor across the country 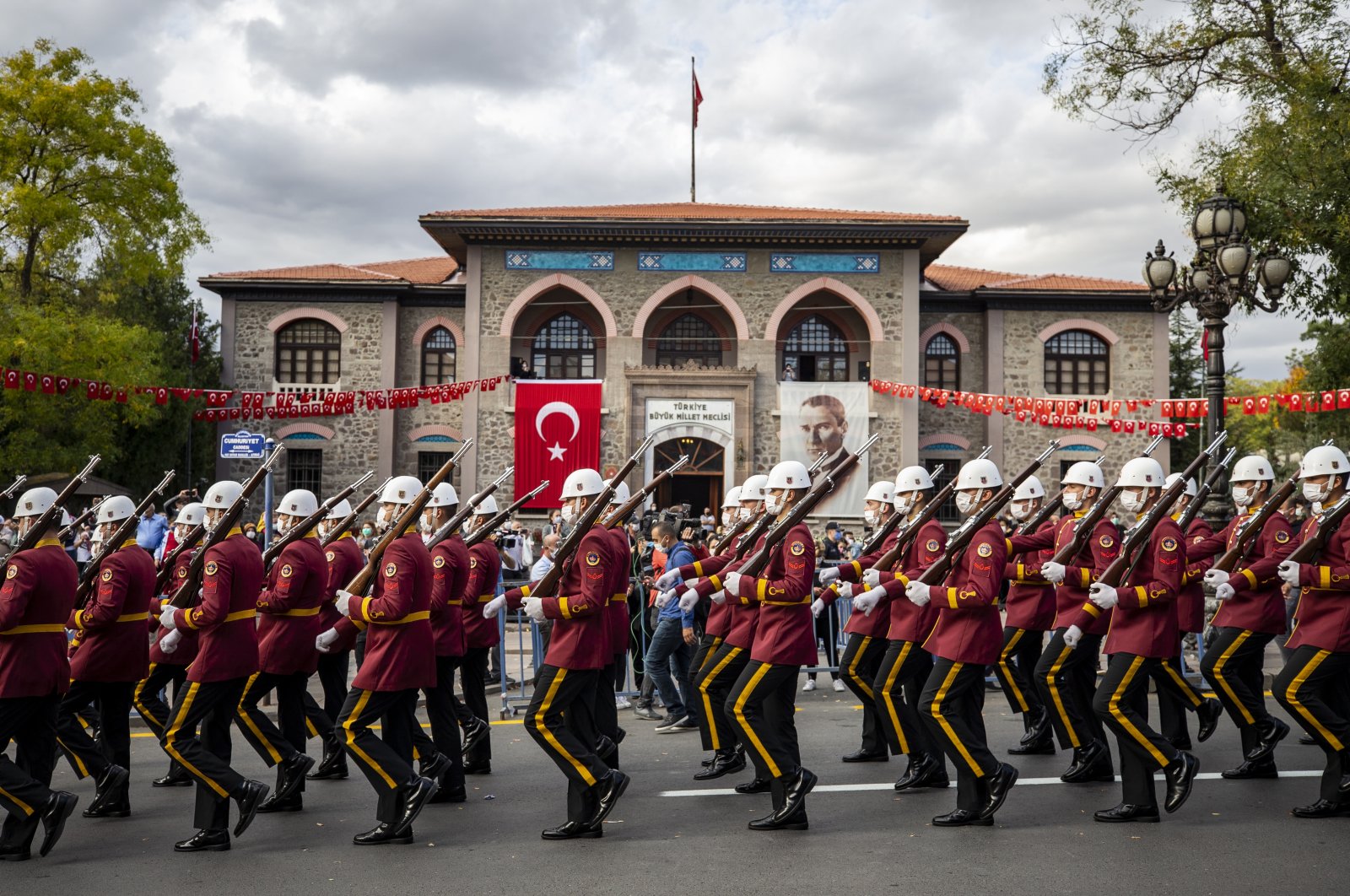 The nation marked the 97th anniversary of its transition to a republic on Thursday with the annual commemorations of the patriotic spirit that paved the way for a new country, amid extra measures against the pandemic

This year’s celebration of Republic Day was unprecedented, but the fervor was still there. Across the country, streets were adorned with Turkish flags and ceremonies were held in every city and town on Thursday. Donning masks and respecting social distancing under the shadow of the COVID-19 pandemic, the Turkish public marked the 97th anniversary of the country's declaration of sovereignty following its War of Independence.

Instead of crowded events, celebrations were limited to small-scale wreath-laying ceremonies and parades in memory of the republic’s founders, including Mustafa Kemal Atatürk, the country’s first president and commander during the War of Independence.

President Recep Tayyip Erdoğan, accompanied by government ministers and opposition leaders, paid a visit to Anıtkabir, Atatürk's mausoleum, in the capital Ankara where he laid a wreath on the founder's grave. Speaking before signing a guest book at the mausoleum, Erdoğan said in an address to Atatürk, “We commemorate your excellency, all heroes of our War of Independence and honorable martyrs.” The president went on to say that “internal and external attacks” to stop Turkey’s progress only strengthened their resolve for struggle and determination. “We will continue walking toward our shared future in unity, togetherness and fraternity by drawing courage from our glorious past full of victories,” he continued. Erdoğan wrote in the book that his administration is working hard for the progress of the republic “you entrusted to us,” along with: “Turkey today is achieving accomplishments in every field from democracy to freedoms, from defense to economy, from health to foreign policy.”

Erdoğan later hosted guests at the Presidential Complex for celebrations, from ministers to generals and ambassadors.

All across the country, local administrations organized concerts, light shows, parades and other events to mark the day.

The republic, which replaced the collapsed Ottoman Empire, was declared a few months after an international treaty recognized the independence of the new state and the declaration of Ankara as its capital was made. Atatürk, a veteran Ottoman officer who launched the struggle for independence when he secretly traveled to the northern province of Samsun in 1919, was the de facto leader of the new state. In the book "Nutuk" ("The Speech"), which compiled Atatürk’s speeches between 1919 and 1923, the leader recounts the declaration of the republic as something that happened over the course of a dinner with leading figures of the War of Independence. “During the dinner (on Oct. 28, 1923), I told them we would declare the republic tomorrow. All friends agreed with me and we took a break from the dinner to discuss what to do next. I never felt the need to discuss the plan to declare the republic because I never doubted that they thought differently than me,” he was quoted as saying. Atatürk, along with Ismet Inönü, who succeeded Atatürk as president, drafted a bill changing the 1921 constitution in which an amendment changed the State of Turkey to the Republic of Turkey and it was approved by Parliament the next day. Atatürk was officially declared the first president at the same session of Parliament.

Building upon the legacy of a semi-parliamentarian system during the last years of the Ottoman Empire, the new republic introduced a wider democracy in which Atatürk is hailed as the great statesman credited with rebuilding a devastated country with new ideals.

Under Erdoğan, Turkey declared a new set of goals under the motto “Vision 2023” in reference to the centenary of the republic. Economically, the government plans to increase national income and exports, while other goals include a national health care system that covers every citizen, judiciary reforms, minimizing dependence on imports in defense and an active and efficient foreign policy.

Republic Day holiday wishes poured in from countries with whom Turkey enjoys close relations. But one message stood out among them. The French delegation to NATO shared Republic Day greetings on Twitter at a time of tense relations between the two countries. French President Emmanuel Macron’s remarks about Islam in which he characterized the religion as “problematic” and policies that critics describe as a “witch hunt” against the Muslim community in France sparked outrage in Turkey. Turkish and French officials exchanged barbs in recent days over the issue, but the French delegation’s tweet had a more conciliatory tone. “We congratulate our Turkish ally on Republic Day. Turkey and France have been allies for centuries and have a long-standing relationship rooted in the past. Our republics were founded on common values which are also NATO’s values. These values should remain as the basis of our commitment,” the tweet in Turkish said. Accompanying the message were Turkish and French flags and portraits of Ottoman Sultan Suleiman or Suleiman the Magnificent and France’s Francis I. The 16th century rulers of both countries had established the first concrete diplomatic relations and an alliance against their common enemy, the Holy Roman Empire.

Turkish delegation at NATO replied with a thank-you note on Twitter, with a meaningful response calling for “common values to be progressed based on respect to identity and sensitivities of our nation,” in reference to Islamophobic mindset in France that drew the ire of Muslim-majority Turkey.