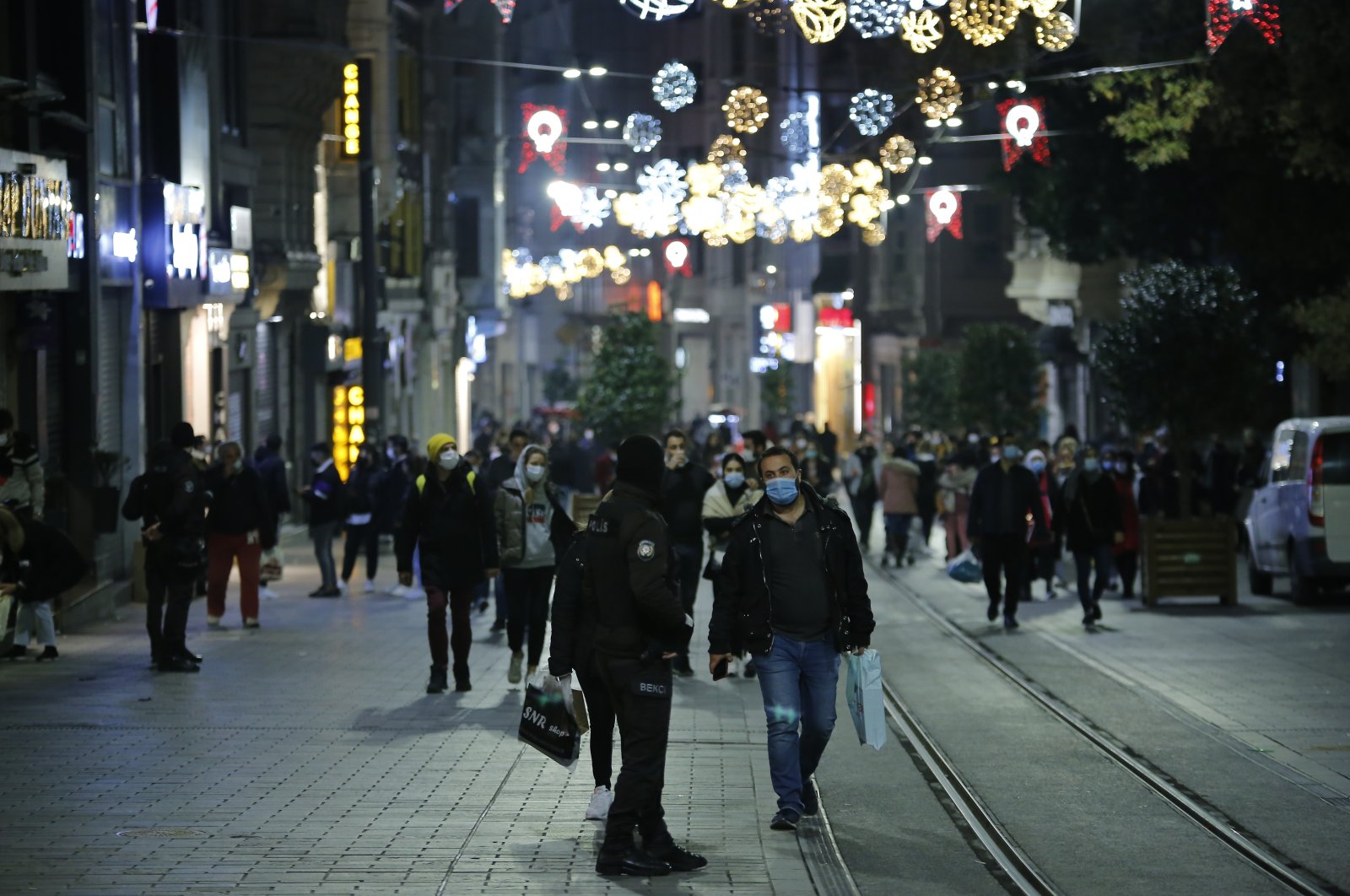 A member of the government's science board on coronavirus restrictions says a four-day curfew should be considered from Dec. 31 to curb the surge

Turkey’s uphill battle against the coronavirus pandemic took another turn a few days ago as the nation added weekday curfews and expanded weekend restrictions into lockdowns. Professor Mustafa Necmi Ilhan, a member of the Health Ministry Social Sciences Board that recommends COVID-19 measures for the government, says a four-day curfew should be discussed to decrease mobility during the upcoming New Year.

New Year celebrations are large-scale events, especially in big cities where people en masse take to the streets for a countdown to the new year. Ilhan says a curfew should be imposed from Dec. 31 through the following weekend. “We can restrict people from convening on the streets, we can prevent people from meeting at homes for New Year parties. The same curfew was applied in Ramadan Bayram,” he said, referring to the Muslim holiday that was observed in May when coronavirus cases were climbing.

After strict restrictions in the spring, Turkey eased into a normalization process early in the summer. The nation's number of patients steadily decreased but as autumn began, the country started experiencing a new surge. The total number of patients now exceeds 506,000 while fatalities are near 14,000. Recoveries stand at 409,320.

Ilhan notes that the greatest measure against the pandemic is the one citizens take themselves. “People have to take responsibility. You see people coming together on the weekends, be it outside or at homes. Then, we see a rise in the number of patients in the ensuing days. Contact tracing work shows infections mostly stem from people coming together for weekends at homes. People should confine themselves to home and spend time only with family,” he warned. “People should not host parties at home or attend parties. No one should admit guests. If they need to come together at all, they should be in well-ventilated places, wear masks and be careful about social distancing,” he told Demirören News Agency (DHA) on Wednesday.

Starting on Tuesday, the government imposed a 9 p.m. - 5 a.m. curfew on weekdays. An all-out weekend lockdown will also be in place between Friday night and Monday morning for the first time in months.

Apart from nationwide curfews, the government authorized local administrations to take their own, specific measures against the outbreak based on trends. To that extent, the pandemic board of Istanbul district Beyoğlu decided to limit access to Istiklal, the iconic avenue at the heart of the city that hosts thousands every day. The gateway to Taksim Square is lined with shops and is one of the top destinations for tourists. A new decision by the board announced on Tuesday will limit access to the strip to only 7,000 people at one time. The restriction will start at 10 a.m. on Thursday. Beyoğlu district governor Mustafa Demirelli announced on Twitter that access is restricted to curb infection risk. He said the section of the street between Taksim Square and Tünel Square may be shut down temporarily if the number of people exceeds 7,000. He also said pedestrians would only be allowed to walk on the right side of the avenue which is divided by a long nostalgic tram road. “We expect business owners on the avenue, our foreign guests and citizens to understand and comply with restrictions,” Demirelli said. Authorities said physical obstacles would be placed at the entrances to the avenue to limit access. The plan is to have only one person per 3 square meters (32 square feet) on the 21,000-square-meter street. Police officers already patrol the avenue to encourage adherence to social-distancing and mask-wearing rules and to issue warnings or fines to those failing to comply with the rules.

In the meantime, Turkey is looking forward to mass vaccination as the ultimate solution for the pandemic. Health Minister Fahrettin Koca announced on Tuesday that a Chinese vaccine would be delivered first to health care workers after Dec. 11 and to millions more the following months. Hasan Murat Gündüz, a member of the ministry’s Coronavirus Scientific Advisory Board, says they predict the majority of society will gain immunity to the virus with vaccination. “We will head toward a healthy summer,” he told Ihlas News Agency (IHA) on Wednesday.

Mass public vaccinations are scheduled after health care workers and Gündüz says this might start in January. “We expect a rise in immunity in a significant portion of the public,” he said. Professor Mehmet Ceyhan, who heads the Children’s Infectious Diseases Department at Hacettepe University Faculty of Medicine in the capital Ankara, says up to 80% of the population should be vaccinated for immunity of 60% of the population. “This means a vaccination of 55 million to 60 million people. Each requires two doses so overall, we will need up to 120 million vaccines,” he told DHA on Wednesday.

Turkey made an agreement with China to purchase 50 million vaccine doses, authorities announced earlier. The Chinese vaccine will be free for everyone, while those from other companies and countries might be sold at pharmacies. Koca announced earlier that Turkey was in talks with Germany to purchase some 25 million doses.