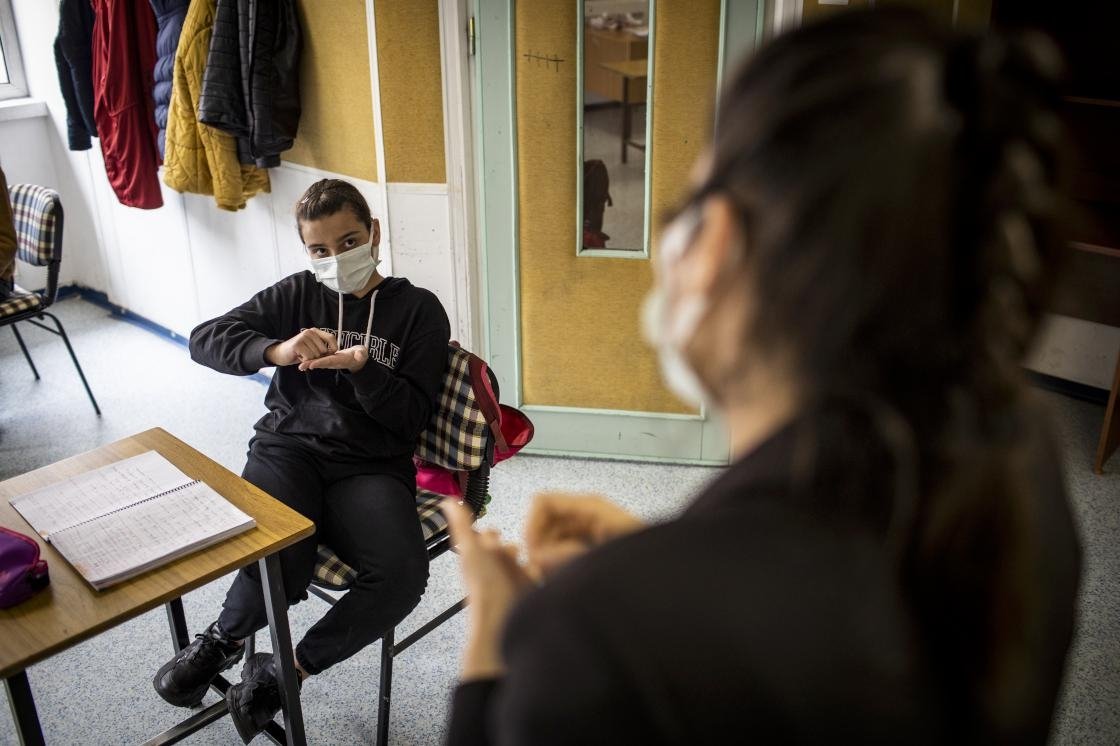 A hearing-impaired student communicates with her teacher at a classroom, in the capital Ankara, Turkey, March 23, 2021. (AA PHOTO)
by Daily Sabah with AA Jun 07, 2021 2:36 pm
RECOMMENDED

June 7 is Turkish Sign Language Day, an occasion to celebrate the language, which is now more prevalent than in the past in the country that is home to 4 million people with hearing impairment according to unofficial figures. Still, it is not without challenges.

Worrying about not being understood is the biggest problem among people with hearing loss, Mesut Yazıcı, a sign language instructor, said. Yazıcı said that unlike other disabilities, it is not possible for people with full or partial hearing loss to be initially noticed, and as a result, their visibility in society is low.

He said the situation had gained his attention during his years at university when he started taking photos. "I took a photo of a hearing-impaired person for a competition I wanted to participate in. Hearing impairment is not an obvious disability. I got an award for that photo. Thanks to this, I developed a relationship with hearing-impaired people," he said.

"At the same time, I started going to one of the associations of the hearing impaired. While sign language was not yet available in Turkey, we used to go to the association and learn sign language. The Education Ministry did not have a sign language curriculum or certificate programs. There was no trace of sign language anywhere. No one has looked at it as a profession until now," he said.

2020 was declared as the Year of Accessibility by the Turkish Presidency and the government stepped up efforts toward that goal, drafting new policies and regulations. The Ministry of Family and Social Services spearheaded the efforts, including new rules for accessibility everywhere from shopping malls, airports and public buildings to gyms and bus terminals. The ministry also issued a new set of guidelines for inspecting compliance with accessibility rules.

Pointing out that sign language education is a very new field, Yazıcı underlined that it was needed in many areas. He said many experts worked as interpreters at police stations, courthouses, land registries and notaries public and noted that many people could also work as instructors at public education centers or universities that have incorporated sign language as an elective course.

He added that some of his students taught the Quran in sign language to disabled people or accompanied the hearing impaired in city hospitals. Other ad hoc efforts, such as companies educating staff on sign language, are relatively new.

The origins of Turkish sign language are not known but experts say it is likely a successor to the language used in Ottoman times, especially during the reign of Abdülhamid II whose rule was marked with the opening of the first school exclusively catering to hearing-impaired students.

The language was banned for years on the presumption that it hindered efforts to help the hearing impaired to learn speaking and lip-reading before the ban was lifted in 2005.