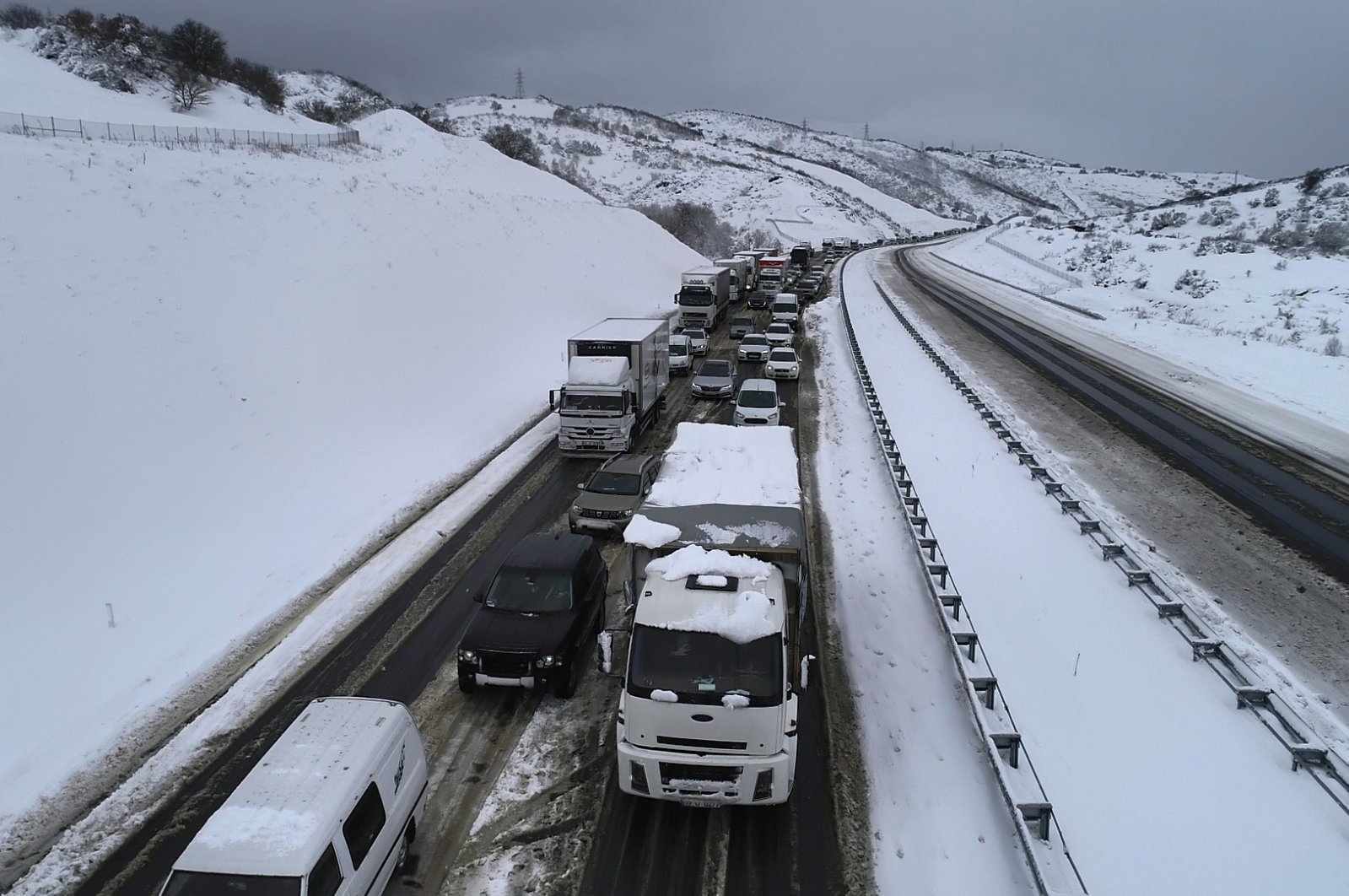 Turkey has experienced heavy snowfall this week, which is particularly bearing down in western regions. The precipitation on Monday and Tuesday led to the closures of roads connecting major cities in the west. In the central province of Konya, five people were killed and 38 others were injured when a bus crashed into a parked car on an icy road.

A road connecting the northwestern province of Bursa to Istanbul was hit hard by the blizzard on Tuesday. It was briefly closed to most traffic, with only vehicles with tire chains and snow tires allowed to pass. Security forces diverted trucks and other heavy vehicles to a highway. Bursa, located south of Istanbul, has been battered with snowfall since Saturday. Another road connecting the province to Balıkesir was closed early Wednesday due to heavy snowfall. A 25-kilometer (15.53-mile) line of vehicles was visible on a section of road near Balıkesir’s Susurluk district. Police set up checkpoints on the road, turning away vehicles. Balıkesir is experiencing its heaviest snowfall of the past two decades, authorities say. Vehicles drifting on icy roads led to a slowdown in traffic before authorities moved in to reopen the road. Susurluk district governorate delivered food to motorists stranded on the road for hours, while Balıkesir Governorate warned drivers to stay off the roads in a written statement.

The Balıkesir-Bursa route is part of a larger road network connecting Turkey’s western provinces near the Aegean coast to Istanbul, the country’s most crowded metropolis. Ibrahim Can, a motorist stranded on the road, told Anadolu Agency (AA) that he was traveling with his family from the western province of Izmir to Istanbul and has been stranded in Susurluk since Monday night. Mert Yıldıztekin, a truck driver, said that the snowfall has not ceased since Monday night and has "almost buried" vehicles.

In Konya, Rahim E. had parked his car on the roadside to help a driver whose truck flipped over on an icy road in the Karapınar district, when a passenger bus crashed into his car. Two people in the car and three onboard the bus were killed in the crash, and 38 passengers on the bus were injured in the accident early Wednesday. In Kırıkkale, another central province neighboring the capital Ankara, a bus carrying a football team from the northern province of Ordu overturned when the driver lost control on an icy road. The driver was injured in the accident.

In Istanbul, which is experiencing its first major snowfall of the winter, authorities announced that the bad weather had toppled more than 500 trees and utility poles. The snow reached depths of 45 centimeters (near 18 inches) in parts of the city on higher ground. The snow is expected to stop late Wednesday in Istanbul. Istanbul Metropolitan Municipality (IBB) announced that on top of the toppled trees, the strong winds and heavy snowfall had caused 17 buildings' roofs to collapse. A seven-car pileup on a section of E-5 highway in the Silivri district on the city's European side caused a traffic jam. No casualties were reported.