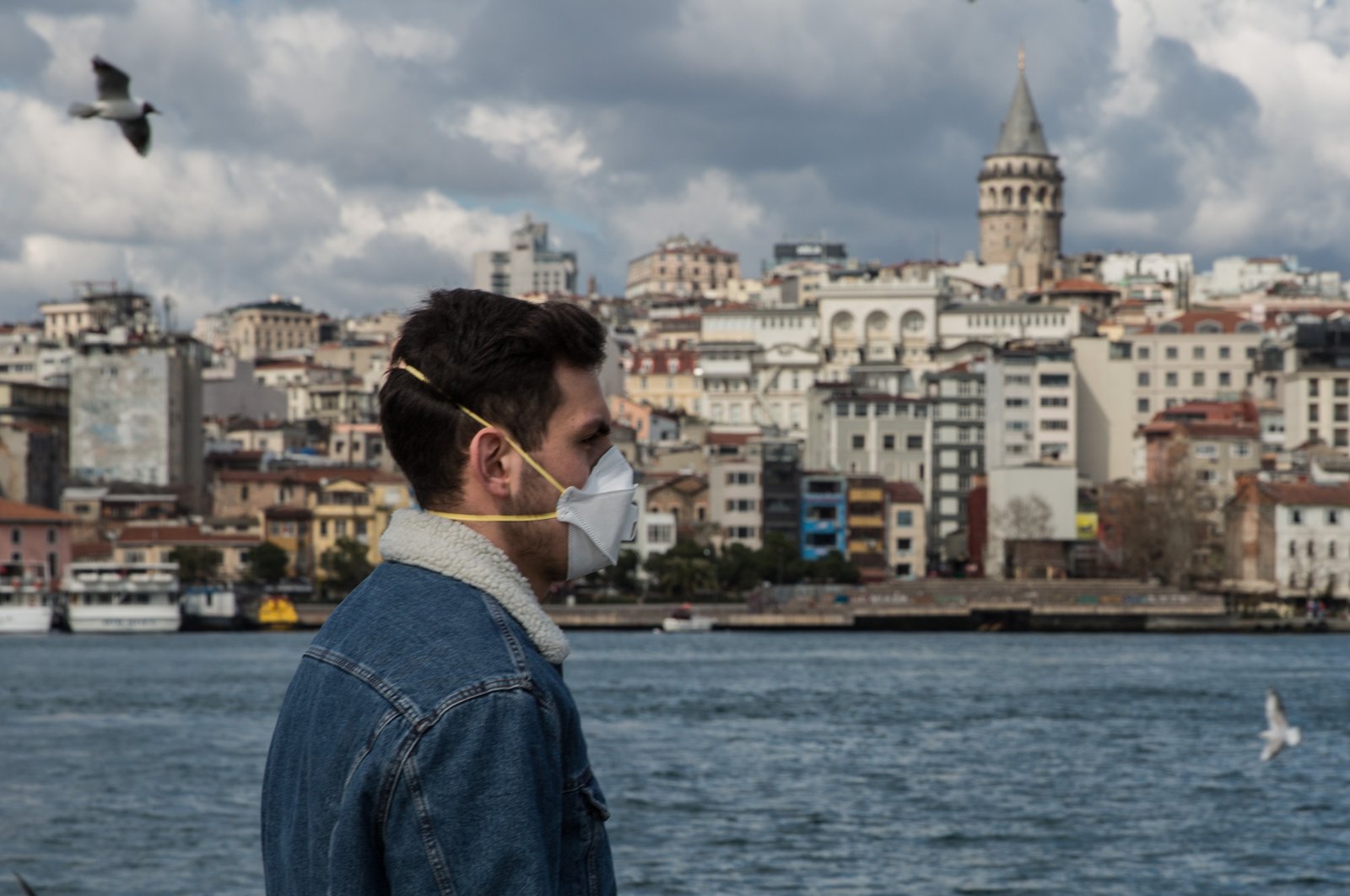 After a lengthy meeting Wednesday, Turkish President Recep Tayyip Erdoğan told the public to avoid going out if not necessary as Turkey gradually unveils new measures against the coronavirus outbreak

President Recep Tayyip Erdoğan urged the public to not leave their homes except for emergencies, in a bid to contain the coronavirus outbreak.

He was speaking after a meeting with businesspeople and top bureaucrats Wednesday for measures against the virus. Erdoğan pledged it would only take three weeks to overcome the situation if the public complies with the measures and heed advisories.

As Turkey grapples with the coronavirus pandemic, it reported new cases Tuesday as well as its first death. However, it still remains one of the safer places in Europe and Asia, compared with its neighbor Iran where hundreds have died in a few weeks.

The president has been relatively quiet amid the coronavirus scare while Health Minister Fahrettin Koca took center stage in efforts to contain the outbreak, winning public praise. Erdoğan had earlier held a cabinet meeting, but Wednesday’s meeting was the most comprehensive. It included business leaders and representatives of nongovernmental organizations (NGOs) apart from ministers and other dignitaries.

“Pandemics have a relatively lower death toll compared to other diseases thanks to preventive health services and developments in the pharmaceutical sector. Still, they have the potential to cause mass deaths without preventive measures. We need to take fast and effective measures. We don’t know how this (virus) will affect humanity. We are entering an era with likely radical changes in the global, economic, political and social order,” Erdoğan said after the meeting. He added that Turkey was in a better position compared to other countries thanks to reforms in health care and infrastructure. “Turkey has the best possible preparedness for such a situation,” he said.

The president repeated warnings issued by the Health Ministry in his speech. “Healthy people can easily recover from this illness, but those with health problems, with a weak immune system, may face deadly consequences. The best way of protection from this illness without a vaccine and definitive cure is to stop the infection. The best protective measures are the ones everyone will take personally. The (government) measures are temporary, but if we comply with them, we can decrease the time needed to spend at home to three weeks,” he added.

“I appeal to our nation not to leave their homes as much as possible until the threat is over. The more we increase social distancing, the more we decrease movement, the lower the threat will be. It is time to minimize our contact with the outer world, it is time to stay home as much as possible.” “Everyone who does not have to go out should stay at home and should not be in contact with anyone else. People who went to work should return home immediately after their work is over and should wash their hands and face without touching anyone when they come home,” he said.

Erdoğan, who already switched handshakes with a simple pat on the chest, also urged the public to stop intimately close greetings. “Handshakes, hugs, kissing hands have an important place in our culture, but we need to delay such acts for a while. Until the danger of the outbreak is over, avoiding them should suffice. We have to express our love, admiration with gestures and our words.”

The senior citizens, particularly those 65 and older have a higher risk of death from coronavirus. Erdoğan urged them to stay home like younger citizens, adding that they should also minimize contact with other family members.

“Some European countries ... ignore the elderly and disadvantaged communities. On the contrary, we hold them with high esteem. Our Science Board has advised delivering all citizens above the age of 65 with protective masks and cologne. The deliveries will first start in Istanbul and Ankara,” Erdoğan said. The president said public banks would also deliver pensions for retirees above the age of 76 to their homes.

The president also called on citizens not to visit hospitals outside emergency cases so that the staff will be relieved of extra workloads in the event of a rise in infection cases.

One of the factors that helped stem the spread of the disease in the country is due in large part to the government's preparation of a detailed plan against a possible influenza pandemic eight months before the COVID-19 spread around the globe. In April 2019, a detailed 229-page plan was published by the Health Ministry, laying out precautions against a possible pandemic. Official institutions were ordered to abide by strict hygiene rules and implement particular measures in case of an epidemic emergency or a global pandemic. The plan lists responsibilities of “national coordination boards” set up to stave off a pandemic and details everything from prevention of medical supply shortages to prevention measures on borders.

As people in Turkey take precautions against coronavirus, they need not fear any disruption in the nation's food supply, said a top Turkish official Wednesday. Turkey has no problem in the production, stock or supply chain of basic food products, said Agriculture and Forestry Minister Bekir Pakdemirli. "Stocks of the Turkish Grain Board (TMO) contain enough products to meet the needs of the feeder, grower, industrialist and consumer," he said in a written statement.

No problems are expected in the coming days and months, he added, saying that the ministry has taken all the necessary measures in coordination with the Trade and Health Ministries.

The board "will continue to sell cereals and pulses until the end of the season" wholesale, he noted, along with such staples as rice, chickpeas and lentils.

In addition, at around 150 TMO sales points nationwide, the board will also sell these foodstuffs retail to ensure that the public can purchase them at affordable prices, he stressed.

Turkey's Vice President Fuat Oktay early Wednesday said over 2,800 Turkish nationals have been brought home at their request from nine European countries Turkey barred entry from to stem the spread of the coronavirus.

On Twitter, Oktay said the evacuation was completed at 6 a.m. local time and the 2,807 nationals will be put under 14-day quarantine in large dormitories located in Istanbul and Kocaeli provinces.

"All measures for their health, safety, nutrition and accommodation have been taken in line with the rules set by the Health Ministry and Science Board (for coronavirus)," Oktay said.

Turkey brought most citizens home from coronavirus-hit countries, figures compiled by Anadolu Agency (AA) show. The country was among the first to evacuate its citizens from Wuhan, the epicenter of the virus in China, long before arranging flights for 2,807 from Europe. Evacuations from Europe surpassed any other evacuation operations by other countries.

The severity of the outbreak was largely felt first in the country when Turkey deployed a military cargo plane to Wuhan in February. Along with 32 Turks, the plane brought six Azerbaijani, three Georgian nationals and an Albanian citizen to Turkey. A few weeks later, a Turkish Airlines flight brought 132 Turks from Iran. Each returnee was placed in quarantine at a hospital in the capital Ankara specifically allocated for suspected infection.

Turkey last week closed its border gates to passengers from Germany, Spain, France, Austria, Norway, Denmark, Sweden, Belgium and the Netherlands to help stem the spread of coronavirus. On Wednesday, land borders with Bulgaria and Greece were also closed.

The virus's epicenter has now moved from China to Europe, according to the World Health Organization (WHO).

Late Tuesday, Turkey also confirmed its first death from coronavirus, an 89-year-old man. There are now 98 confirmed cases in the country.