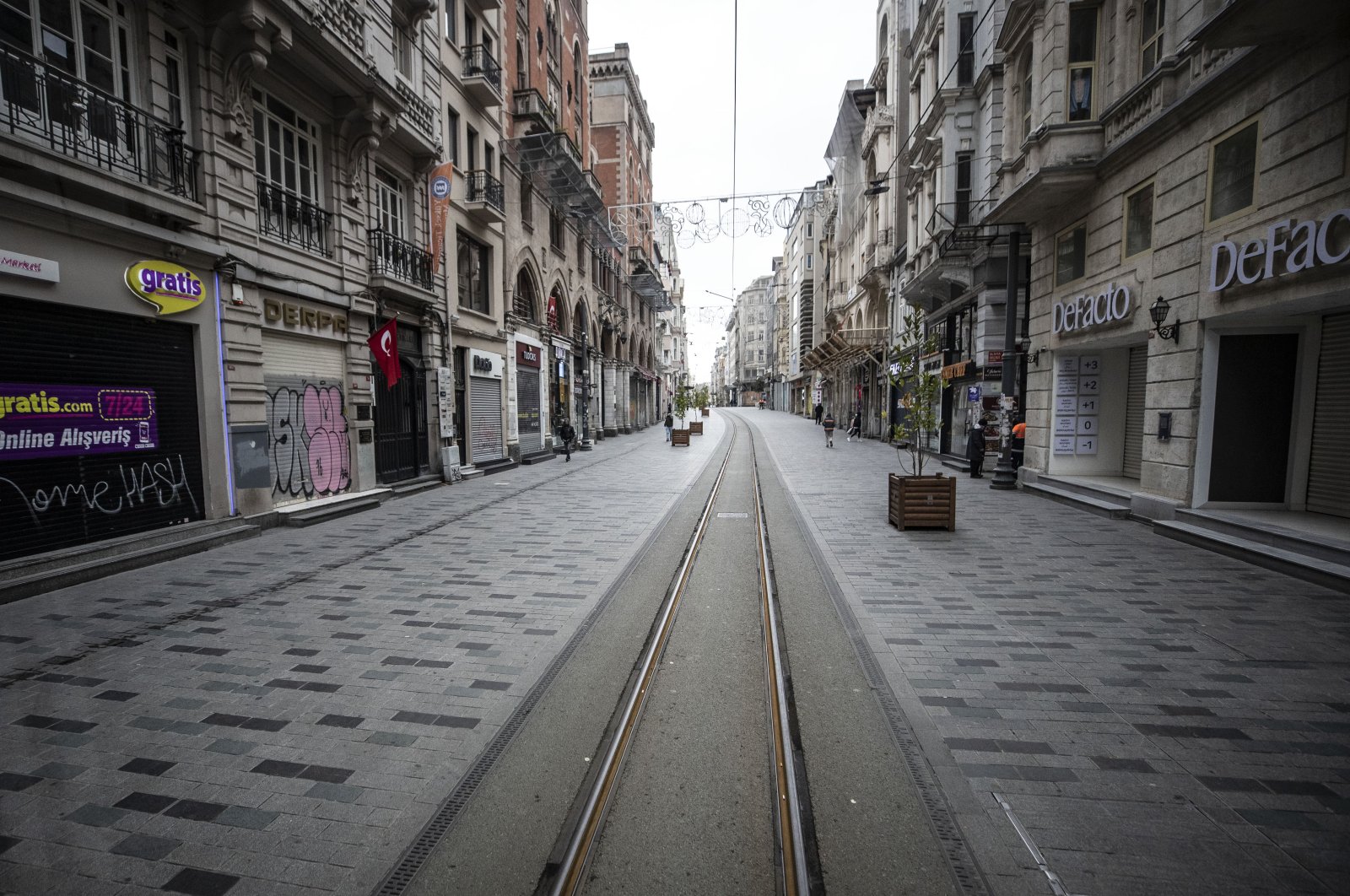 The number of confirmed cases has neared 20,000, and warnings of undetectable virus spreaders who show no symptoms appeared to have finally convinced more citizens to stay home as streets are deserted across the nation

The once-bustling streets of the nation’s most populous cities were desolate on Friday with more citizens heeding the call from authorities to isolate themselves at home as the death toll from the coronavirus continued to mount.

Photos circulated on media showed Istanbul’s famous districts and landmarks, which would be usually jam-packed with locals and tourists alike, now almost completely devoid of life. The city is now the epicenter of Turkey’s COVID-19 outbreak, according to the Health Ministry, as more than 60% of the country's total cases were recorded in the city.

Similar scenes were recorded in other Turkish provinces. From the capital Ankara to world-renowned tourist destinations such as Antalya and Bodrum, life completely came to a halt.

While crowds across cities have begun disappearing following the day Turkey announced its first case on March 10, some ignored the calls to stay at home, forcing the government to take increasingly drastic measures.

But it seems the few stubborn holdouts have realized the gravity of the situation as the Health Ministry reported more infections and deaths and warned people against asymptomatic virus cases – people who do not show any symptoms of COVID-19 yet remain highly infectious.

Health Minister Fahrettin Koca on Thursday said 2,456 new cases were recorded in the last 24 hours across the country, while 79 more people died.

According to data shared by the minister, 415 patients have recovered so far, while 1,101 were placed in ICU in critical condition.

Koca also said 18,757 tests were conducted in the last 24 hours, bringing the total number of tests carried out in Turkey to 125,556 since the outbreak began.

While the nation’s fight against the virus is far from over, the number of new cases appeared to show the precautionary measures have been successful in keeping the spread of the virus in check.

For the past three days, the number of new cases was reported between the 2,000-to-3,000 range, despite an increasing number of tests conducted, raising hopes that the authorities have managed to “flatten the curve.”

The ministry on Friday updated its guidelines on COVID-19 testing. Before the revision, only people who traveled abroad or had contact with a confirmed patient would be tested even if they showed clear symptoms.

Now, to get a better scope of how widespread the infection is, the ministry ordered all patients with a cough or breathing difficulty to be tested. The patient will also be ordered to wear a mask during the wait for their test results.

In recent weeks, Turkey has closed most public spaces, schools and universities and restricted public transport. It also imposed a 24-hour curfew for people aged 65 or over as well as for those with chronic illnesses. In Istanbul, people aged 65 or over with no financial means will receive food packages at their homes, Gov. Ali Yerlikaya said last week. The campaign covers nearly 50,000 people and will last for six weeks.

Stalls at local bazaars and marketplaces have to keep at least 3 meters (9.8 feet) of distance and are not allowed to sell nonessential items, including clothing, the Interior Ministry announced late Thursday. Food can only be sold in packages.

In some cities and towns, police officers at checkpoints have started the process of thermal screening arrivals from out of town. In a bid to raise awareness, traffic lights in most cities now flash with messages urging people to stay home.

If stopping the spread of the virus is one front of the battle, another would be coming up with a vaccine or a drug to use against it, as many experts believe the coronavirus would be a part of people’s life from now on even when the pandemic has been overcome.

“We laid the foundation for vaccine and drug research back when the virus was still confined to the borders of China. Right now, we have 14 projects in total; seven for a vaccine, another seven for a drug. We wanted to focus on projects that could conclude within the next nine months. We have created a portal where the studies are published. The 14 projects have so far requested TL 18 million ($2.7 million) funding,” Varank said.

“We can allocate all our research budget to them, as long as they come up with results.”

Speaking about locally developed ventilators and personal protective equipment, the minister said the ventilators are expected to be delivered by April 15, adding that projects were underway to develop portable ventilators as well.

“Regarding the masks, there is enough fabric to manufacture 25 million masks. So where do these complaints (about lack of masks) come from? They are originating from scalpers and hoarders. There is no shortage of masks for our health workers right now,” the minister said, adding that 198 firms were fined over TL 10 million for price gouging.

While officials fought to contain the virus and tried to come up with a cure, citizens and dozens of companies continued to do their part in alleviating the consequences of the crisis, as the fundraising campaign launched by President Recep Tayyip Erdoğan surpassed the $100 million threshold.

According to the campaign’s website, the total amount of donations has reached TL 846 million ($125 million) as of Friday afternoon, with more than 2 million text messages sent by citizens.

The campaign was launched by Erdoğan on Monday during a historic address to the nation. Explaining that the aim of the campaign is to provide additional support to low-income workers who are financially suffering from measures taken against the spread of the disease, Erdoğan said he was donating seven months of his salary to kick start the initiative.

Soon after the president, dozens of organizations and companies voiced support and pledged millions for the campaign.

Despite stopping almost all international flights more than 10 days ago, the Foreign Ministry still continued to bring citizens back home.

More than 220 citizens were placed in temporary quarantine late on Thursday after they were brought back from Azerbaijan and Qatar.

Around 150 citizens arriving from Azerbaijan were placed in dorms in the western province of Muğla, while 80 others evacuated from Qatar were placed in quarantine in northwestern Yalova province.

"We are saddened by the loss of Feriha Öz, who brought up thousands of doctors, diagnosed tens of thousands of patients,” Gönen wrote.

Born in Istanbul, she studied medicine at Istanbul University before working as a doctor at the Cerrahpasa Medical Faculty, where she was a prominent name in the field of pathology.

Öz became the second professor of medicine in Turkey to die from COVID-19 after Cemil Taşçıoğlu, the first Turkish doctor to diagnose the coronavirus infection in Turkey, passed away on Wednesday.