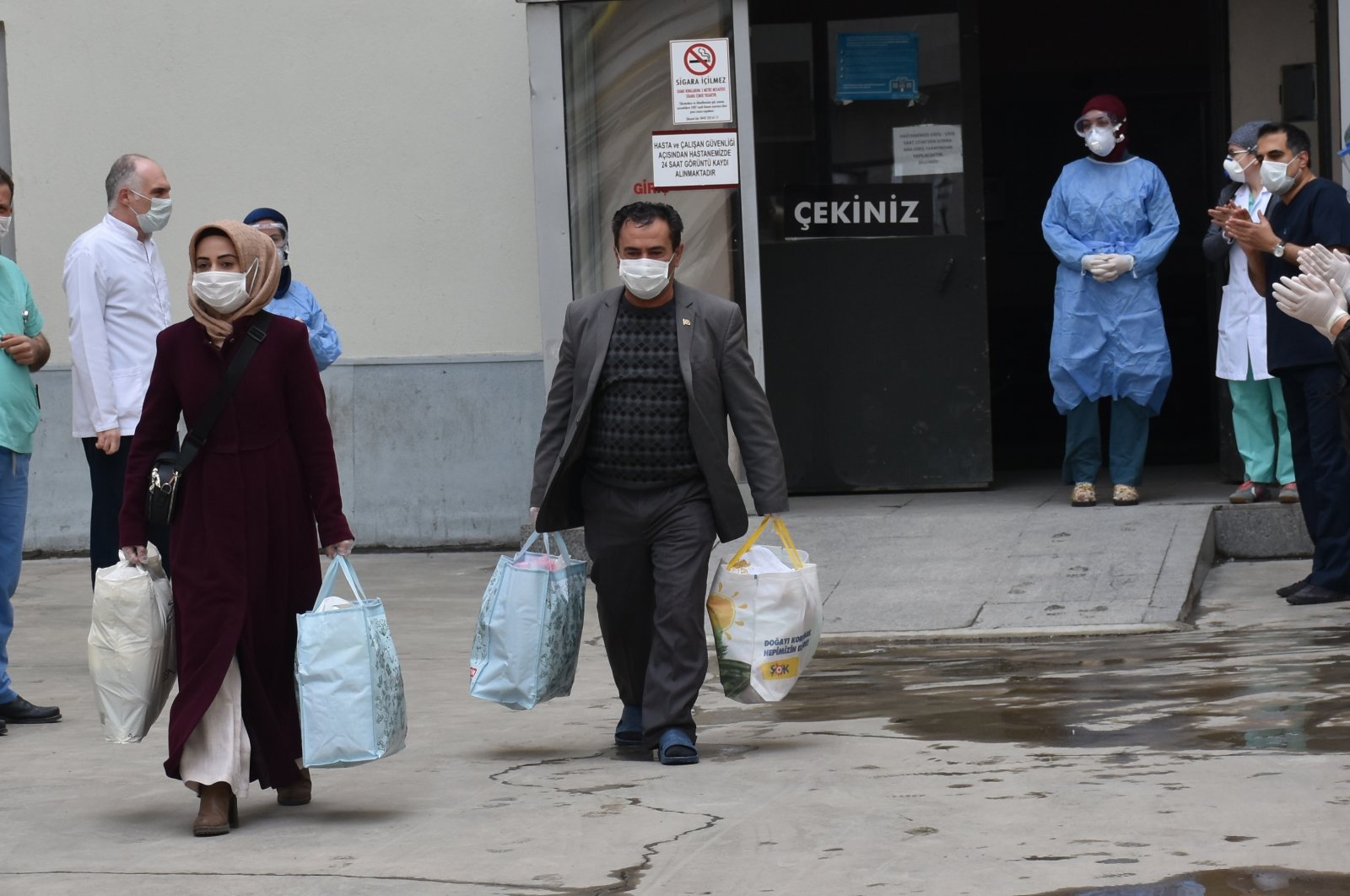 Nurses and doctors wave goodbye to two patients who were discharged from the hospital after they recovered from COVID-19, Erzurum, Saturday, March 4, 2020. (AA Photo)
by DAILY SABAH WITH AGENCIES Apr 05, 2020 4:14 pm

A nearly twofold increase in the number of patients who have recovered from COVID-19 raises hopes that the blood and sweat shed by health workers and the precautions have finally begun to pay off, though a steady increase of new cases leaves lingering doubts

“Hatice could you put on your mask?” a nurse asked as she knocked on the door of an elderly woman who was isolated in her room after being diagnosed with COVID-19. Two other nurses waited in the corridor for Hatice to come out.

As the elderly woman came out, the nurses waiting outside started clapping, congratulating her for being discharged from the hospital after being declared free of the coronavirus that has killed so many people around her age across the world.

It was a scene that has played out across the country throughout the weekend as Turkey saw a boost in the number of patients recovering. Hundreds of patients countrywide were sent home with exhausted nurses and doctors lining up to wish them well, as medical workers finally began to see the rewards for risking their lives during the outbreak.

According to the Health Ministry on Saturday, the number of patients who had recovered from COVID-19 increased by 69% to 768, compared to 464 on Friday.

The ministry announced that the death toll rose by 76 to reach 501, while the total number confirmed cases stood at 23,934.

While the numbers might look like a drop in the bucket that is an ever-increasing number of coronavirus patients, the nearly double in recoveries offered a glimmer of hope as the nation struggled to contain the virus, prompting the government to introduce a slew of drastic measures on Friday.

In an address to the nation on Friday, President Recep Tayyip Erdoğan announced additional measures against the coronavirus outbreak.

The president announced a partial curfew on citizens under the age of 20 as well as mandatory mask usage in crowded public places, in public transport, grocery stores and workplaces.

"We have decided to introduce a partial curfew for people under the age of 20 as of midnight Friday," Erdoğan said.

The gathering of crowds in all open spaces, including streets, is not allowed, he added.

But the most drastic move was the decision to shut down the borders of 31 cities, including Istanbul, for all vehicles, excluding transit passage and essential supplies such as food, and medical and sanitary products, to contain the disease.

"The shutdown of city borders will be in effect for 15 days initially; however, this period could be extended if necessary," Erdoğan said.

The government has taken a series of other measures to try to limit the spread of the coronavirus, from closing schools, quarantining around 50 towns and areas, and imposing a 24-hour curfew for people 65 or older.

The country rolls out a new measure almost daily. Governorates were tasked by the government with taking measures specific to every province, from limiting entry to cities to expanding social distancing rules.

With all international commercial flights brought to a halt, the Foreign Ministry continued to bring Turkish citizens home from abroad; this time repatriating nearly 600 people from Ukraine and Montenegro.

A total of 479 were repatriated from Montenegro, while 103 citizens, most of whom are students, were brought back to Turkey from Ukraine.

The evacuees were taken to dormitories to be monitored for a total of two weeks, Foreign Minister Mevlüt Çavuşoğlu said Saturday.

Spanish media on Saturday alleged authorities at Turkish customs had confiscated ventilators that were in transit from China to Spain.

“Confiscating medical products is an ugly accusation,” Çavuşoğlu said in a live broadcast and added that the Spanish Foreign Ministry corrected reports as well.

“We have authorized (the export of) 116 ventilators to Spain following the instructions of the Health Ministry, and they will be sent to Spain in the coming days,” he said, adding Turkey was an ally of Spain.

"Thank you, Turkey and Mevlüt Çavuşoğlu for authorizing the export of Turkish respirators bought by two of our Autonomous Communities Navarra & Castilla La Mancha due to the urgency in Spain, we appreciate the gesture of a friend and ally Turkey," Gonzalez said in a Twitter message.

Talking to local television channel Cuatro a few minutes before her tweet, Gonzalez said she "strongly" rejects all "unfair" and "inaccurate" accusations against Turkey, criticizing remarks of the opposition parties and media reports.

"It should be known that such statements used by the press, political parties and the public are harming our bilateral relations," she added.