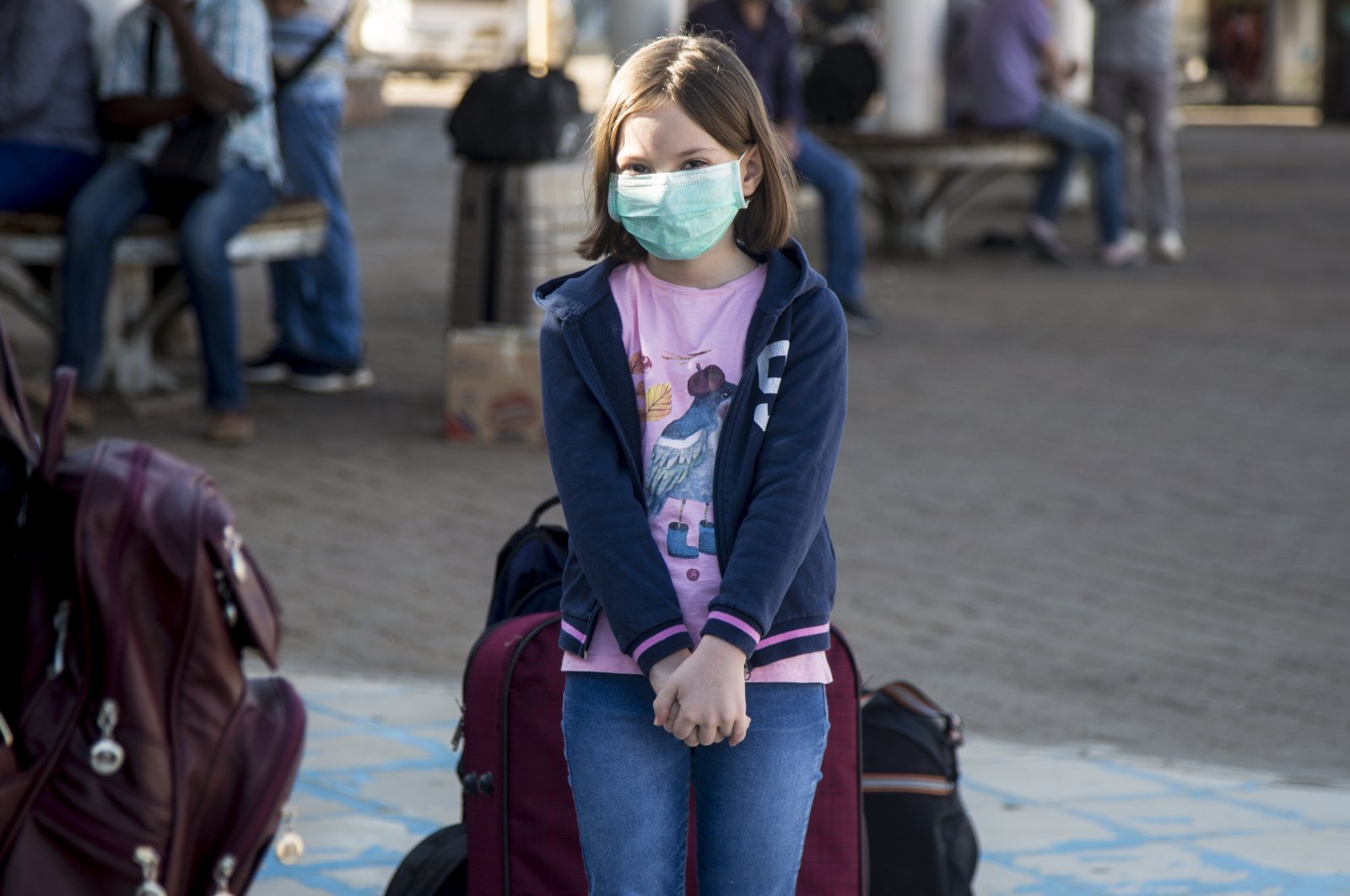 A Turkish girl waits at Khartoum International Airport to board a Turkish Airlines flight as part of Ankara's plan to evacuate its citizens, Khartoum, Sudan, April 22, 2020. (AA Photo)
by DAILY SABAH Apr 23, 2020 6:53 am

As Turkey brought back several thousand citizens stranded abroad over the past few days, top officials have offered insight into Ankara’s mass repatriation plan that will allow 25,000 to return home during Ramadan

More than 2,000 Turkish citizens stuck abroad during the coronavirus pandemic were brought back in a single day, according to authorities on Wednesday. The figures were just from one day of Turkey’s mass repatriation plan that commenced on Friday and aims to bring thousands more home in time for Ramadan Bayram, or Eid al-Fitr.

At the instruction of President Recep Tayyip Erdoğan and in coordination with the Foreign Ministry, Turkey decided to bring back nearly 25,000 citizens to help them spend at least part of the Muslim holy month of Ramadan with their families.

Tuesday’s tally was reported as 2,043 citizens from at least eight countries, including the U.K., Germany, the Czech Republic and Belgium.

Before embracing their families, however, the evacuees were placed under a mandatory 14-day quarantine to stop any with potential COVID-19 cases from infecting others, especially at a time when the country seemed to be on the brink of having the outbreak under control.

The citizens were scattered to dozens of dormitories across the country to spend time in isolation before reuniting with their families.

Speaking to Anadolu Agency (AA) on Wednesday about the evacuations, Vice President Fuat Oktay said 33,000 citizens have been brought home since Turkey carried out the first repatriation effort in January when hundreds of Turkish citizens stuck in China’s Hubei province – the then-epicenter of the coronavirus outbreak – were brought back.

“Right now, we have close to 26,000 citizens from 73 countries who have asked to be brought home,” Oktay said.

Saying that the first wave of evacuees were mostly students studying abroad or tourists who were stranded with sudden travel bans, Oktay said the new wave would include Turkish workers who wanted to return home after their workplaces were shut down due to the outbreak.

Explaining that Turkey is determined to bring all who wish to return home, Oktay said the size of the Turkish community in a country did not matter for Ankara to draft an evacuation plan.

“For example, we have countries where we only have 15 or 20 citizens. We don’t tell them, ‘You are only 15 people, stay there.’ We decided on central points where the evacuations would be carried out from, and we drafted flight plans from 59 countries. In total, 195 flights were planned,” Oktay said.

Upon arrival, the health of the returnees is thoroughly checked and then they are placed under precautionary quarantine, Oktay said.

“Our citizens are then placed in dormitories, which are regularly disinfected, and all of their needs, from food to hygiene, are provided by the officials,” he said, adding that the quarantine process is carried out with joint efforts from the Interior Ministry, governorates and the Disaster and Emergency Management Authority (AFAD).

The vice president said 87 dormitories across 73 provinces were prepared by the Youth and Sports Ministry to host any citizen returning to the country, adding that quarantine measures were prepared in line with advice from Turkey’s Coronavirus Science Board.

Calling the government’s investments in dormitories an expected benefit during the outbreak, he said Turkey’s use of dormitories was an exemplary move for other nations.

“We use these dormitories to host our military or official personnel coming from different provinces as well. We didn’t encounter any problems regarding capacity, and we don’t foresee to as well,” he said.

Dormitories were set aside to house quarantined citizens after they were vacated by students as Turkey decided to shut down schools and universities on March 12, days after the Health Ministry confirmed the country’s first COVID-19 case.

According to Oktay, Turkey owes much of the success of the plan to the presidential system, as he explained that directing many branches of the government from one central point led to a much more efficient evacuation process.

“Right now, we have five different ministries involved with the evacuation plan. And then you have dozens of other organizations below those ministries. But all of these work toward a single goal seamlessly because they are being directed from one central point. That is the advantage of our (presidential) system,” Oktay said.

Regarding the remaining citizens abroad, Oktay said more than 19,000 citizens were planned to be brought home just in the following week alone.

“We hope we can make considerable headway in our fight against this outbreak by Ramadan Bayram,” he said.

While Ankara hopes to repatriate most of its citizens by Bayram, Turkish citizens are one face of the medallion, as the Foreign Ministry also works with other governments to organize the evacuation of foreigners stuck in Turkey as well.

Speaking to Daily Sabah, Deputy Foreign Minister Yavuz Selim Kıran said the Foreign Ministry so far organized the return of foreigners from 30 countries to their homeland.

Saying that Turkey has always stood firm with its allies and extended assistance when needed, Kıran said Ankara’s efforts against the pandemic in and outside the country’s borders were appreciated by many of Turkey’s international partners, including the World Health Organization (WHO).

Saying that the repatriation of Turkish citizens was one of the most important goals in the Foreign Ministry’s agenda, Kıran said more than 70,000 have applied for an evacuation since the outbreak began.

Turkey on Tuesday confirmed 119 more fatalities from the coronavirus over the past 24 hours, bringing the toll to 2,259.

The total number of registered coronavirus cases surged to 95,591, as 4,611 more people tested positive for the virus, the Health Ministry said on Twitter.

So far, a total of 14,918 patients have been discharged from hospitals after recovering from the virus, with 1,488 discharged on Tuesday alone, the ministry added.