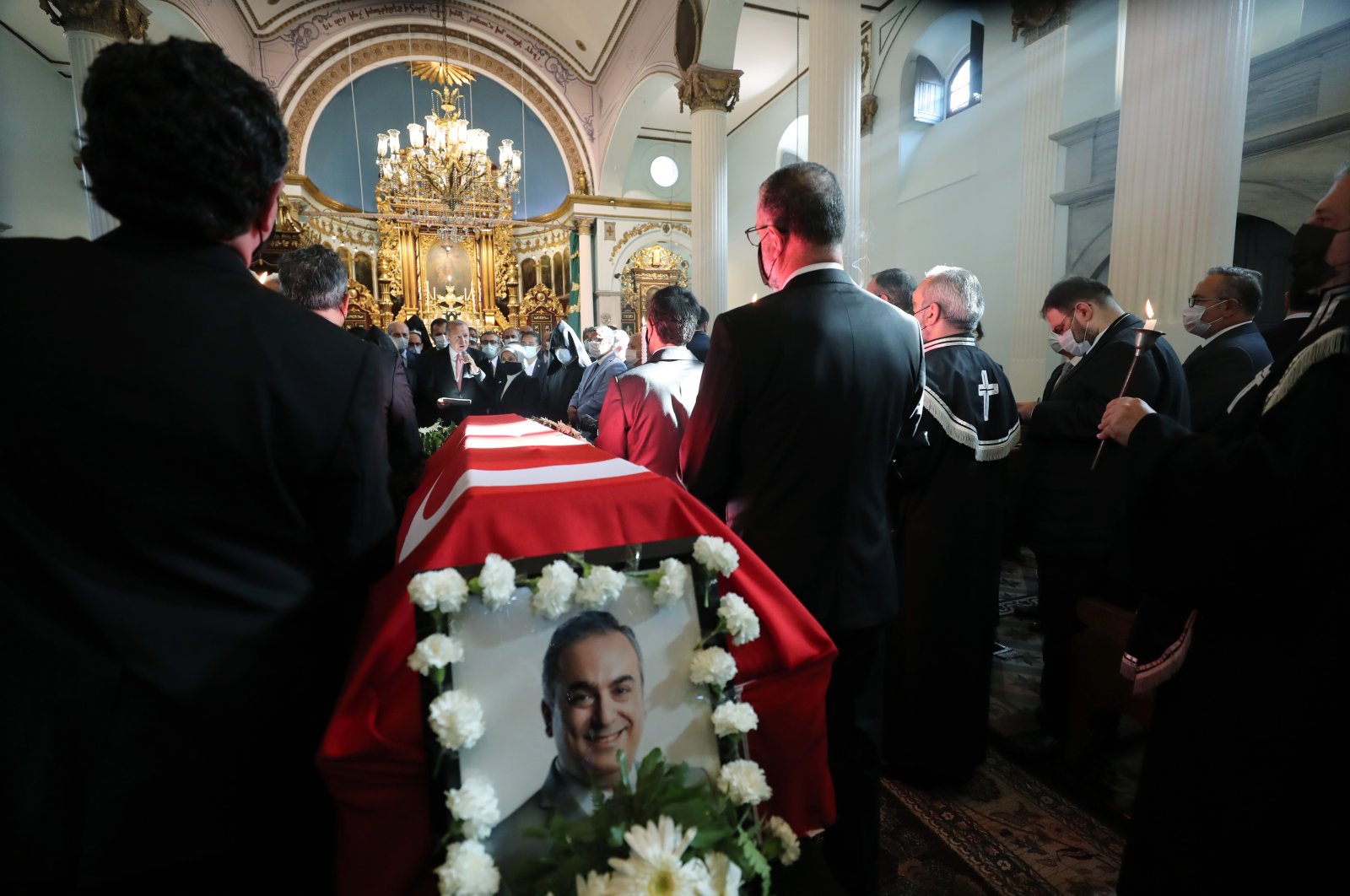 A funeral was held on Thursday for Markar Esayan, who died of cancer at the age of 51 on Oct. 16. President Recep Tayyip Erdoğan, first lady Emine Erdoğan and other dignitaries were among those who attended the event for Esayan, a journalist who penned columns for Daily Sabah and served as a lawmaker for the ruling Justice and Development Party (AK Party).

Esayan, a member of the Turkish Armenian community, studied business administration but found his calling in writing. He first made a name as a columnist for Agos, a newspaper published by the community where he penned articles since 1997. In 2001, he became a regular columnist upon the invitation of late Editor-in-Chief Hrant Dink. He left the newspaper one year after Dink's assassination in 2007.

He later worked as a columnist for other newspapers including Yeni Şafak and Akşam and was one of Daily Sabah's first columnists. He also found a second career as an author with three novels, including "Şimdinin Dar Odası" ("Cramped Room of Present"), which won a literary prize in 2004. The book, which focused on the ordeal of minorities in Turkey in the 1960s, was followed by "Karşılaşma" ("Encounter"), which offered insight into the plight of the Armenian community in the last years of the Ottoman Empire. After his next book, "Jerusalem," which told the story of a boy sent to a boarding school in the eponymous city, he later turned to nonfiction with "Iyi Şeyler" ("Good Things") published in 2011 where he compiled his articles and essays. It was followed by "Dünyayı Durduran 60 Gün: Meydan, Darbe, Demokrasi" ("60 Days that Stopped the World") in 2013 that focused on that year’s notorious Gezi Park riots and was co-authored with Cemil Ertem.

He was elected as a lawmaker by the AK Party in 2015 and served three terms. He was also acting chair of Parliament’s European Union Harmonization Committee. Before his illness disrupted his daily life, Esayan was serving as a deputy chair for the AK Party in charge of publicity and media and was a member of the party’s Central Decision-Making and Administrative Committee (MKYK).

The funeral was held at Surp Asdvadzadzin Patriarchal Church in Istanbul’s Kumkapı district where the coffin of Esayan wrapped in a Turkish flag was brought. Armenian Patriarch Sahak Maşalyan also attended the funeral presided by his predecessor Archbishop Aram Ateşyan. Esayan was buried at Şişli Armenian Cemetery after the funeral.

Speaking at the funeral ceremony, Maşalyan said he first met Esayan when the writer was 25. “Everyone who knows him will testify to his kindness. He was a lovely man with a good heart and had a sense of humor. He was also a charitable person and helped people in need, as someone who grew up amid financial difficulties,” Maşalyan said. “His lengthy disease reinforced his faith. He collected a spiritual treasure during his lifetime, and this served him well in his difficult days. He was born to give life to ideas, to write and to speak. He wrote novels and columns. He was inspired by Hrant Dink, and Hrant’s murder only boosted his passion for writing,” Maşalyan said.

The patriarch said Esayan’s political choice that changed from left to right resulted in criticism, but the late writer had the “right political stance stemming from the wisdom and coexisting experience of Armenian people who lived together with Muslims for centuries. His ideal was creating a happy country living under one flag, sharing joy and grief, to serve his country and nation with loyalty and seeing his country as sacred. In Esayan, people saw a brave and friendly Armenian man calling this country home and working for its prosperity. He served as a bridge in a way. We need more people like him who will build a bridge between Armenians and Turks. He always favored peace over war,” Maşalyan stated.

Addressing Erdoğan, Maşalyan said: “Your sharing of our pain in an Armenian church during these heated days of the Karabakh conflict contains meaningful messages.

"This worrying conflict in the Caucasus is not a conflict of religions. It is neither a conflict of Armenian and Azerbaijani nations. It is a challenge difficult to resolve left behind by the imperialist mind. Conflicts and wars are only a detail for neighboring nations who has a centuries-old experience of living together. It is important to build a lasting friendship. The value and importance of your personal efforts, Turkey’s efforts, to create it is undisputed. May God make you a messenger of peace to disperse the black clouds of war. Armenian citizens always pray for your well-being and health,” Maşalyan said.

For his part, Erdoğan said at the ceremony that “Markar’s name was synonymous with love for this country, this nation.”

“Life of this kind-hearted friend of ours was devoted to advancing democracy, rights and freedoms in Turkey, to support efforts to make Turkey stronger,” the president said. “He was an example of how to be a local, national intellectual with heart and sincerity and how it is not about one’s ethnic background, language or ideology,” Erdoğan said, adding that he believed the Armenian community had “many youths who grew up with love for country and nation and are ready to fill the void Markar left behind.”