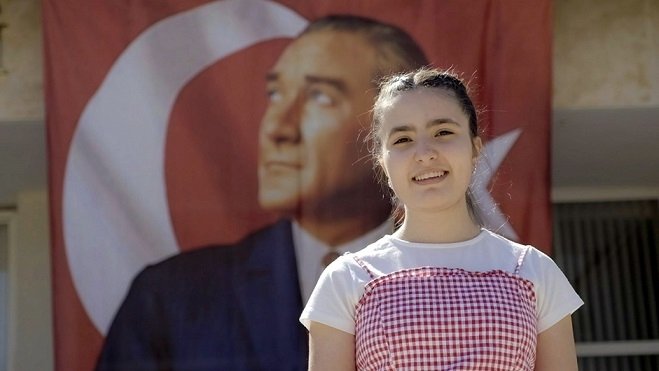 A university student poses in front of a poster of Mustafa Kemal Atatürk, the founder of the Republic of Turkey, in Istanbul, Turkey, May 18, 2021. (DHA Photo)
by Daily Sabah with DHA May 18, 2021 1:36 pm
RECOMMENDED

Although the number has decreased since 2007, youth (people between the ages of 15 and 24) still made up 15.4% of Turkey’s total population in 2020, the country’s statistical authority announced on May 17. Despite the decline, the country continues to hold the title of being the youngest nation in Europe.

As of the end of 2020, 12.89 million of the total population of 83.61 million people fall into the youth category, according to the Turkish Statistical Institute's (TurkStat) statement

The countries with the highest youth populations among European Union member countries after Turkey are the Greek Cypriot administration and Ireland at 12.7% each, while the lowest are Bulgaria at 8.8% and the Czech Republic at 9%.

The list ends in the Aegean province Muğla, located in southwestern Turkey, at 12.5%, narrowly edging out the northernmost city, Sinop, which has a youth population of 12.8%.

According to the research conducted between 2017-2019, life expectancy at birth was 78.6 years for Turkey on average, broken down into 75.9 years for men and 81.3 years for women.

The statistics also looked at the rate of happiness. Nearly half of the youth population of Turkey, 47.2%, said they were happy, a marked decrease from 56.7% in 2019.

The source of happiness among the youth came from three major factors, with 48% saying health was the primary factor for happiness, whereas 24.6% said success and 15.6% said love.