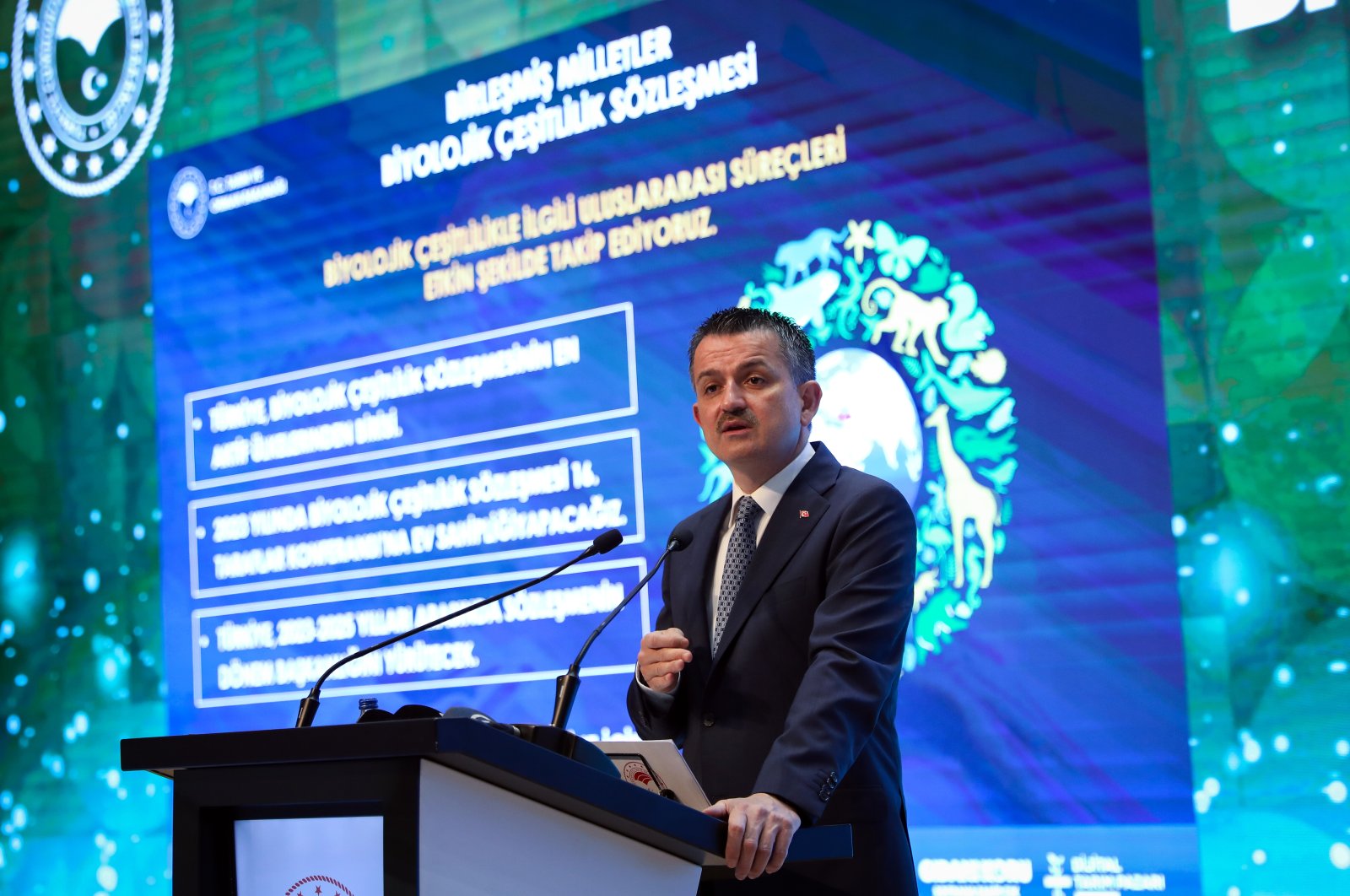 Minister of Agriculture and Forestry Bekir Pakdemirli speaks at the event on biodiversity, in the capital Ankara, Turkey, May 25, 2021. (AA PHOTO)
by DAILY SABAH May 25, 2021 3:22 pm
RECOMMENDED

Home to diverse climates and rich flora and fauna, Turkey is a hub of thousands of different species and the efforts to protect them are paying off, according to authorities. Speaking at an event on the issue, Minister of Agriculture and Forestry Bekir Pakdemirli said Turkey has made new additions to its biodiversity inventory, while the rest of the world is losing ground in its preservation attempts. Pakdemirli said they were working on a biodiversity protection law that will target biosmugglers and ensure the protection of intellectual property for inventions based on genetic resources.

Figures show Turkey is home to more than 13,000 plant and animal species. Records of the vast array of species are registered in the Noah’s Ark National Biodiversity Database which Pakdemirli introduced during the event in the capital Ankara on Tuesday. He said the database had more than 1.9 million entries so far, including information about species, their subspecies, newfound data and more.

Pakdemirli noted that some 1 million species were at risk across the world due to climate change and damage to habitats, adding that the decline was “unprecedented.” “Protecting biodiversity is no longer a choice but a necessity. Turkey is one of the richest countries in terms of biodiversity. We have great potential for animal and plant species. Turkey is also the only country where three out of eight gene pool centers in the world intersect and this almost makes our country a continent in terms of the number of species. In Europe, for instance, there are about 12,000 plant species, equivalent to the plant species we host,” he highlighted.

The minister said that they conducted the most comprehensive biodiversity study in the country’s history and defined 13,404 species across 853,000 observation spots, including 12,141 plants and 1,263 animals. More than 3,700 among them are endemic to Turkey. The inventory helped create a biodiversity map and made contributions to the scientific community through the discovery of new species, like an onion species in Istanbul and a thorn species in the southeastern province of Şırnak. Pakdemirli gave other examples of newly found endemic species, like five new plants discovered in the western province of Izmir and a flower in the central province of Eskişehir.

The Noah’s Ark database will both provide data for scientists and the business world, allowing for the use of plants in diverse sectors from food to medicine, painting materials, energy and defense.

Pakdemirli stated that endangered species and locations with high biodiversity were under constant observation, and currently 331 floras and 229 faunas are being monitored for preservation. He noted that there are also action plans for 100 species which are endangered or at risk of becoming endangered, from flowers endemic to Izmir to hyenas and birds in Şanlıurfa as well as a snake species in Artvin. The minister noted that they were also conducting a project to register endemic species and prevent foreigners from patenting them. Biosmuggling also poses a threat to the country and remote, uninhabited areas are especially targetted by biosmugglers from all around the world, snatching plants or animals and smuggling them abroad for commercial use. Pakdemirli said that they set up a data sharing system with security forces to prevent this and are working on a biodiversity protection law. The law will increase the punishment for biosmugglers and will create a legal framework that covers the issue in its entirety, including intellectual property, research and development, ethics, etc.