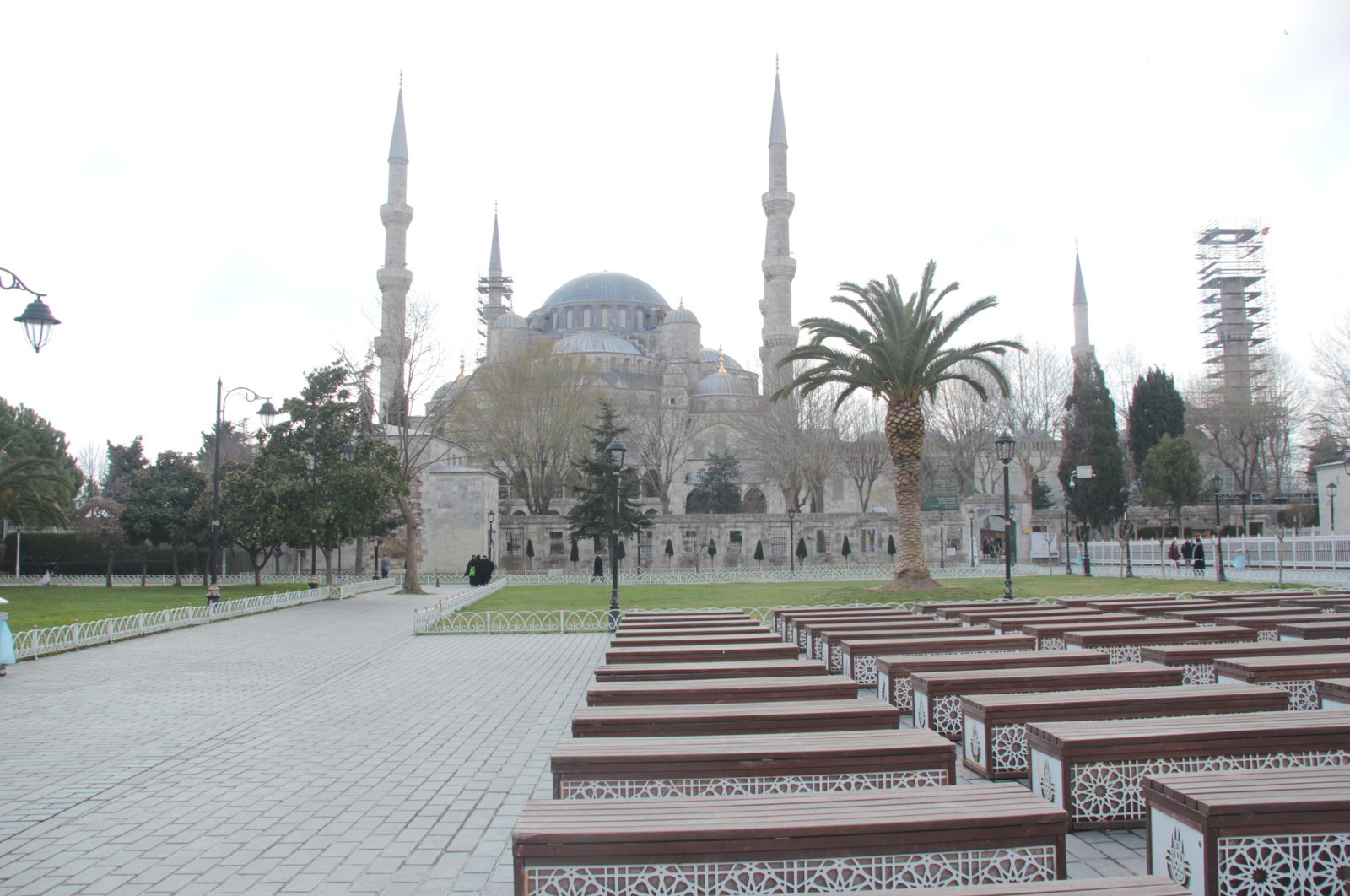 Turkey carried out more than 10,000 tests against the coronavirus, the country's health minister announced on Thursday, as the number of infections nears 200 and Turks increasingly heed the call to stay at home

Health Minister Fahrettin Koca announced Thursday that Turkey has carried out more than 10,000 COVID-19 tests so far and hopes to raise that number by another 10,000-15,000 tests per day. He made the comments during a briefing of deputies at Parliament in the capital Ankara on the deadly outbreak which has brought life to a standstill.

The coronavirus outbreak has claimed thousands of lives across the globe but made its way to Turkey relatively late. With three deaths so far and a rising number of cases – up to 191 – the country stepped up measures.

Koca said the ministry has obtained the contact information for 372,000 people who have recently arrived from abroad. "We are monitoring them through family doctors. We called 130,000 such individuals Wednesday alone to brief them," he said.

He said they will also increase the number of laboratories for testing from 25 to 36 cities. Koca noted that more than 4.6 million passengers were screened with thermal cameras at airports and 1,103 among 189,000 passengers entered through land border crossings were being monitored for coronavirus.

Koca said a diagnosis kit providing faster results compared to its foreign counterparts will also be available in the next two days and will be delivered to all cities soon.
The third death was the only one whose identity was disclosed. While addressing Parliament, Fahrettin Koca confirmed that Aytaç Yalman, a former general who died on March 16 at the age of 79, was infected. "He tested negative; however, his relatives were also tested, and some of them tested positive," Koca said. "In such kind of case, the test result could be negative at first, but it could be positive later.”

Meanwhile, the Turkish public has appeared to comply with measures and recommendations by authorities so far. Though few people were on the streets since the beginning of the week, crowds got thinner on Thursday after President Recep Tayyip Erdoğan appealed to the public to stay home as much as possible.

In Istanbul, Turkey’s most populated city and a major tourist hub, normally busy places like Taksim and Sultanahmet squares were empty save for a few tourists and Turks wearing face masks. Metro and metrobus stations were quiet even in rush hours while traffic congestion visibly dropped.

Commuters were mostly wearing masks and gloves as a precaution while they strived to keep distance and rushed to hand sanitizers installed at stations. Mass transit use dropped 59.1% as of March 18, Istanbul municipality announced.

Still, some people conveniently ignore the calls and go out for a walk. In the western city of Denizli and northwestern city of Edirne, municipalities decided to remove benches from the central squares, a favorite gathering place for senior citizens, as a precaution.

On Thursday, the country rolled out a new series of recommendations for restaurants, to prevent the further spread of the coronavirus. New precautions implemented by the Health Ministry and the Scientific Committee include increasing the distance between the tables in restaurants to more than 1 meter (3.28 feet), preferably 2 meters. Windows in rooms and other closed areas will be open during routine cleaning and will be ventilated for at least one hour after cleaning, according to the ministry. Particular attention will be paid to cleaning surfaces that are frequently touched, such as door handles, handrails, buttons, telephone handsets, toilets and sinks in common areas. Common items such as glasses and plates will be washed with water and detergent after each use and will be stored in a clean environment. Restaurant staff will pay attention to keeping hands clean. Hands will be washed with soap and water for at least 20 seconds, and alcohol-based hand sanitizers will be used in the absence of soap and water. Personnel with any signs of a respiratory infection such as fever, cough or respiratory distress will be asked to leave until they feel better.

Koca recently said in case of a dire situation, more measures, like the closure of shopping malls and restaurants, as well as a reduction in working hours at supermarkets, may follow. Koca said an increase in infection rates could be tied to several factors, from temperature and humidity to transmission in crowded areas, noting that the shutdown of schools has helped prevent a wider outbreak. “We have to keep a meter apart in crowded places, we should not go out as much, and we should be in self-isolation for 14 days if we have just returned from abroad. Those returning from abroad should wear masks if they have to go out,” he said.

Open marketplaces were also affected by the virus scare. In Istanbul, the municipality is considering the ban of the sale of goods other than food. In the southwestern city of Muğla, vendors at marketplaces started selling prepackaged vegetables and fruits, ending the usual practice of customers touching the produces with bare hands.

Pharmacies also see a huge influx of customers and some now started implementing the 1-meter rule, instructing customers to keep a distance.

Measures against coronavirus also affected wedding parties. Wedding halls and other venues are already closed while couples increasingly prefer to officiate their marriage with the lowest number of guests.

Professor Yeşim Taşova, a member of the Health Ministry’s Coronavirus Science Board, called on the public to take extra measures for protection, like washing packed products they bought from grocery stores, washing fruits and vegetables carefully and drying them before placing them in the refrigerator. Speaking to Anadolu Agency (AA) Thursday, Taşova also said not everyone should wear masks and asked only those suffering from an illness to wear them. She said gloves offered little protection if used improperly. “I see people with gloves touching everywhere and then touching the masks they wear. They might be infected,” she warned. Instead, she suggested carrying a bottle of cologne and using it frequently. Taşova also asked the public to immediately change their clothes, wash their hands and to have a shower if possible after they returned home.

After the closure of schools and a week of recess, Turkey will begin distance education for millions of students on March 23. Education Minister Ziya Selçuk told AA on Thursday that their crews and content were ready for online and broadcast lessons. Lessons will begin on March 23, at 9 a.m. local time and will be 20 minutes each instead of the 40-minute regular classes, said Selçuk.

The lessons will mainly be broadcast via television channels more than once throughout the day, due to possible internet bandwidth issues. "The lessons we will broadcast on television will also be related to previous topics in face-to-face classes," Selçuk added. Explaining that not all students had access to the internet, cellphones or computers, he said the lessons would thus be "television-focused." "Our teachers voluntarily prepared the lessons and subjects needed on television. Our teachers work in small groups in certain centers, studios and schools, and then the test broadcasts are done," Selçuk said.

He also stressed that Turkey was one of the few countries able to implement distance education on a national level. Besides televised lessons, Selçuk said Turkey announced its Education Information Network (EIN), an artificial-intelligence-based educational platform used by two other countries.

Fener Greek Orthodox Patriarchate in Istanbul ordered its churches to halt services and rites until the end of March in response to the coronavirus measures. The patriarchate, seat of some 300 million Orthodox Christians worldwide, announced the move in a statement late Wednesday. "Today we universally declare our ecclesiastical resolution and mandate to cease all divine services, events and rites, except for private prayer in churches that will remain open, until the end of March," the patriarchate said.

It appealed to everyone to limit their outings and travels to what is necessary, remaining in their homes for their safety and the protection of the general public. "The Ecumenical Patriarchate is monitoring the situation with an urgent sense of responsibility toward its faithful and all people," it said, adding that the halt to services would later be reassessed in line with the pandemic's development. Monasteries will continue to hold regular religious services for their monastic communities, but outside pilgrims and visitors will not be permitted entry, it said.

Ukraine, meanwhile, announced a ferry will be sent to Turkey to evacuate Ukrainian nationals requesting a return home. A shipping union said in a statement on Thursday that a ferry will be sent to Karasu Port in northwestern Turkey to transport Ukrainian nationals. Ukraine closed its borders to foreigners between March 15 and April 3 and closed its airspace to all countries on March 17. It is now working to bring some 35,000 citizens home from other countries.

MOSQUES TO CLOSE ON FRIDAY

Though mosques were closed for mass prayers, the Presidency of Religious Affairs (DİB) decided to step up measures as people in some cities tried to force their way in to perform mass prayers. In a statement to local branches of DİB, the presidency’s head Ali Erbaş ordered the closure of mosques on Friday and Saturday. Erbaş said “some people tried to exploit people’s religious sensitivities” following the announcement of a ban on collective prayers,” and they decided to close the mosques for two days.

A call for Friday prayers will also not be recited. Friday noon prayers are obligatory for all Muslim men and should be performed with the congregation. On Saturday, Muslims will mark Lailat al-Miraj, a holy night in Islam, which is observed by performing and reciting prayers collectively at mosques.