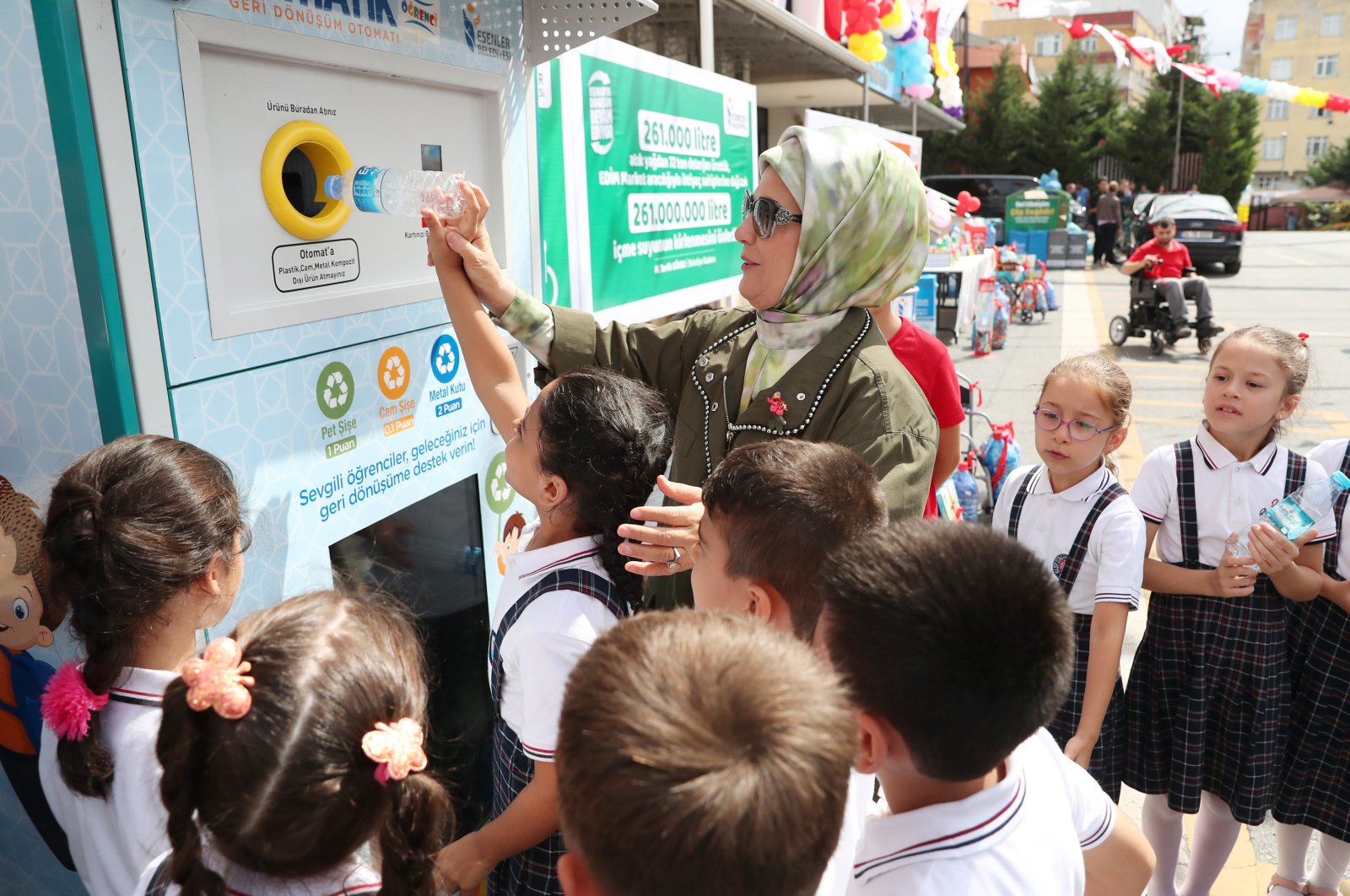 First lady Emine Erdoğan dumps a plastic bottle into a recycling bin at an event to promote the Zero Waste project among students at a school in Istanbul, Turkey, in this undated photo. (AA Photo)
by Daily Sabah with AA Jun 17, 2020 1:28 pm
RECOMMENDED

In the first four months of 2020, 93,000 tons of plastic packaging waste was collected and recycled, Turkey’s Ministry of Environment and Urban Planning announced Wednesday. This amount represents TL 100 million ($14.6 million) saved by the country in its bid to reduce pollution and boost recycling efforts. About 45,000 tons of this waste include plastic bags and packaging for drinks, cosmetics and hygiene products. The latest figures show the country’s plastic packaging waste recycling capacity reached about 600,000 tons from 100,000 tons in the last decade.

The government aims to curb the rate of plastic going into the garbage with a series of practices. Last year, it introduced a mandatory fee of TL 0.25 for single-use plastic bags and will switch to the sale of all beverages in deposit bottles in 2021.

These efforts are a follow-up to the Zero Waste campaign launched by first lady Emine Erdoğan a few years ago. By 2023, or the centenary of the Republic of Turkey, Turkey plans to bring the recycling rate for all waste to 33% and 55% for all plastic packaging waste.

Packaging waste collected by companies is converted into plastic furniture or toys, or used in textile production. One ton of plastic waste, if recycled, saves 5,774 kilowatts per hour of energy.

The ministry oversaw the collection of 230,000 tons of plastic packaging waste from residences, businesses and public spaces last year. Along with domestic use, a portion of recycled waste is imported.

Recycling is a concept that is gradually being embraced throughout the world in the face of the threats posed by global warming and pollution; yet, it has only found its footing in Turkey thanks to the Zero Waste Project. The project has helped Turkey save tons of plastic and has made its seas cleaner, with thousands of buildings, residencies and companies having implemented recycling into their waste disposal policies.

The project aims to promote the efficient use of the planet's finite resources, aiming to curb and even eliminate waste by separating it at the source for recycling. The Zero Waste policy was first launched at the Beştepe Presidential Complex in Ankara and went into effect at various government ministries over the course of 2017, later spreading to the municipalities, a number of private companies and specific public institutions, from schools to hospitals.

By the end of 2019, 25,000 public buildings had switched to the zero-waste system, with its first proponent first lady Erdoğan drawing attention to the concept everywhere she visited. From international events to the United Nations, she used these platforms to announce her aim of a comprehensive, nationwide implementation of the project all across Turkey by 2023.