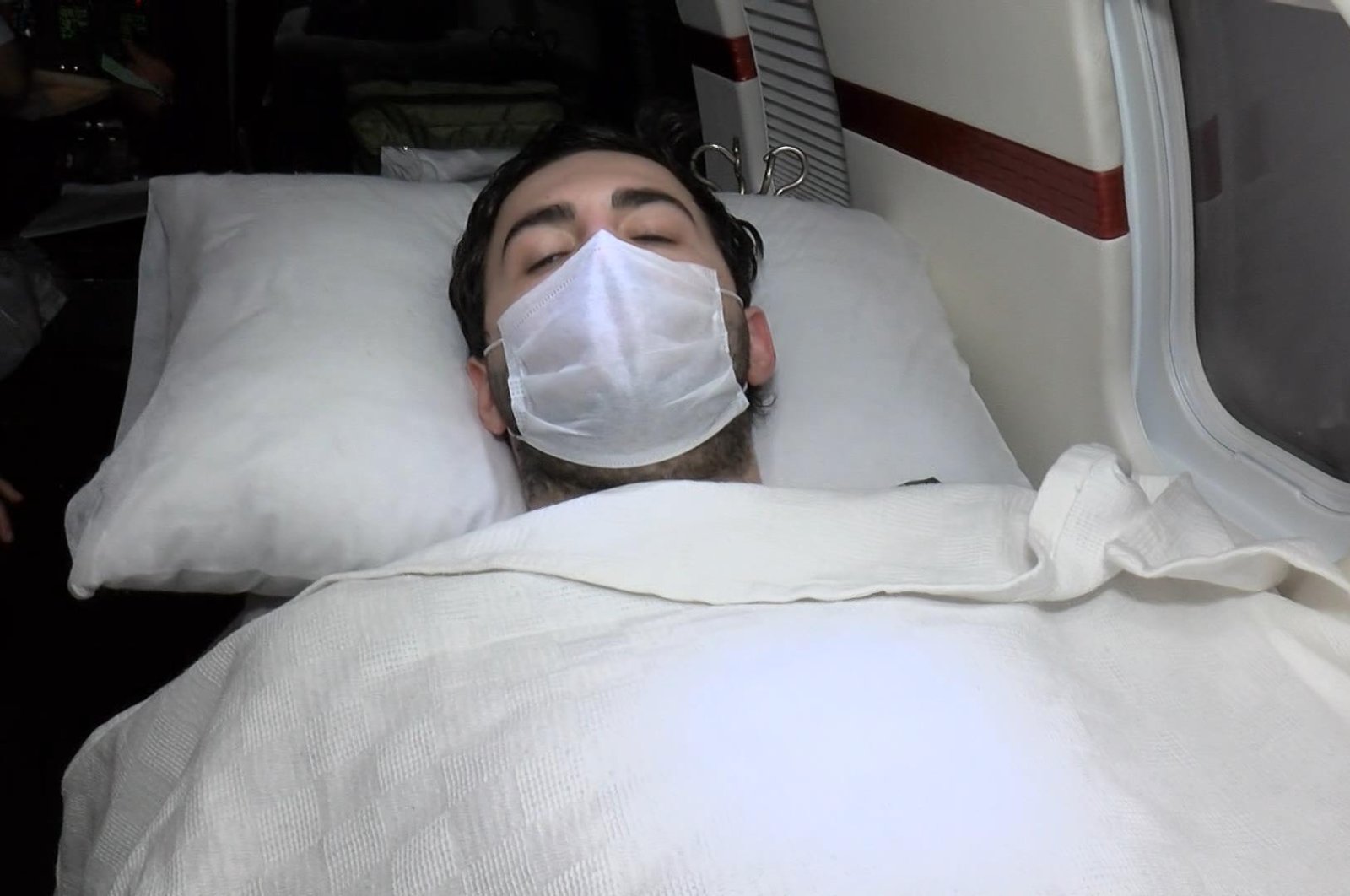 Haluk Hasan Seyithanoğlu, 24, lies on a bed inside the plane provided by the Turkish Health Ministry to take the student back to Turkey, April 27, 2020. (DHA Photo)
by Daily Sabah with DHA Apr 28, 2020 11:43 am
RECOMMENDED

Turkey’s Health Ministry on Monday brought back a Turkish patient who was under treatment for a collapsed lung at a hospital in Moscow to Turkey with an ambulance plane. The patient could not get a necessary surgery in the Russian capital due to the coronavirus outbreak.

Noting that three times he had suffered from a collapsed lung, Seyithanoğlu said he had not undergone a surgery but instead was treated by inserting a tube into his lungs. “Because of this I had not had surgery; it repeated three times. They did not take me to surgery because of the coronavirus outbreak. Then I made an application to (Turkish) Health Ministry,” he said, expressing his appreciation to Health Minister Fahrettin Koca and President Recep Tayyip Erdoğan.

Since the beginning of the coronavirus outbreak, Turkey has utilized its resources to assist Turkish citizens worldwide.

On Sunday, Emrullah Gülüşken, 47, who contracted the novel coronavirus but was not given treatment in Sweden, and his three children were brought back with an air ambulance and taken to Ankara Şehir Hospital.

In Malmo, Sweden, Gülüşken tested positive for COVID-19 but was denied treatment by authorities. His daughters, Leyla and Samira, shared posts on social media, asking for help.

Koca took swift action to bring the family back to Turkey.

"Dear Leyla, we heard your voice. Our ambulance airplane is taking off at 6 a.m. and we're coming to Sweden," Koca said early Sunday in a Twitter message, saying that the hospitals and doctors in Turkey are ready to treat her father.

Turkey's embassy in Stockholm and the Presidency for Turks Abroad and Related Communities (YTB) contacted the family, and Koca talked to Samira after their posts.

"After a doctor came to our home and checked my father, he called the ambulance and asked to be taken to the hospital. After being hospitalized, he was diagnosed with COVID-19. Despite this, they sent my father back home," she told Anadolu Agency (AA).

Turkey also has geared up efforts to provide necessary medical supplies to other countries during the coronavirus outbreak.

Foreign Minister Mevlüt Çavuşoğlu said last week on his Twitter page that Turkey has so far delivered medical equipment to at least 57 countries to help in their struggle against the pandemic.

After originating in China last December, the coronavirus, which causes COVID-19, has spread to at least 185 countries and regions. Europe and the U.S. are currently the worst-hit regions.