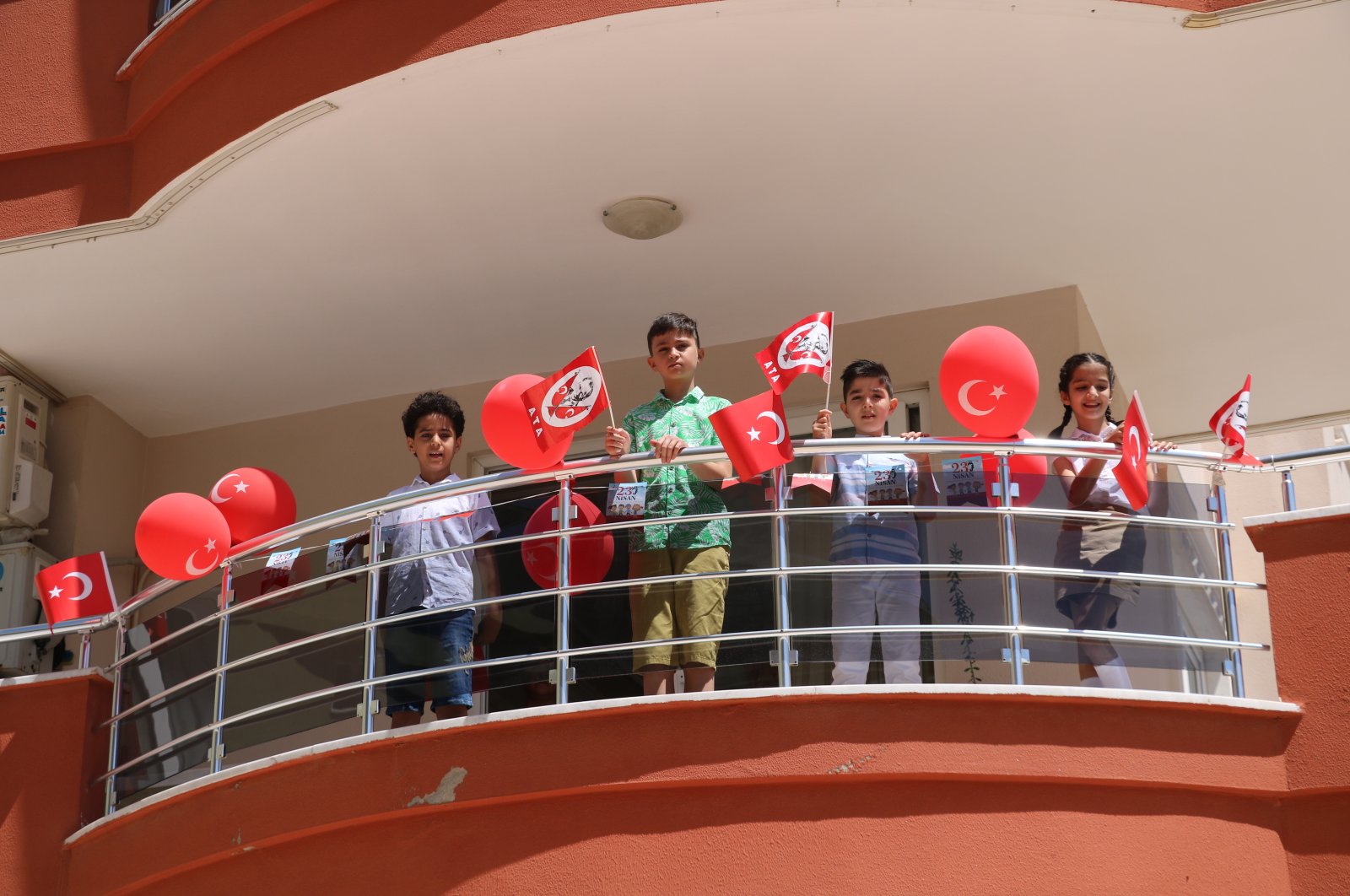 Children confined to home due to pandemic, wave flags and balloons at the balcony of their home, in Alanya district, in Antalya, southern Turkey, Apr. 23, 2021. (İHA PHOTO)
by DAILY SABAH WITH AGENCIES Apr 23, 2021 12:15 pm

Turkey is celebrating its April 23 National Sovereignty and Children's Day today, a unique occasion devoted a century ago to children and marked this year with joy countrywide despite restrictions due to COVID-19

Turkey marked April 23 National Sovereignty and Children’s Day with muted celebrations due to the COVID-19 pandemic. In the country where a curfew was imposed on April 23, only a few children and state officials attended the ceremonies in person. Some events turned to online platforms and a wider segment of people celebrated the day by decorating the windows of their homes with flags.

April 23, 1920, is the date of the opening of the Turkish Grand National Assembly, the first Parliament of the Republic of Turkey. However, in 1929, the republic's founder, Mustafa Kemal Atatürk, presented the April 23 festival as a gift to the children of the world. In 1929, it was celebrated as Children's Day for the first time. In 1979, children from many countries of the world began coming to Turkey, giving the day international recognition. Turkey is the first and only country to dedicate a national day to its children.

For the past two years, the celebrations for the day have evolved, just like all other things in our lives. Thus, the day traditionally marked outdoors with children showcasing their dancing skills, reciting poems and singing songs is a muted occasion this year.

Due to the coronavirus pandemic, the Turkish nation celebrated the National Sovereignty and Children's Day and the 101st anniversary of the Parliament's foundation from homes under a nationwide curfew.

President Recep Tayyip Erdoğan on Thursday celebrated the 101st anniversary of the nation's Parliament as well as the day dedicated to children, according to the country's Communications Directorate.

Erdoğan said in a message that the national day will once again be celebrated away from children due to the coronavirus pandemic, however, the excitement and joy of the day are shared by everyone.

"Our supreme assembly, which was subjected to attempts of coups, juntas, tutelage and terrorist attacks, and lastly was bombed by traitor FETÖ (Gülenist Terror Group) members on July 15, 2016, will continue to exist forever as the manifestation of the national will," Erdoğan said.

He said that under the roof of the Grand National Assembly of Turkey (TBMM), they are working to make the country bigger, stronger and more prosperous.

April 23 National Sovereignty and Children's Day is one of the most beautiful manifestations of importance and value given to children by the Turkish nation, the president said, adding that they are the most valuable treasure of the country.

"We are taking firm steps toward our 2023 and future goals by combining the strength we derive from our glorious history and the energy of our children with today's dynamism," Erdoğan said.

He also commemorated the founder of Turkey, Atatürk, and all of the fallen heroes of the country in his message.

On Friday, Parliament Speaker Mustafa Şentop, National Education Minister Ziya Selçuk and their delegations of officials attended an annual ceremony and laid a wreath at Atatürk's mausoleum in Ankara.

At the ceremony marking the 101st year of the TBMM, Şentop emphasized the importance of April 23 as a day devoted to children.

“It is our primary duty to leave a livable and beautiful world to our children and to endeavor to equip them in accordance with the requirements of the age. I would like to emphasize once again that we are aware of our responsibility,” he said.

Selçuk spoke with children from all 81 provinces of Turkey in an online meeting after the ceremonies in Ankara. In addition, Selçuk encouraged children and their families to adopt saplings to honor this special day. The minister also adopted five saplings in the scope of the campaign.

The Ministry of National Education published an online magazine for children. Selçuk said in a tweet that families can surprise their children with the printed version or show it to them online.

To mark the day, many skyscrapers across Istanbul were decorated with giant Turkish flags. The crescent and star flags were hung on skyscrapers in Istanbul's business center Maslak, drawing the attention of many Istanbulites.

Another ceremony was held in Istanbul’s Taksim Square with the participation of government officials and politicians in which the participants laid a wreath on the Republic Monument.

Family, Labor and Social Services Minister Derya Yanık gave her seat to a 10-year-old who is under state protection and stays at one of the children's houses of the ministry. The fourth-grade student, named Azad, recited all 10 stanzas of Turkey’s national anthem by heart.

The Istanbul police department organized "April 23 Police Cortege" on the occasion of the day. As part of the event, red and white balloons were released from a classic convertible at the head of the cortege.

Municipalities organize events for children. Istanbul Metropolitan Municipality, for instance, staged a play but it was exclusively online. And some museums organized special workshops for children and parents.