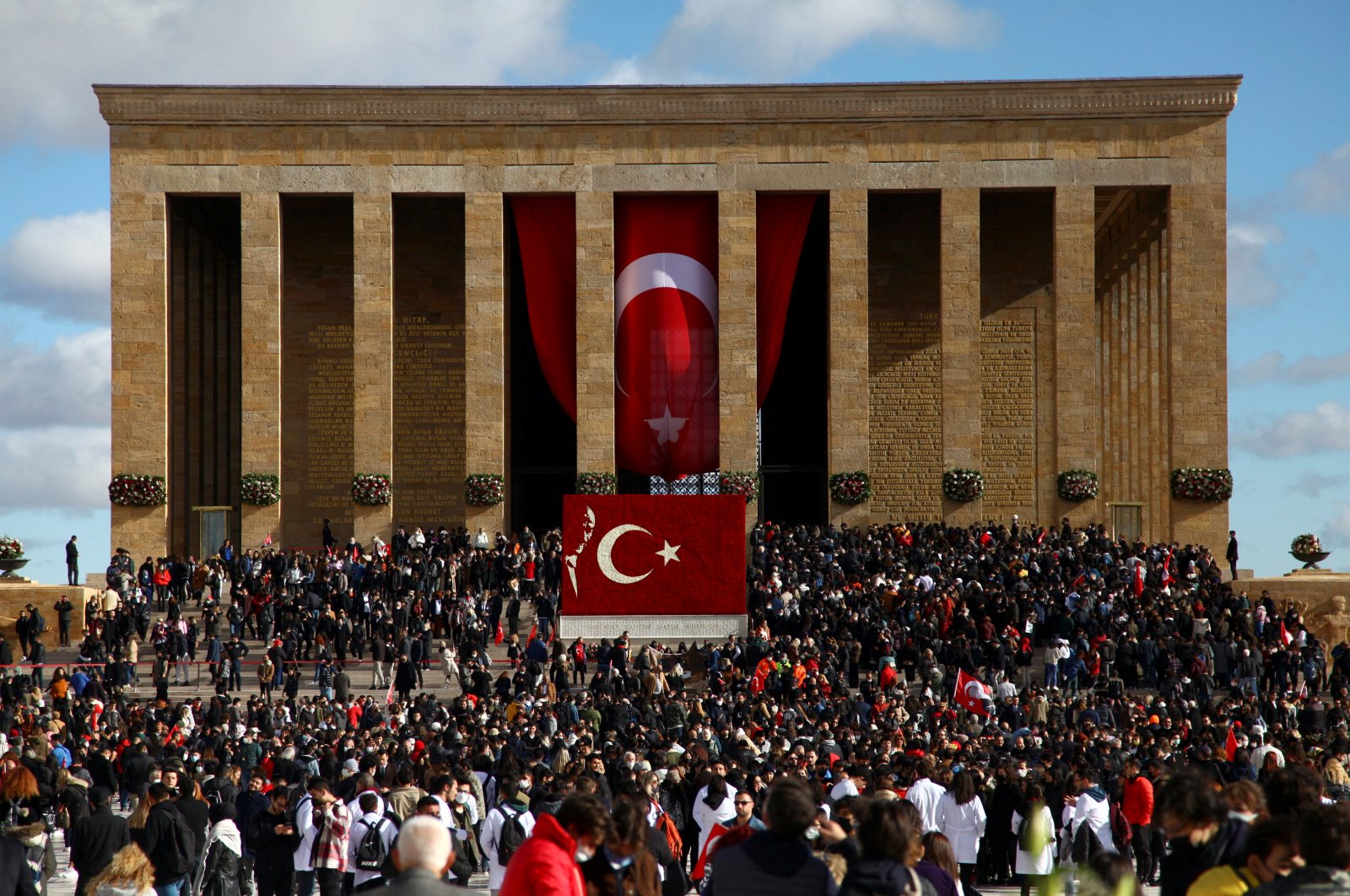 Turkey commemorated the 83rd anniversary of the death of the nation's founder Mustafa Kemal Atatürk on the morning of Nov. 10, as high-level officials, including President Recep Tayyip Erdoğan, together with members of the public paid their respects to the first president of the Republic of Turkey, by marking his hour of death and visiting his grave.

President Erdoğan marked the anniversary by vowing that Turkey will not tolerate any attacks on its integrity and values.

"We will never allow the integrity of our country; the survival of our state; the unity, peace and ancient values of our noble nation to be attacked," Erdoğan wrote in the memorial book of Anıtkabir, Atatürk's mausoleum in the capital Ankara.

Paying his respects to the country's founder and leader of its independence movement, Erdoğan said: "We continue to enlarge and develop our republic, which you established and entrusted to us, and to make it the shining star of its region and the world, despite the hostiles involved in the aspirations of the invaders."

"With the historical successes we have achieved in every field, especially in education, health, security and industry, we are moving toward our 2023 goals with determination," he added.

Before leaving his written message, Erdoğan placed a wreath on Atatürk's mausoleum and joined in a moment of silence before taking part in the national anthem along with his accompanying delegation.

Erdoğan, later speaking at a commemoration event in the capital Ankara, paid tribute to Turkey's founding father and commented on the development stages the country has gone through since its foundation.

"Of course, it is important to commemorate Ataturk, but the main thing is to understand Atatürk by following the traces of his struggle and correctly identifying the reasons behind it,” he said.

"This is the direction that Gazi (Veteran) pointed to our nation. Not words, action. It has never been forgotten that our new state, built on the basis of the superiority of the national will, is the continuation of our 2,000-year-old state line, despite all the quests and hardships we have been through. Our nation has shown to all friends and foes the fact that our Republic will live forever, by defending its state more strongly after each stumbling block,” he added.

Mustafa Kemal Atatürk actively fought and struggled wherever the nation's struggle for independence and future required, noted Erdoğan, saying Atatürk also followed Europe and the world closely to be ahead of the developments.

"I commemorate with gratitude our heroes who have made all kinds of sacrifices, including giving their lives, to make this land on which we have lived for 1,000 years our homeland, and everyone who has served our country and nation. May God have mercy on all our martyrs and veterans, I wish health and well-being to our veterans who are still alive,” he added.

The ceremony continued with a concert in the memory of Ataturk and was attended by the government ministers, commanders-in-chief of the armed forces, and officials.

Vice President Fuat Oktay also posted a message of respect on Twitter, saying he commemorated Atatürk with "respect, gratitude and mercy" on the 83rd anniversary of his death.

As is customary, daily life stopped at 9.05 a.m. local time (6:05 a.m. GMT), sirens wailed to mark the exact moment of Atatürk's death at the age of 57, and millions of people across the country observed two minutes of silence.

The battle of Turkish independence started on May 15, 1919, when the first bullet against the occupying Greek forces was fired. Incredible achievements on the battlefield led to Turkish independence, and the Republic of Turkey was founded on Oct. 29, 1923.

Atatürk became the first president of the republic until Nov. 10, 1938, when he passed away in Istanbul at the age of 57 due to cirrhosis.

Another ceremony was held at Turkey's Parliament to pay a tribute to Atatürk.

Turkey's embassies in Kazakhstan, Pakistan, Georgia, Azerbaijan, and Kyrgyzstan also held ceremonies in memory of the preeminent leader. Attendees observed a minute of silence at 9.05 a.m., the exact time of the leader's death, and laid flowers on Atatürk's monuments as part of the ceremonies.