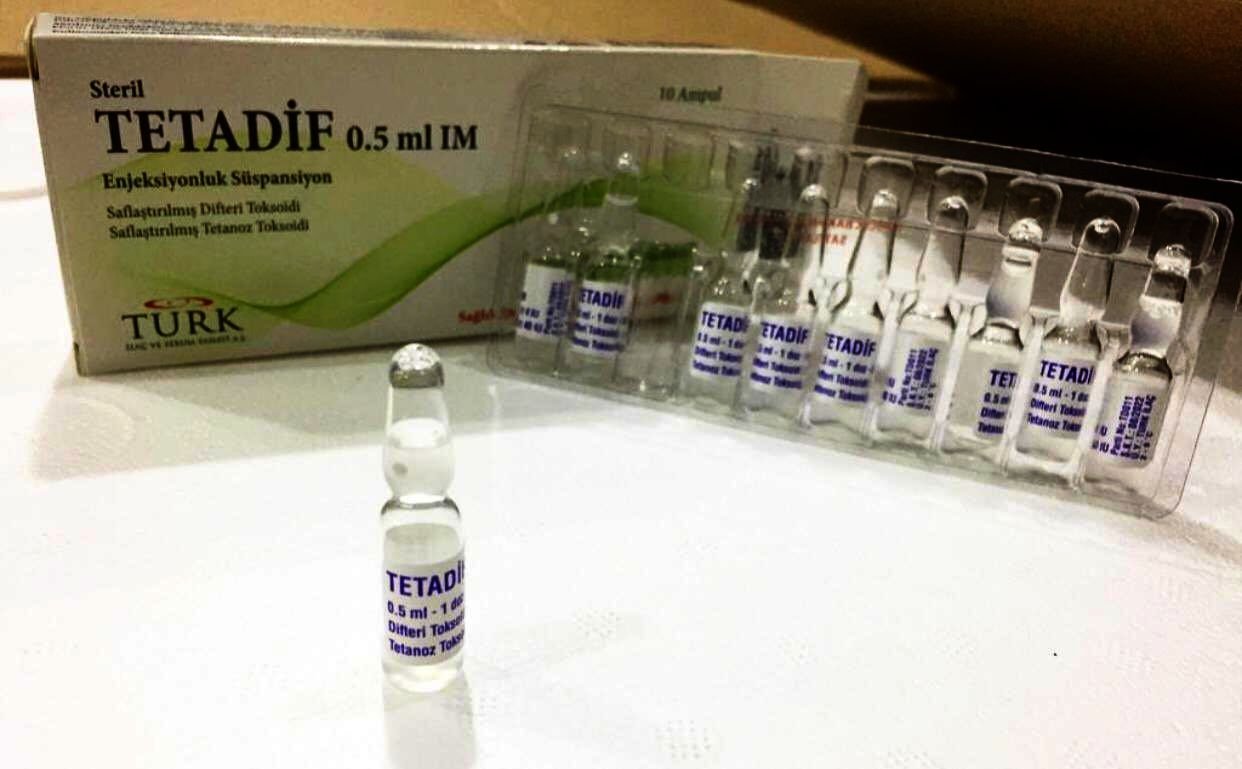 A photo of the tetanus-diphtheria vaccine shared by Health Minister Fahrettin Koca on his Twitter account. (Courtesy of the Health Ministry)
by DAILY SABAH WITH AA
Nov 25, 2020 11:33 am

As millions in Turkey await the development of a coronavirus vaccine, Health Minister Fahrettin Koca delivered some good news for the country long dependent on vaccine imports. Koca announced Wednesday that the first locally made tetanus-diphtheria vaccine produced at international standards was ready to be rolled out.

“All production stages of the vaccine for adults were realized entirely with local means,” Koca said in a written statement.

The minister noted that the vaccine was the end result of studies that began in 2015 as a part of the Health Ministry's drive for “local and national” products. “The vaccine study, which also included technology transfer, succeded,” Koca said.

The vaccine will be produced by private contractor Türk Ilaç. Koca said the vaccine was being produced in facilities with Good Manufacturing Process (GMP) certification and all processes were done “with local means,” including antigen production. The Health Ministry approved the production and had the first shipment delivered for hospital use, which the ministry oversaw, after quality inspections and efficacy tests.

“We will have more good news on locally made vaccine development,” Koca added.

Tetanus is caused by exposure to the spores of Clostridium tetani which live in soil, saliva, dust and manure. People are infected with the bacteria through wounds or burns. The infection, which targets the nervous system, causes painful muscle contractions. People of all ages can be exposed to the disease, though it is more common and serious for newborn babies and their mothers. Largely preventable in developed countries, it remains a significant health problem especially in low-income countries, according to the World Health Organization (WHO), which says it is common in places with low immunization coverage and unsanitary birth practices.

Diphtheria, another infectious disease similar to tetanus, is also caused by a bacterium. It infects the throat and upper airways and produces a toxin that affects other organs as well. It spreads through direct physical contact with infected people.

Nonetheless, all eyes are on the development of a COVID-19 vaccine. Both the private sector and public institutions have mobilized, and so far ERUCOV-VAC, an inactive vaccine candidate developed at Erciyes University in the central province of Kayseri, appears to be making progress. The first human trials for the vaccine started earlier this month.

"We have made good progress on our local vaccine. We plan to bring our own vaccine into the market by April at least," President Recep Tayyip Erdoğan told a meeting of the ruling Justice and Development Party's (AK Party) parliamentary group Wednesday.

Turkey is closely following vaccine developments in China, Russia, the U.S. and Europe, the president said. "We have already given preorders for some of them. We hope to give the first shots of the vaccines by end of this month," he said, adding that the vaccine should be used for the common good of humanity regardless of political differences or commercial incentives. "We believe that it does not make any sense for individual countries to secure themselves before the whole world is freed from the epidemic threat," he said, taking a jab at developed nations.

Clinical trials of the Turkish vaccine are progressing smoothly with none of the volunteers exhibiting any adverse side effects. Up until now, 44 volunteers are participating in Phase 1 of the trials of the ERUCOV-VAC vaccine.