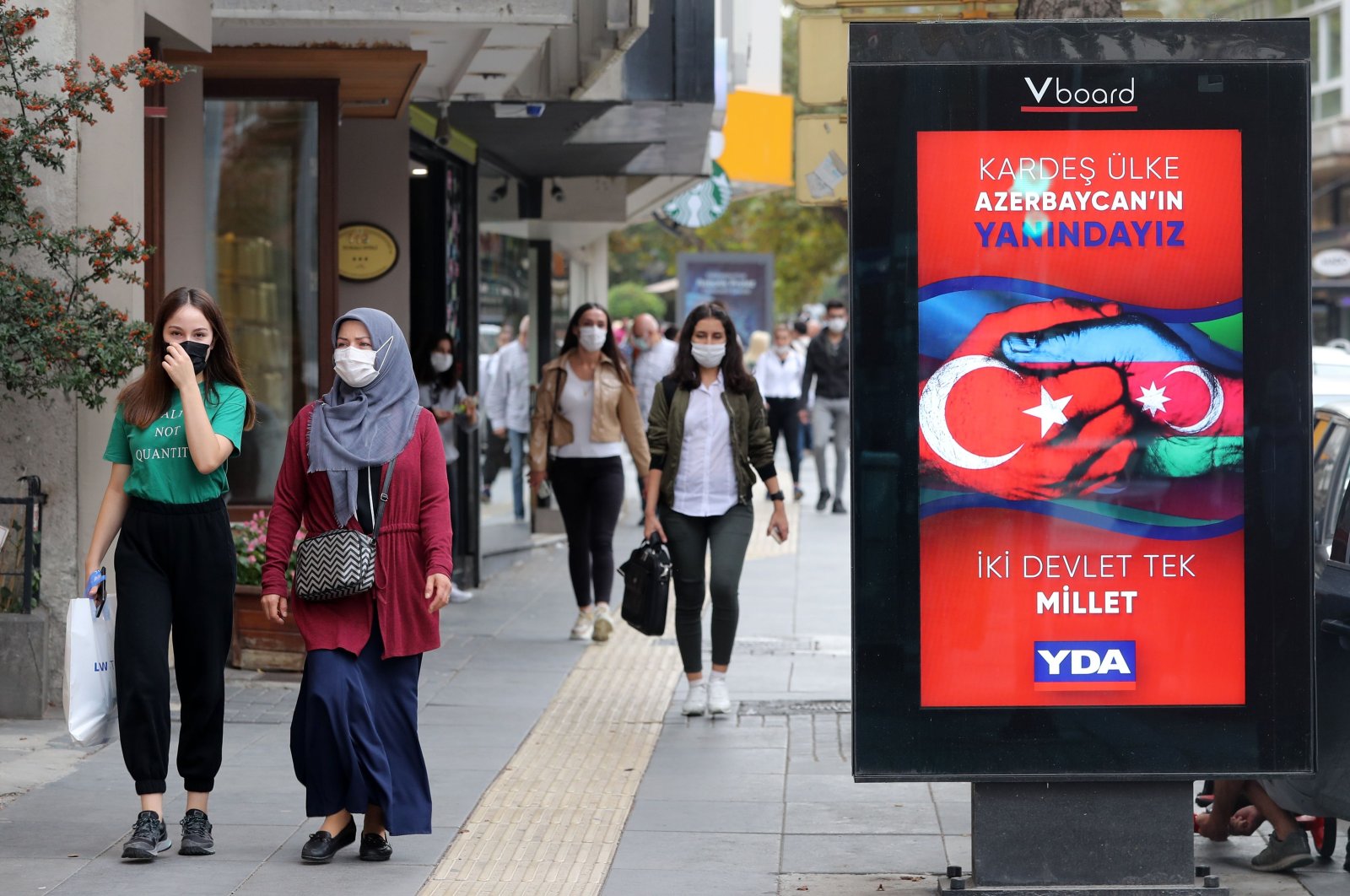 People wearing masks as protection against the spread of the coronavirus, walk on a street in the capital Ankara, Turkey, Oct. 9, 2020. (AFP Photo)
by DAILY SABAH WITH AGENCIES Oct 11, 2020 2:42 pm

The coronavirus pandemic has hospitalized thousands, exposing the public to an invisible fear – something the country's Health Ministry seeks to tackle with psychiatry and hotlines for distressed citizens

Suddenly finding themselves unprepared for a new era, millions stuck at home or in imminent danger of infection have also been forced to suffer the mental distress of the COVID-19 pandemic. As the public tries to adapt to a new form of life since Turkey's normalization process in June, the risk from the disease prevails, as do general fears. To help the public's anxiety, fears and negative feelings stemming from isolation and uncertainty, the Health Ministry has launched another battle in the frontline against the virus.

In all 81 provinces, the government launched psycho-social support programs, starting from March 30, a few weeks after the first cases were reported in the country. These include hotlines to address the issues such as changing daily habits, changing emotions like overwhelming concern, anger, fear and desperation stemming from the pandemic and chronic mental disorders. Hotlines serve both affected citizens and their families. Some 2,283 staff, from psychiatry experts to social service workers, work at hotlines.

The Health Ministry has also prepared psychiatric guides for health care workers going through long shifts under the risk of infection, as well as those placed in quarantine at home or in dormitories.

In Istanbul, the country’s most populated city, which usually dominates the list of cities with the highest number of patients, the local health authority has launched a Coronavirus Online Mental Support Program (KORDEP). Professor Ejder Akgün Yıldırım, one of the directors of the program, says the agency has served about 2,000 people from their hotline since the start of the pandemic. Yıldırım, a psychiatry expert at Istanbul’s Professor Mazhar Osman Mental Health Training and Research Hospital, says mental health hospitals and online counseling services run by volunteers help in the fight against the mental impact of the pandemic.

Yıldırım told Anadolu Agency (AA) Sunday that the biggest challenges people faced in the early stages of the pandemic were the obligation to stay at home for a prolonged period, as well as the difficulty to adhere to social distancing, saying their hotline was staffed with professionals prepared for face-to-face counseling, with crews dispatched to the homes of those in need.

“We repeatedly call and check on those who have applied to the hotline. Along with those not infected, we serve COVID-19 patients or people who have come into contact with a patient,” he said.

Yıldırım noted that around 60% of callers of the hotline were women. “This does not mean they are in more need than men. Some call for help for their relatives and families. The majority of callers had no known mental distress before the pandemic. Half of them were in a state of fear about whether they would be infected. Callers usually say they suffer from insomnia, panic and anxiety, while some are worried about the mental state of their loved ones,” he said.

Following the onset of Turkey's normalization process, most callers were those diagnosed with the virus. “Now," however, he warned, "People can go out freely and feel more relaxed. We see less concern from the public, but this is not a very good thing. People should remain cautious."

“A COVID-19 patient worries about their immediate family who face a state of uncertainty. Coronavirus is not something everyone can downplay though many people can recover without any trouble,” Yıldırım added. He also pointed out stigmatization that was evident in the early days of the pandemic when people actively shied away from coming close to patients.

“These people are in need of assistance instead of branding. Even though their friends and families cannot go near them, they should have emotional support,” he said, also warning about not accusing people outright for infecting others. “This is of no use. People can get infected no matter how cautious they are,” he said.

Turkey reported 1,649 new COVID-19 patients and 56 deaths in the past 24 hours as of Saturday, while Health Minister Fahrettin Koca announced that asymptomatic cases would also be announced soon.

According to daily data released by the ministry, new patients were identified in more than 113,102 COVID-19 tests, bringing the total number of cases in the country to 334,031. The death toll from the coronavirus has increased to 8,778, with 56 new fatalities. Meanwhile, the total recoveries from COVID-19 has increased to 293,145, with 1,391 patients being declared free of the coronavirus in the past day.

Koca told Hürriyet newspaper that the country would start declaring the number of asymptomatic COVID-19 patients from Oct. 15. At a news conference on Sept. 30, Koca said that the government was only sharing the number of COVID-19 positive cases with symptoms. "We will start (releasing all the numbers) on Oct. 15," Koca said in remarks published on Sunday. "We will share the cross-sectional screening results even though they show no symptoms. We will report these to the World Health Organization (WHO)." Cross-sectional screening tests are being conducted at airports, prisons and on people going abroad among others, Koca also said, according to the interview. Turkey will continue to conduct field screening tests for coronavirus cases, he added.

A drop in air pollution levels was one of the few benefits of the pandemic. An expert says this trend ended over the summer. Professor Hüseyin Toros of Istanbul Technical University (İTÜ) said pollution in the summer increased, however, and that for Istanbul, this rose by 39% compared with the same period in previous years.

Those forced to stay home due to curfews and self-imposed measures contributed to a decline in pollution in the early months of the outbreak, particularly for Istanbul.

Yet, as curfews were lifted and businesses reopened starting from June, pollution made a comeback – and even became more severe – as more people are now outdoors. Toros said that pollution decreased most in the Kadıköy district on Istanbul’s Asian side and dropped least in the city's Başakşehir district on the European side.