Turkey fights vaccine hesitancy in the east amid COVID-19 surge 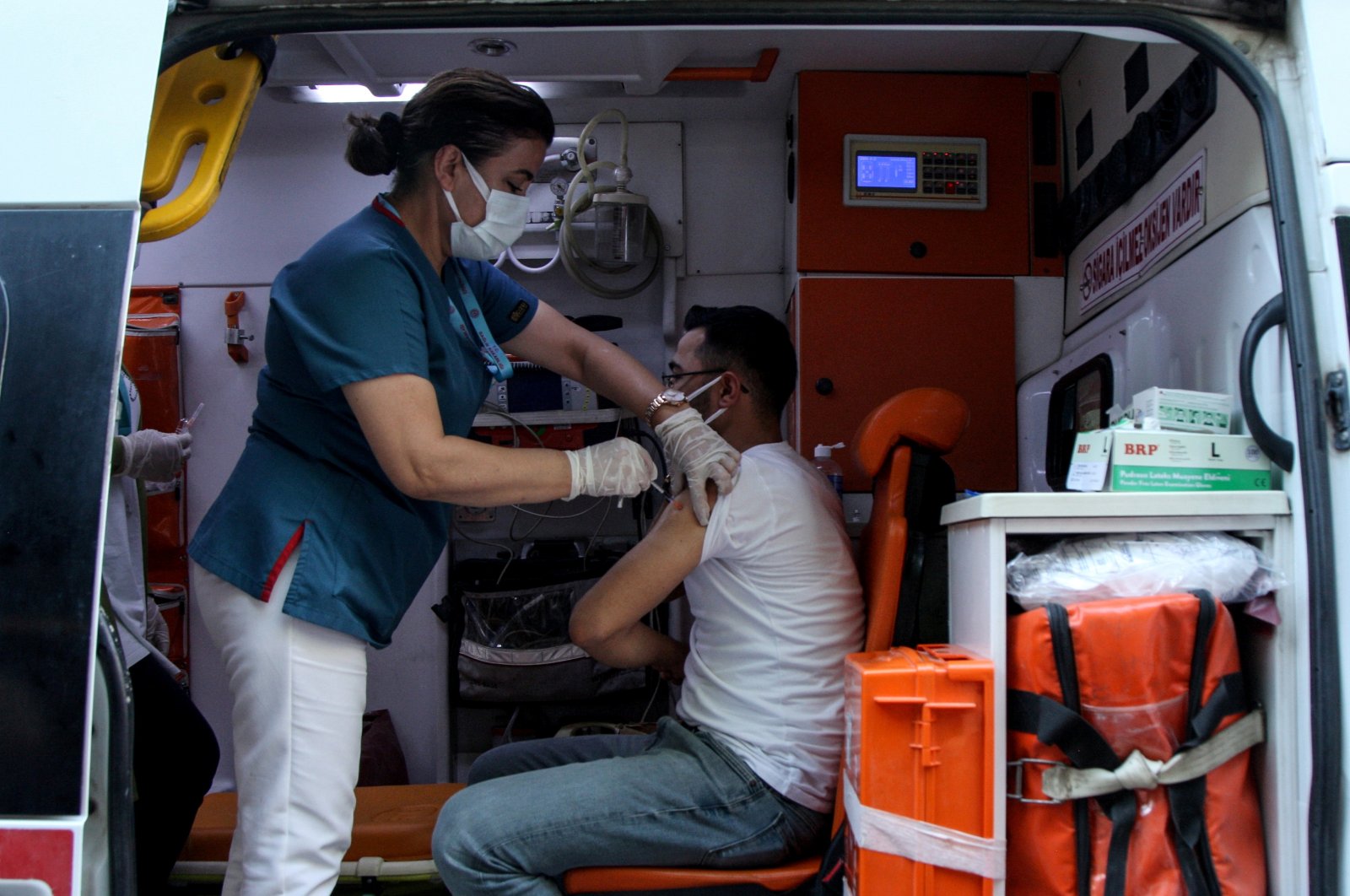 A man receives a dose of the Pfizer-BioNTech vaccine in an ambulance parked on a main street in Diyarbakır, southeastern Turkey, July 27, 2021. (REUTERS PHOTO)
by Daily Sabah with Reuters Jul 29, 2021 9:57 am
RECOMMENDED

"The pandemic of the vaccinated," as some call it, is raging amid repeated calls by authorities urging the public to get their jabs to prevent the rising number of cases. For Turkey, where millions are still not vaccinated, the inoculation drive is of grave importance. Health Minister Fahrettin Koca announced on Wednesday that 87% of active cases were those who were not inoculated. The surge in cases is particularly worrying as the country faces a wave of delta and delta plus cases overtaking the original strain of the coronavirus.

In the southeastern Turkish city of Diyarbakır, health workers' pleas to citizens to get vaccinated against COVID-19 ring out through the streets as a surge in new cases in the country's east, where vaccination rates lag, alarms authorities. "Valued people of Diyarbakır, the best way to be protected from illness is vaccination," a health worker announces through an ambulance speaker, as part of a mobile campaign that started during last week's Muslim holiday of Qurban Bayram (Eid al Adha). The mobile teams have vaccinated some 5,000 people in 15 days by visiting neighborhoods and villages and educating people, said Semih Erdal Tekay, a local health official. Nearly half of Turkey's population of 84 million has received at least one vaccine dose, but eastern provinces, where suspicion of the vaccines lingers, have seen slow uptake.

The region has led a national surge in new cases to nearly 20,000 a day from around 5,000 two weeks ago. In Diyarbakır, one of the largest cities in the region, where around 41% of people over 18 have received at least a first dose, cases nearly doubled in the week of July 23 to 224 per 100,000 people. Koca said on Wednesday that the rise in cases corresponded to vaccination levels for each province, adding that people should also wear masks and social distance.

Şeyhmus Akcin, a local resident, got a vaccine in an ambulance parked on the street. Some people did not want a shot because of misinformation on social media, he said. While Turkey's health infrastructure has been efficient in administering vaccines, the nationwide program faced setbacks earlier this year due to supply issues. The vaccination rate picked up significantly in June after Ankara reached a deal with Pfizer/BioNTech for more deliveries, but cases have been on the rise since early July.

"Everyone should get vaccinated," said teacher Ercan Güngör, adding the academic year was about to start and children's education could be affected. "I don't think the pandemic can be reversed without vaccination."