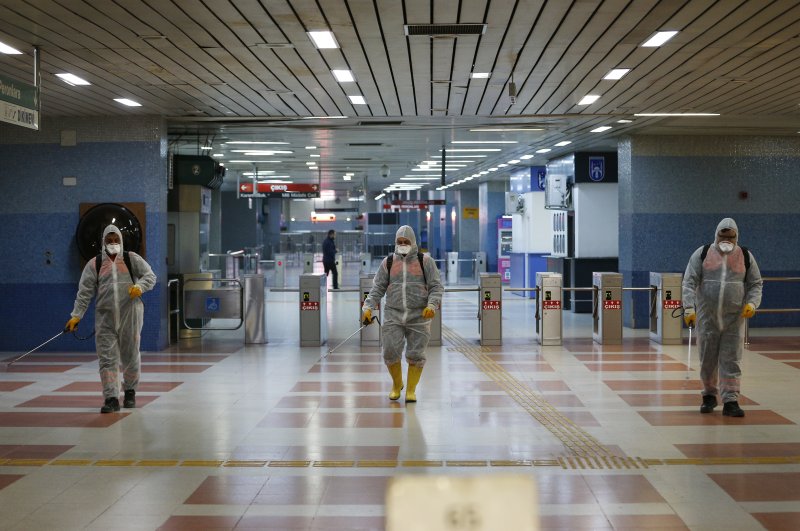 With the coronavirus outbreak knocking on Turkey's door, the country has halted flights to and from Italy, Iraq and South Korea while land border crossings with Iraq have been sealed

Still successfully free of the coronavirus that has claimed lives across the world, Turkey remains vigilant. Health Minister Fahrettin Koca said Saturday that all passenger flights to and from Italy, Iraq and South Korea had been halted due to outbreaks in those countries. The measure took effect at 12 a.m. on Sunday, he said, adding that the land crossings between Turkey and neighboring Iraq also were closed. Ankara has also "temporarily" closed land transport from neighboring Iraq, Koca tweeted. Turkey had previously halted passenger flights to and from Iran and China.

At the Habur border crossing with Iraq, gendarmerie and police set up checkpoints to turn back drivers unaware of the sudden closure on Sunday. In Üzümlü, only Turkish nationals returning from Iraq have been allowed to return, while customs personnel wearing masks have turned down the entry of Iraqis. A field hospital is also being set up at the border crossing to examine returning Turkish citizens against the coronavirus.

From Iran to Azerbaijan and Greece, Turkey has seen its neighbors reporting coronavirus cases one after another over the past few weeks while suspected coronavirus cases in the country turned out to be non-viral infections. On Feb. 27, an anonymous patient was admitted to a hospital in the southern city of Adana upon returning from Saudi Arabia where the individual had gone for an umrah pilgrimage. The patient, suffering from a case of severe cough, was not found to be infected with the virus, the hospital said in a statement over the weekend, after two days of isolation at the hospital. Last week, Saudi Arabia announced a temporary suspension of allowing pilgrims to visit the Prophet's Mosque in Madinah over concerns of the spread of virus. A large number of Turks are among visitors to Saudi Arabia for umrah, a lesser pilgrimage than hajj, which is an annual occasion in which millions from around the world gather to perform in Saudi Arabia. Umrah visitors from Turkey started returning home this weekend. At Istanbul Airport, throngs of umrah pilgrims arrived on Saturday night from Saudi Arabia, while authorities deployed additional medical crews and 16 ambulances for returnees as part of coronavirus prevention measures. Passengers were also monitored through thermal cameras.

Professor Recep Öztürk, a member of the government's Coronavirus Science Board, specifically set up to tackle the issue, says they definitely knew that there was not a single case in Turkey but added that a likely outbreak would require a good cooperation between the state and the public. Speaking to Anadolu Agency (AA) on Sunday, Öztürk said they would concentrate on suspicious cases and were doing all they could to prevent entry of anyone infected with coronavirus into Turkey. He said they had already allocated hospitals for the transfer of coronavirus patients and had isolation units in place for people who came into contact with infected people.

"Still, health agencies fighting alone against the virus is not sufficient. We need a perfect cooperation between the state and the public," he said, calling on the public to have awareness and learn the symptoms for a faster process of quarantine. He listed measures people who suspected themselves of coming into contact with a suspected patient. "People should not use the possessions of a patient. Every place where the patient is suspected to touch should be cleaned," he warned. Öztürk says the virus is more dangerous for elderly people and less so for children. "It is clear that the virus is sometimes deadly for people above the age of 50 and definitely deadly for people above the age of 70. It becomes more acute if the patient already has other diseases like kidney failure, heart diseases or diabetes," he said.

Öztürk stated that a good cooperation between the public and state and self-imposed measures by the public helped the country to dodge the SARS virus threat in 2002, while no cases of MERS, the second large pandemic to threaten the region in recent years, were reported in Turkey. He reiterated that Turkey had fine a health infrastructure and protective equipment in the fight against the coronavirus and already had a roadmap for how to deal with the issue. "I don't believe we will see much impact even if coronavirus makes it to Turkey. Cases would be isolated to a few and in a few cities at most. People should not panic even if a case is reported here," he said. Öztürk also lauded China's transparent stance on the issue after the first virus case reported there. "If they did not quarantine a whole province (of Hubei), the virus would spread more," he said.