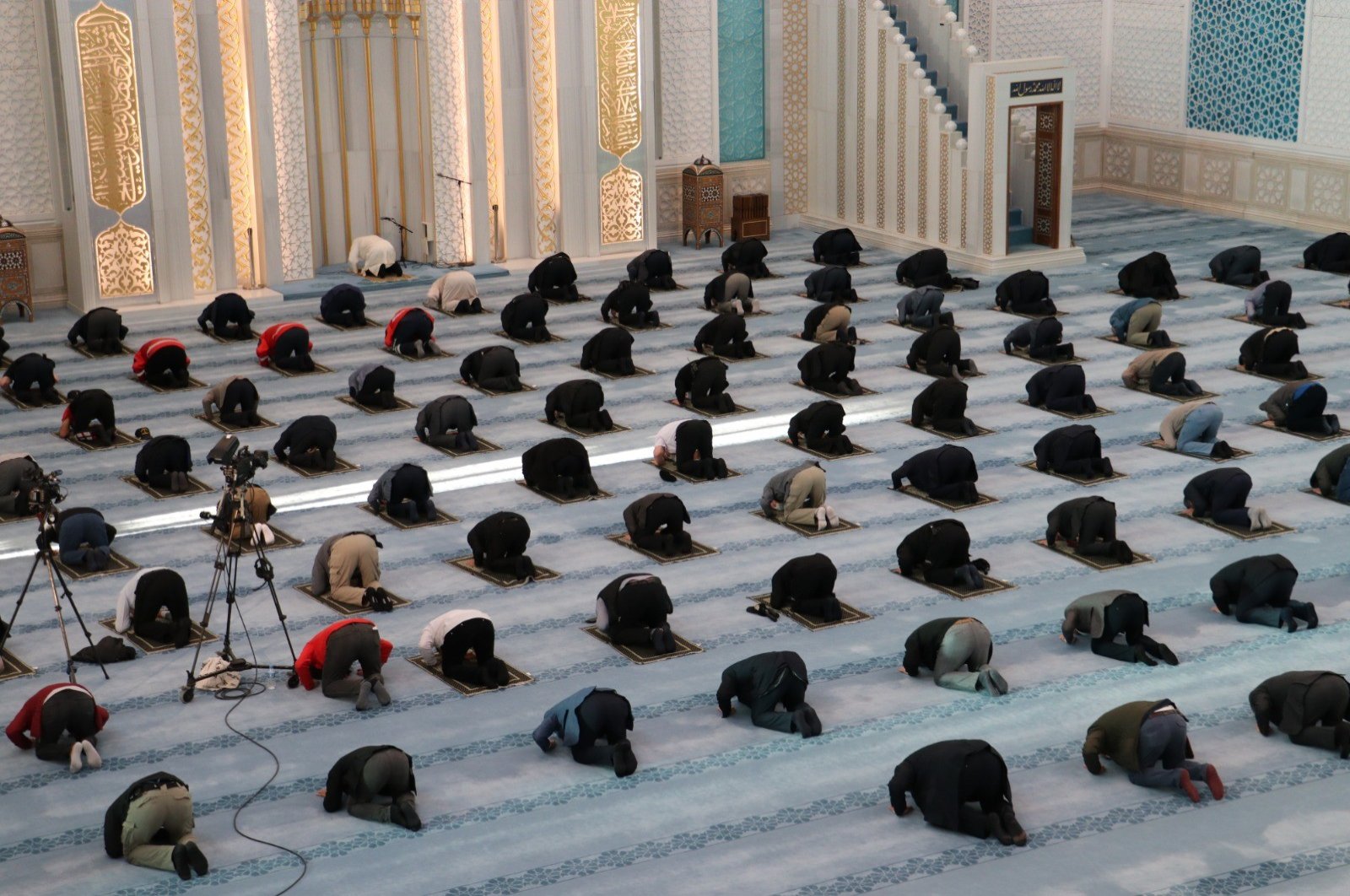 Though mosques were devoid of a congregation in the early hours of the first day of Ramadan Bayram, a mosque in Ankara held Turkey's first collective prayers in over two months. (IHA Photo)
by DAILY SABAH May 24, 2020 9:07 am
Edited By Yasemin Nicola Sakay
RECOMMENDED

A limited number of Muslims gathered Sunday at the Ahmet Hamdi Akseki Mosque in capital Ankara, led by the head of Turkey’s top religious body Diyanet, to hold Turkey’s first congregational prayers since March when the whole country started going under lockdown to stifle the spread of the coronavirus.

Usually accustomed to enthusiastic celebrations with big family gatherings and feasts, shopping for new clothes, gifts, sweet treats, as well as large communal prayers at mosques during Ramadan Bayram, also known as Eid al-Fıtr, this year's festivities have been significantly toned down due to COVID-19.

However, despite the strict countrywide shutdown over the three-day festival, the government recently announced that it would allow for Eid prayers, the special congregational prayer held on the morning of the Eid al-Fitr, though only in Ankara and at one selected mosque, all the while adhering to social distancing measures.

Diyanet Head Ali Erbaş also held a special Bayram sermon for the occasion at the mosque.

Reiterating that the usually joyous occasion has been rather gloomy for Muslims this year, Erbaş said: "This year, we could not rush to our mosques together with enthusiasm like we did in the past years, as a nation. We will not be able to make Bayram visits this year to preserve our social distancing measures and not to violate others' rightful due by spreading this virus. Our belief in the matter is exactly that, as long as our hearts beat with the same excitement, distances are not important. As long as we share the same feelings and emotions, being far away does not prevent us from being in each other's company – as long as we can host our loved ones in our hearts. "

As part of the relaxation of Turkey's virus shutdown, Erbaş said congregational prayers at mosques would only be held for the noon (duhr) and afternoon prayers.

"We will perform Friday prayers in courtyards and the open spaces of our mosques until the (coronavirus) risk is reduced," said Erbaş.

Last week Diyanet announced that plans were in place to reopen mosques for communal prayers on June 12 provided proper precautions are taken. The move is intended to give a needed respite to the faithful after a three-month hiatus.

Back on March 16, Diyanet announced a nationwide ban on prayer gatherings, including Friday prayers, due to the pandemic.

Though almost devoid of worshippers, mosques have remained open to people who want to perform daily prayers.