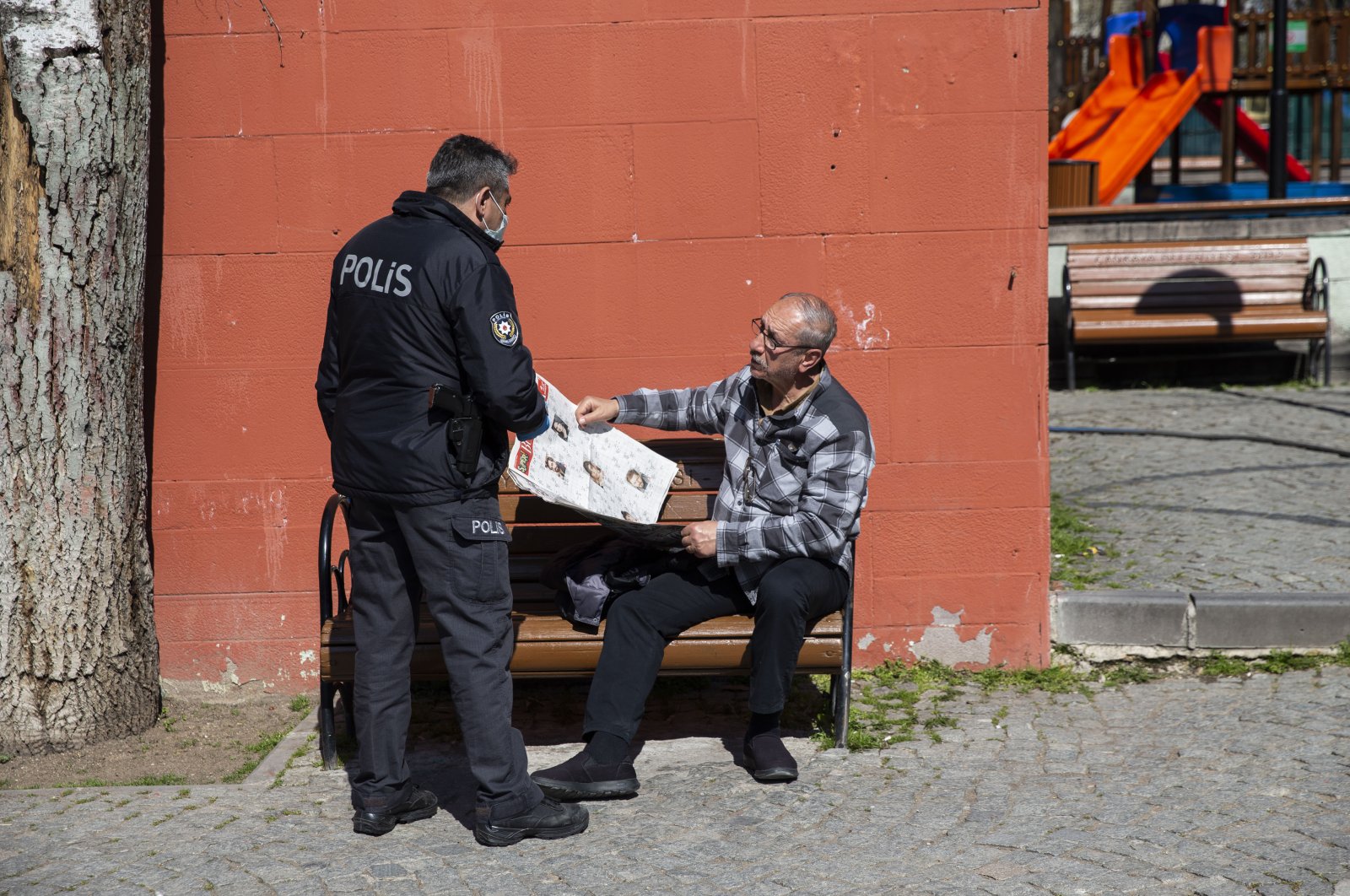 The government introduced additional measures, including a curfew for citizens age 65 and old, after the number of confirmed cases in the country jumped to 947. Authorities once again urged citizens to stay home after thousands were spotted in parks and along shores over the weekend

The Interior Ministry on Saturday announced the closure of all restaurants and ordered a curfew for all senior citizens age 65 and older in a drastic move to curb the country’s rising COVID-19 death toll. A total of 21 people have died from the disease caused by the coronavirus, while the number of confirmed cases jumped to 947.

Shortly after the ministry’s announcement, President Recep Tayyip Erdoğan urged all citizens to not leave their homes unless absolutely necessary.

The drastic measures came after several photos began circulating on social media that showed hundreds of people flocking to Istanbul’s shorelines for a walk on a sunny day. Meanwhile, others were photographed enjoying barbecues in the city’s wooded areas. It was not only Istanbul either, as similar scenes could be viewed across the country that showed thousands enjoying a day out, ignoring repeated warnings to stay at home.

On Saturday midnight, Health Minister Fahrettin Koca announced 277 additional cases had been confirmed as part of 2,943 tests carried out in the preceding 24 hours, bringing the total number of COVID-19 cases to 947.

The death toll also increased, as 12 more patients died from COVID-19 – all senior citizens, according to Koca.

While both the cases and death toll increased, there was, however, a noticeable slowdown in the rate of increase in case numbers. Since the announcement of the first positive case, Turkey had seen case numbers almost double every day. By Friday, the number of cases had increased by 86% from 359 to 670. A similar 87% increase had been recorded a day earlier on Thursday.

Saturday, however, saw the increase rate of case numbers fall to 41%, giving hope to citizens and authorities that the measures put in place were working to curb the spread of the virus.

While a decrease in rates offered some glimmer of hope, the fact that thousands ignoring calls to stay at home and flocking to parks and coastal areas across the country had the opposite effect.

With temperatures rising above the seasonal averages across much of the country, thousands rushed to the coastlines to take a stroll, taking their children to parks and even setting up barbecues with friends and family, all the while ignoring repeated calls from authorities to stay home and endangering not only themselves but those around them.

While Istanbul, the country’s most populous city, has been enjoying historic amounts of low traffic due to virus lockdown, it was as if life had returned to normal over the weekend. The city’s shores were flooded with a sudden influx of joggers who decided to take up a healthier lifestyle during the global health crisis. They were joined by whole families strolling among them, with seniors sitting on the many benches that dot the shore.

The parks were bustling too. On Saturday, many rushed to the city’s forested areas to light up barbecues with their families and friends. The scenes prompted the Interior Ministry to issue a ban on lighting barbecues in public parks until further notice.

And the country's most populous city, Istanbul, was no exception either. Similar scenes were reported on news sites and social media across the country, drawing the heavy ire of authorities and citizens who had heeded the call to stay at home.

Curfew for the elderly

However, above the barbecues and jogging activities, the most concerning sight for most of the country's citizens was that of senior citizens going outside despite being at highest at risk from the pandemic.

Media showed footage of thousands of elderly people getting dangerously close to others in public places, mass transit vehicles and parking areas. When reporters asked them why they were outside, none said they had any urgent business.

The weeklong stubbornness of some of the elderly community has already prompted many municipalities to remove benches from coastlines and parks. Most municipalities have also temporarily revoked the free mass transit passes of senior citizens to keep them from wandering the city.

Some senior citizens were caught indulging in backgammon and other games at tea houses, which should have been closed due to the ministry’s earlier orders.

Having given up attempting to plead with reasoning, the Interior Ministry on Saturday announced drastic measures to impose a curfew for citizens over 65 and people with chronic illnesses.

The ministry said that especially the elderly people living on their own would be taken care of by the governorate. If any kind of need should arise, they would be able to contact the police, gendarmerie and health services for assistance.

According to the ministry, people working in the public sector or those whose services were deemed necessary would be excluded from the curfew.

“It is of utmost importance for all our citizens to comply with the measures taken to halt the epidemic as soon as possible,” the ministry’s statement said.

Addressing the issue, the ministry said a failure to abide by warnings had prompted this latest step.

Calls for staying at home

Following the Interior Ministry’s announcement, authorities and organizations reiterated their calls for people to stay in their homes.

Speaking in a video released early on Sunday, Erdoğan urged citizens to stay home and practice social distancing if anyone had to go out, adding that all government offices were working at full capacity to overcome the crisis.

He urged people to follow instructions released by authorities and to stay at home. “Hopefully, we will get over this difficult process together.”

The president said the government had taken the necessary steps to ensure for the adequate supply of food and urged people not to panic over individuals “attempting to launch a negative campaign.”

“The state has taken all the necessary precautions. There is no shortage of any product. We have plenty of medical and other supplies. Do not be misled by (images of empty) shelves in some Western countries,” Erdoğan said.

“Don’t let reckless time spent at parks and shores turn into devastating news for your loved ones. Don’t leave your homes during this time when we need to consider ourselves, loved ones, neighbors and country before we act,” he said.

Police across the county also urged citizens to stay indoors through megaphones as they patrolled neighborhoods for senior citizens ignoring the curfew.

Expanding the measures to curb the spread of the coronavirus not only at home, Turkey imposed a flight ban to 46 additional countries on Saturday.

With the latest move, flights to 71 countries have stopped as a precaution to prevent imported COVID-19 cases.

The foreign ministry is expected to carry out evacuation for citizens in those countries.

While citizens were left with an endless stream of news from news outlets and social media, the Presidency Communications Office issued a statement urging all people to avoid spreading unverified information.

“Rumors, prophecies, conspiracy theories, unverified voice recordings. We see these unidentified but harmful posts about coronavirus on social media every day, and they are as dangerous as the virus itself. The solution is simple: Follow official statements,” Communications Director Fahrettin Altun said.

Altun urged all citizens to avoid sharing these types of posts and instead report them.