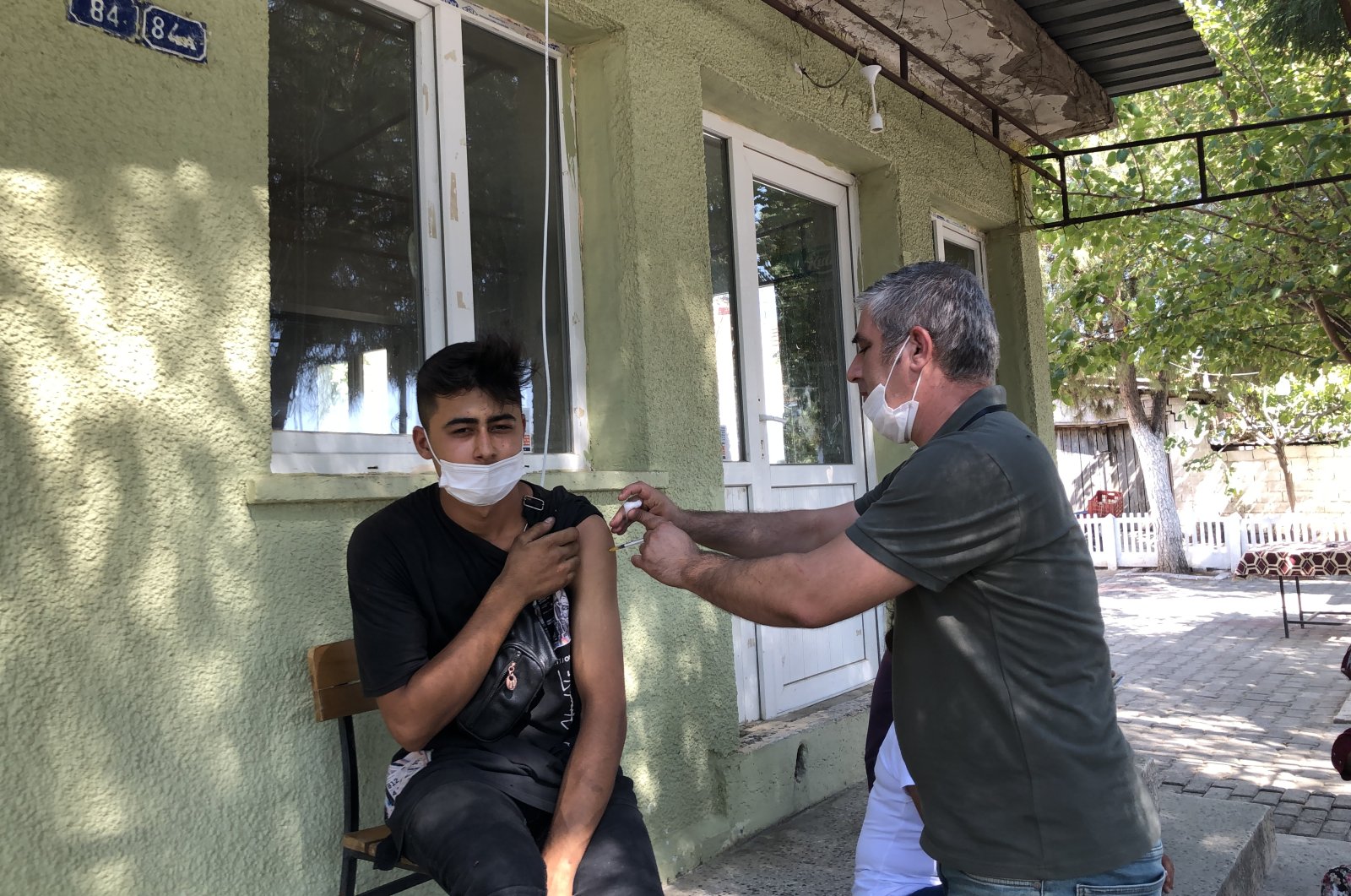 The Health Ministry on Monday rolled out a series of new rules to do with vaccinations, from lowering the eligibility age to 15, introducing fourth doses and speeding up the vaccination period for people who tested positive

Children aged 15 and above, and children aged 12 and older with chronic illnesses, are now eligible for COVID-19 vaccines in Turkey, authorities announced on Monday.

Turkey had last lowered the vaccine eligibility age to 18 in a bid to boost its vaccination program in which more than 83.6 million doses were administered.

The country also changed the period for the first dose of the vaccine for people who tested positive for the coronavirus. They will now be able to get their first dose a month after they test positive, instead of three months later.

Under new rules, a fourth dose will be available for people vaccinated with their third dose, 21 days after their last vaccination. Health Minister Fahrettin Koca later clarified that only those traveling abroad will be required to have received a fourth dose. As some countries require two doses of the Pfizer-BioNTech vaccine for entry, people who have received two doses of the Chinese Sinovac and one dose of the Pfizer-BioNTech jab, will be able to get a second dose of the latter vaccine as a fourth dose, according to the Health Ministry. “No additional doses are required for people who had their two doses of messenger RNA (mrNA) vaccine or three doses of inactive vaccine,” Koca tweeted, referring to the two vaccines available in the country.

Vaccination is vital for the country, especially amid concerns about the delta and delta plus variants. Though vaccination is not mandatory, the Health Ministry repeatedly appeals to the public to have their jabs.

The country lifted almost all restrictions, including curfews, on July 1, after a decline in cases thanks to the accelerated vaccination campaign with the arrival of more vaccines from China’s Sinovac and Germany’s Pfizer-BioNTech. Yet, vaccine hesitancy took hold in some provinces and certain age groups. Without vaccination, there are fears of a fourth wave of the pandemic occurring. Any slowdown in the vaccination drive also worries the public, who experts still urge to stay away from crowds.

The rise in daily COVID-19 cases, which fell below 19,000 on Sunday after fluctuating around and above 20,000 for a long time, is blamed on the unvaccinated. Professor Ata Nevzat Yalçın, an infectious diseases expert at Akdeniz University of Antalya, said that in their hospital 90% of COVID-19 patients in intensive care were people who did not receive their vaccines. The unvaccinated also make up 40% of patients hospitalized for COVID-19 at the university's hospital, he told Demirören News Agency (DHA) Monday.

Yalçın said that the unvaccinated were unable to gain sufficient immunity against the coronavirus and suffered from a severe bout of the illness. "The vaccines prevent people from ending up at intensive care and/or hospitalization," Yalçın said. "The rate of people with both doses of vaccine is still around 37%. This number should exceed 60%. We need a faster vaccination, especially before the autumn, when respiratory infection cases increases," Yalçın said. Yalçın also said that the three doses of vaccination were good for protecting people for nine months but more doses could be required after that period.

Increasing the number of vaccinations depends on "persuasion" as Turkey mobilized everything, from securing sufficient supplies of jabs for the population to lowering the vaccine eligibility age. The Health Ministry already runs awareness campaigns to convince more to get their jabs. Mobile health care crews go door-to-door in 81 provinces to talk the unvaccinated into getting their doses.

Associate professor Ersin Uygun, a psychiatry expert, said the persuasion efforts should focus on the "undecided" instead of "anti-vaxxers." Undecided or reluctant citizens are among the majority abstaining from vaccines according to authorities. Anti-vaxxers, on the other hand, thrive on social media where conspiracy theories flourish.

Uygun told Anadolu Agency (AA) that the people who are reluctant "are worried what the vaccines would do to them. It is wrong to approach these people as though they are 'threatening the life of others.' We have to understand their concerns and should not act in a forceful way," he said.

Uygun said the concerns of people who are reluctant to receive their jabs were triggered by the "swift process" in the pandemic. "There has been a race to find the first vaccine. Phase trials were accelerated and vaccines received emergency approval. This worried people and made them unsure whether the vaccines would be harmful to their health in the long run. In Turkey example, different data on the efficiency of the first available vaccine (China's CoronaVac) in different countries also fuelled concerns among people. For other vaccines (Pfizer-BioNTech jab), data on its likely cardiac side effect drove up concerns though it was an infrequent side effect. These may be nothing compared to the fatal impact of the coronavirus but for some people, it evolved into something of concern," he said.