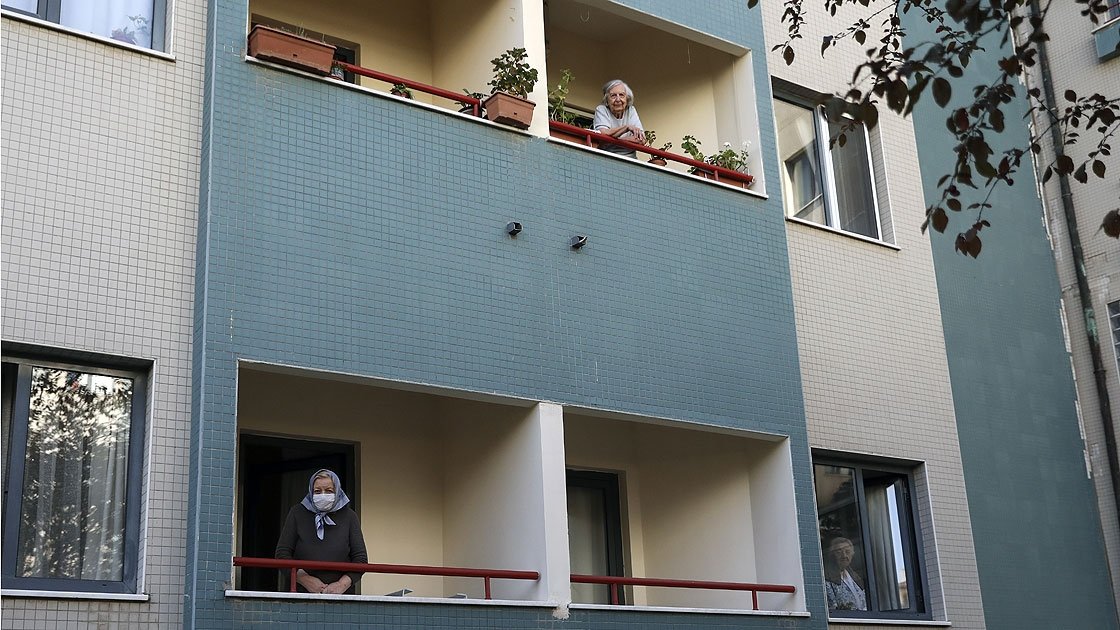 As the coronavirus pandemic continues in Turkey with increasing daily cases, care and nursing homes for the elderly, who are at the highest risk, remain a safe haven, thanks to strict measures adopted by authorities

For a while, Turkey fared well in containing the coronavirus outbreak but has found itself lapsing into a worsened situation recently. Daily cases are around 30,000 nowadays. Nevertheless, those at the highest risk from infections apparently remain safe. Turkey is among the most successful countries in saving the lives of the elderly in nursing and care homes.

Thanks to effective measures taken in nursing and care homes, Turkey has prevented outbreaks in those facilities. In the countries most affected by the pandemic, around 50% or more of all deaths from the virus are from the elderly living in nursing homes, according to the country's Directorate of Services for the Disabled and Elderly. According to the directorate, less than 10% of coronavirus-related deaths occurred in nursing and care homes in Turkey.

Turkey started to implement measures in care homes in February 2020, a month before the first COVID-19 cases were reported in the country, by restricting visits and monitoring temperatures of residents at least four times a day. In April 2020, all facilities serving the elderly were instructed to switch to a 14-day fixed shift system and COVID-19 tests were conducted on personnel entering and exiting facilities from the outside. If test results are positive for the virus, that individual is treated at a hospital. Those whose treatment process has been completed are monitored in isolation institutions for 14 days following hospital discharge.

According to the United States Centers for Disease Control and Prevention, older adults are at greater risk of requiring hospitalization or dying if diagnosed with COVID-19.

The measures taken at nursing and care homes in Turkey have been shown as a model several times by the World Health Organization (WHO).

As of March 18, the vaccinations of people older than 65 and health care workers have been completed, said Health Minister Fahrettin Koca. People aged 65 and over constitute 9.5% of the population and made up nearly 8 million people in 2020. The country is 66th among 167 countries in the ranking of its elderly population ratio, according to the Turkish Statistical Institute (TurkStat).

On Saturday, Health Minister Fahrettin Koca said Turkey will start vaccinating people aged above 60 years and some risk groups. "Citizens over the age of 60 will be able to get the vaccination by appointment with their spouses. In addition, some risk groups were included in the program," Koca said on Twitter. "Patients with morbid obesity, cancer with a malignant tumor, and those who receive dialysis, as well as people with Down's syndrome and those receiving immunosuppressive treatment were identified in the system to for priority vaccine jabs," Koca said. "We want to protect our most vulnerable citizens as soon as possible," he added.

For those in nursing and care homes around the world, on the other hand, the situation is quite grim. Around 66% of Canada's terminal COVID-19 victims lived in nursing homes, among the highest rates in the world. As the U.S. recorded the highest number of coronavirus-related deaths with nearly 550,000 fatalities, the figures show that eight in 10 COVID-19 deaths have been in adults 65 years old and above.

In Europe, 30% to 60% of COVID-19-related deaths in 2020 were residents of long-term care facilities, including older age groups, according to the WHO.

Between March 2 and June 12, 2020, 18,562 residents in care homes in the United Kingdom died from COVID-19, including 18,168 people aged 65 and older, representing almost 40% of all deaths involving COVID-19 in England during that period, according to data from the U.K. Office of National Statistics. As of Nov. 15, 2020, a total of 40,749 people died from COVID-19 in Spain, according to its Ministry of Health. Initially, several studies estimated that around 70% died in care homes. About half of all COVID-19 deaths in Germany are from care home residents according to data from online survey results in the country, which is similar to findings from other Western countries.

The pandemic has claimed more than 2.77 million lives in 192 countries and regions since December 2019. In Australia, 909 deaths have been reported, including 678 fatalities in care homes. According to figures compiled by the U.S.-based Johns Hopkins University, more than 126 million cases have been reported worldwide, with recoveries exceeding 71 million. The U.S., India and Brazil remain the worst-hit countries in terms of cases.