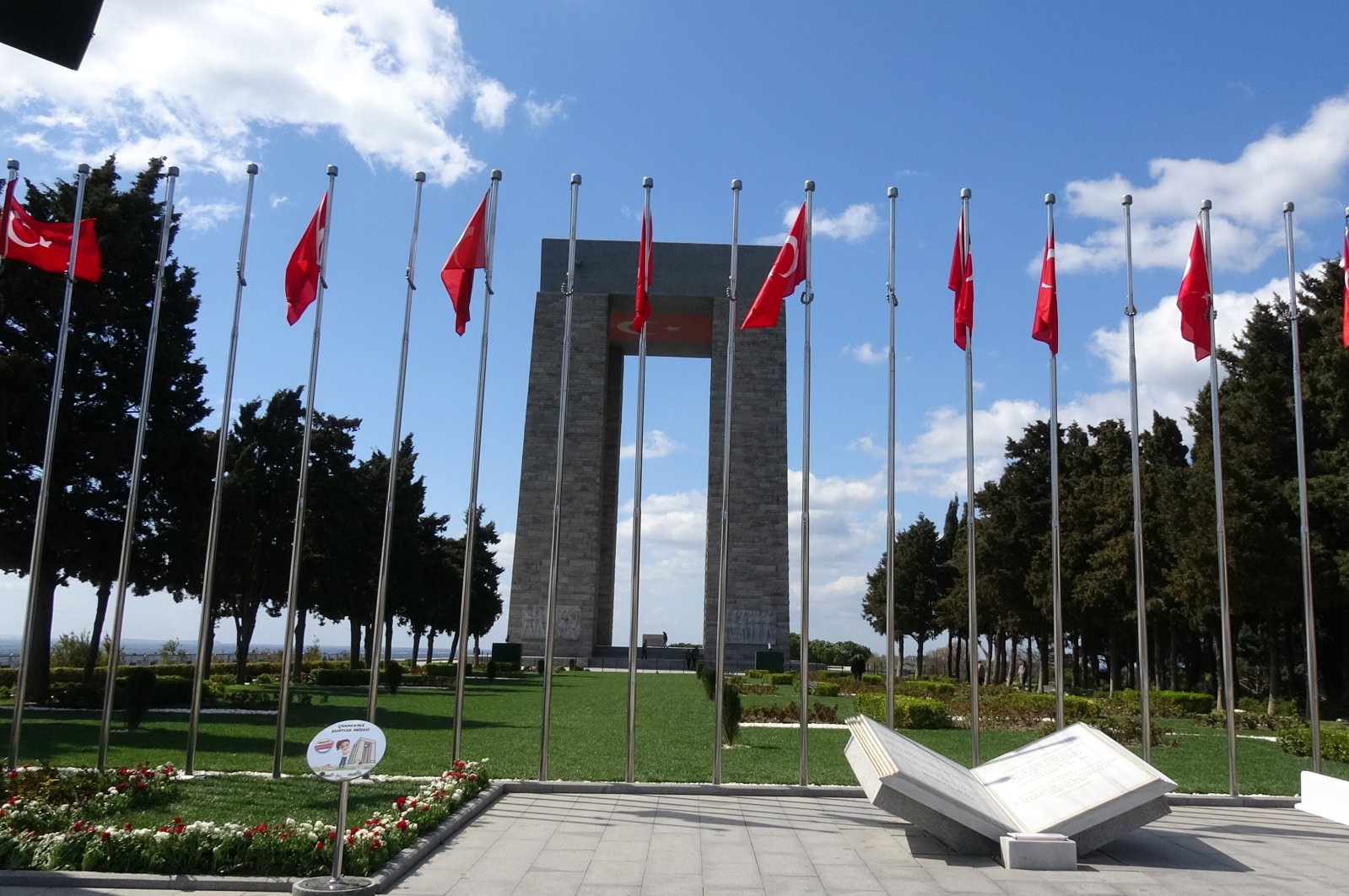 Martyrs’ Memorial is seen behind Turkish flags, Wednesday, March 18, 2020, in Çanakkale. The memorial on Hisarlık hill, one of the battlefields during the campaign, is situated next to a cemetery for fallen soldiers. (İHA Photo)
by Daily Sabah with AA Mar 18, 2020 10:22 am
RECOMMENDED

Turkey on Wednesday marked the 105th anniversary of March 18, 1915, a day celebrated as Çanakkale Victory and Martyrs’ Day.

The poignant day marks the cataclysmic, months-long violence of the Gallipoli Campaign when Ottoman forces suffered huge losses defending Turkish shores in northwestern Çanakkale province from the invading Allies in World War I.

The campaign, although catastrophic for the Turkish side, ultimately made history as the last great victory of the ailing empire and in a way, the first step into the birth of another country: the Republic of Turkey. It was this chapter of the war where the republic's founder Mustafa Kemal Atatürk proved his mettle as a leader to create a new Turkey from the ashes of the Ottoman Empire.

The anniversary is a patriotic event and for years, was marked with large-scale events in Çanakkale attended by the country's leaders. This year, however, the events were low-key due to coronavirus fears. Apart from a group of local officials, few people turned out for the event. A small crowd gathered at a square in Çanakkale for a wreath-laying ceremony, while events which usually conclude with visits to the graves of fallen soldiers were canceled.

President Recep Tayyip Erdoğan issued a statement on the occasion of the day. "Those who do not know what happened in Çanakkale a century ago, and those who do not understand the struggle, cannot understand the determination in our stance against threats to our country today," Erdoğan said in a written statement. "Çanakkale Victory, which is one of the milestones in our history, was also the harbinger of our War of Independence, and the unity, brotherhood and solidarity exhibited in Çanakkale revealed the spirit that is essential for our struggle for the independence," Erdoğan added.

Istanbul was the target

Britain’s HMS Irresistible and HMS Ocean and France’s Bouvet were sunk by mines laid by the Ottoman vessel Nusret before they passed the strait. Realizing that they could not pass, the allies started a military operation on April 25.

The 5th Army Commander Liman von Sanders left two forces in the narrowest part of the Gallipoli Peninsula, expecting that allied forces would land on the shores of the Saros Bay. Sanders was planning to attack during the military operations while keeping the troops behind.

As Britain and France failed March 18, they planned to take troops to the Arıburnu, Seddülbahir and Kumkale shores on April 25 to open the Gallipoli Strait with a military operation.

The Ottoman Empire went to war with its ally Germany, along with citizens and volunteers in the country with more than 30 nationals.

The allied army, on the other hand, consisted of British and French soldiers, as well as soldiers brought from colonies in Australia, New Zealand, India, Nepal and Senegal.

The second period started at the Gallipoli front with allied soldiers landing troops in Arıburnu, Seddülbahir and Kumkale.

British Gen. Sir Ian Hamilton faced unexpected resistance in Alçıtepe district on April 25, which he chose as the first target. Australians and New Zealanders, referred together as Anzac troops, significantly lost in Arıburnu, where they landed on the same day.

The Entente Navy landed at Chunuk Bair and in Hisarlık districts and were repelled shortly thereafter.

Under the command of Sgt. Yahya, the soldiers in Ertugrul Bay repelled outnumbered British forces.

The 19th Division Commander Lt. Col. Mustafa Kemal, who would later become the founder of the Turkish Republic, sent an additional regiment to Ariburnu.

The regiment resisted and repelled eight full battalions with the support of additional troops.

'I am ordering you to die'

On April 26, he dispatched the 72nd Regiment and the 8th Mountain Battery to the southern wing in the face of the enemy's intense attacks. The corps reported any additional troops could not be sent. Col. Kemal said that day was "the most critical day against the enemy."

The first Battle of Kirte took place from April 28-30. Allied forces of two British and one French brigade failed to occupy Alcitepe against the defense of the Ottoman soldiers.

The Entente States went to the Second Battle of Kirte from May 6-8 to take over Alçıtepe, asking for new reinforcements.

Despite the great losses, Britain’s First Lord of the Admiralty Winston Churchill was ordered to continue the operations.

Churchill resigned May 17 after he was not involved in the newly-formed British Cabinet. On the same day, the British government requested Russia to send troops to the Gallipoli Peninsula.

Esat Pasha, who was appointed as the Commander of the North Group, ordered an attack for Ariburnu on May 18, but four divisions of the Ottoman forces failed.

A cease-fire was reached between the Ottoman and the Entente states on May 23. The cease-fire was effective between 9.30 a.m. and 4.30 p.m. for the parties to collect martyrs and injured soldiers.

The warring sides would return to their trenches at 4 p.m. and the war would start again.

Lt. Col. Kemal had great successes in the Gallipoli Peninsula. He halted the advance of the Anzac troops landing in Ariburnu into the peninsula in Chunuk Bair. Thereupon, Kemal was promoted to colonel by Sanders on June 1.

Gen. Hamilton decided to attack the Yassıtepe-Alçıtepe on May 19, considering the great losses. Ottoman reserve troops suppressed the attack of enemy troops from June 4-6.

At the First Battle of Kerevizderesi, French Corps attacked to occupy the Kerevizderesi district but was suppressed by the Ottoman defense from June 21-22.

Entente States, who wanted to take over Zigindere district, also failed in the Battle of Zigindere, which lasted from June 28 to July 5.

As allied forces failed in the landing on April 25, they started a new attack at Suvla Bay on Aug. 6.

Under the command of Col. Kemal, Ottoman forces defeated the Anzacs and Indian troops with a bayonet thrust.

The British government decided to withdraw some of its soldiers from the Gallipoli Peninsula on Dec. 9. Suvla Bay and Ariburnu were evacuated immediately, but a small number of soldiers were kept in the Seddulbahir until Dec. 20.

The Entente forces evacuated Seddülbahir on Jan. 9, the last point they occupied. As they completely withdrew from the Gallipoli Peninsula, the Turkish nation won the victory.

March 18 is considered one of the most significant victory days in Turkish history and is commemorated with Turks cherishing their martyrs and war veterans.

The March 18, 1915 victory gave the country a massive morale boost that enabled it to wage a war of independence and eventually, in 1923, form a republic from the ashes of the Ottoman Empire.