Turkey mobilizes for solidarity in the face of outbreak 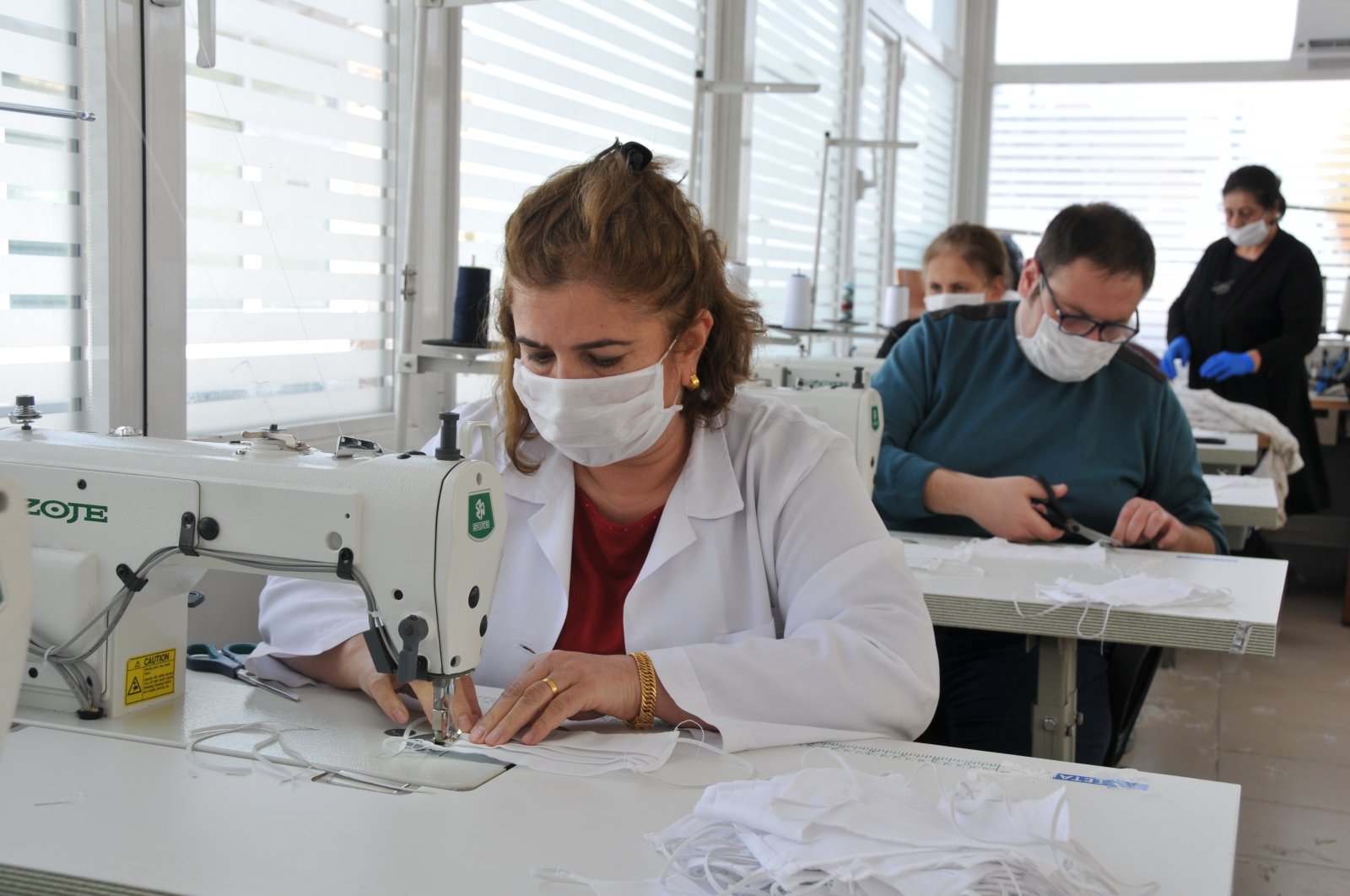 The COVID-19 outbreak keeps threatening Turkey, but signs of solidarity, from material support to personal sacrifices by health care staff, offer a glimmer of hope for the nation

First came nationwide applause from balconies, then came a barrage of messages of support for health care workers overwhelmed with coronavirus cases. The Turkish public has displayed its sense of solidarity in various forms with some companies, shops and municipalities offering free services for health care workers. Doctors and nursing staff at the hospitals are at the forefront of the outbreak, working long shifts with few breaks. Along with the elderly, they are the most vulnerable to possible infections. Nowadays, both groups of people are among the most respected and protected.

Since the outbreak made its way to Turkey earlier this month, the country ramped up measures and the government drummed up public support in the fight against the coronavirus. With few exceptions, a spirit of unity, last seen in resisting the 2016 coup attempt, prevails across the country. The country’s elderly and chronically ill may be legally forced to stay home with a curfew, but there is a lifeline, such as government employees and volunteers shopping for their groceries and other needs. Businesses also give a lifeline to the state by volunteering to give resources, especially medical equipment.

One of the most visible signs of solidarity, normally reserved for wartime, is people all across the country volunteering to sew masks. From western cities to small towns in the east, everyone with skills is stepping forward to offer their sewing services to help the country cope with the possible shortage of masks crucial in the fight against the virus.

Vocational learning centers, a staple of every town, are at the forefront of mask-sewing efforts. Hunching over their sewing machines, students and teachers of those centers, mostly women, work tirelessly to sew thousands of masks for health care workers.

In Mersin, for instance, the staff at two vocational learning centers devote their time to producing thousands of masks for the local hospital which suffered from a shortage. Two workshops staffed by 15 sewing teachers are operational to address the needs of the hospital. In the western town of Kula in Manisa province, teachers and students at a vocational high school turned their sewing workshop into a small factory for mask production for local hospitals. Students attending fashion design classes managed to sew 300 masks in one day for the hospitals.

In the northern Turkish province of Tokat, three Afghan siblings who migrated to Turkey nine years ago and work as tailors, donate masks they make to the public. Hadiya, Darya and Muhammad Ahmadi manufacture around 1,000 masks per day. "We wanted to contribute to fight against the virus," Darya Ahmadi told Anadolu Agency (AA) on Tuesday.

Turkish businesses are also stepping up to produce masks and disinfectants.

A total of 1 million masks will be produced per day for healthcare workers and 100,000 tons of disinfectant will be donated to efforts to fight the virus' spread, in particular to health care workers, said Turkish Exporters' Assembly head İsmail Gülle on Tuesday.

He added that Turkish exporters are aware of the seriousness of the pandemic, promising to stand in solidarity with Turkey's heroes, its health care workers. A medical equipment producer in the capital Ankara also donated 600,000 medical gloves to local health authorities Tuesday.

Every business is stepping up to the plate in the fight against the virus. Defense contractors offer assistance to the government as well. Mithat Ertuğ, head of an association of 255 companies in Ankara active in the defense and aviation sector, told AA Tuesday that they were ready to supply the needs of the health care sector. “We hear about some emergency needs, especially for test kits and safety equipment, etc. We can produce them if needs arise,” he says.

A DUTY TO THE ELDERLY

Turkey’s senior citizens are among the most vulnerable to the coronavirus and are now most affected by the measures against the outbreak. A curfew declared last weekend for citizens 65 and above disrupted their daily lives, but the government and volunteers are doing what they can to help them meet their needs.

With a phone call, they can ask local law enforcement to shop for them or help with any other needs. Municipalities also regularly check on elderly citizens living alone. Local administrations formed “vefa (duty) groups,” consisting of administration officials and workers paying visits to the elderly to check their health and needs.

Impoverished families and disadvantaged communities are also at risk. The Turkish Red Crescent, the country’s leading charity, announced that it will deliver food aid to 150,000 families and give TL 400 cash ($60) aid to some 75,000 households. The Red Crescent already supplies meals for people who arrived from abroad and were placed under quarantine in student dormitories. The charity dispatches volunteers to residences of senior citizens and citizens with chronic illnesses forced to stay home. It also provided 150 field hospitals to the Health Ministry for likely needs.

The charity announced it will send 100,000 hygiene kits to families in need. The kits include shampoo, soap, cologne, detergents, toilet paper, toothbrushes and toothpaste.

Turkish people's sense of charity is not limited to Turkey. The Turkish community in Austria brings the spirit of unity to citizens embattled with more than 4,000 coronavirus cases. Turkish associations in the country both deliver aid to the elderly and the sick and raise awareness of the outbreak.

The Austria Linz Islamic Federation is among the associations working to help Austrian citizens. Its general coordinator, Ercan Sarıkaya told Anadolu Agency (AA) that they have launched a program called “Neighborhood Assistance.” The program in the upper Austrian state, which has a population of 1.5 million people, provides food and medicine particularly to the elderly. “We help everyone regardless of their ethnicity or religion. We received some very positive feedback. They appreciate this expression of solidarity,” he said.

Zöhre Doğan, head of a charity linked to Austria's Alevi community, says they launched a volunteer group and focused their aid to the Tyrol region bordering Italy. So far, they have provided aid to about 50 families. “You can see the dread of the virus in people’s eyes, but our help made them smile again,” she says. “Turks have always overcome challenges, like disasters, by helping each other. We brought this kind of solidarity to Austria,” she said.

Meanwhile, Turkey announced nationwide restrictions on supermarkets and public transport to contain the spread of the virus. As of Tuesday, supermarkets and grocery stores will be open between 9 a.m. and 9 p.m. only, closing an hour earlier than usual. There will be limits on the number of customers at any given time as well, depending on the size of the store. Supermarkets will not allow new customers if the customer limit is full. Buses carrying passengers between cities and within cities will also operate at 50% capacity under the new regulations.

Meanwhile, the death toll from the virus rose to 37 Monday, while the total number of infections reached 1,529, according to the Health Ministry.

Hundreds of people were placed under quarantine after arriving in Turkey from Europe and other countries late Monday.

The Foreign Ministry announced on Twitter that Turkish students from the U.K., Ireland, Switzerland and Poland —countries which had earlier been placed under a flight ban— returned to Turkey and were immediately placed under quarantine.

Foreign Minister Mevlüt Çavuşoğlu earlier confirmed that some 3,358 students from seven countries under the flight bans had applied to return and that each would be placed under a 14-day mandatory quarantine.

A group of students, who were in Europe as part of the Erasmus exchange program, was boarded at a student dormitory in the central city of Sivas. Another additional 346 people, returning from various countries, were placed in a dormitory in the northwestern city of Sakarya. The city already hosts 88 truck drivers, who arrived from Ukraine via a cargo vessel as part of Turkey's evacuation efforts and all were placed under quarantine in the dormitories. Student dorms in most cities were evacuated earlier during a break for universities amid escalating measures against the virus.

More than 11,000 people who have arrived in Turkey from abroad have been quarantined in 36 dormitories across 23 provinces, Youth and Sports Minister Mehmet Muharrem Kasapoğlu said Monday.

Health Minister Fahrettin Koca announced on Tuesday that COVID-19 drugs brought from China were distributed in 40 cities in Turkey via air ambulances, and they would be used for patients being treated in intensive care units.

Turkey has dispatched 26,000 test kits for the novel coronavirus to Colombia, the latter's National Institute of Food and Drug Monitoring (INVIMA) said Tuesday. INVIMA said in a statement that the kits arrived on Sunday, enabling the country to run tests quicker and more efficiently. INVIMA Director Julio Cesar Aldana Bula thanked the Turkish government for its support. Colombia has 277 confirmed COVID-19 cases and three deaths.