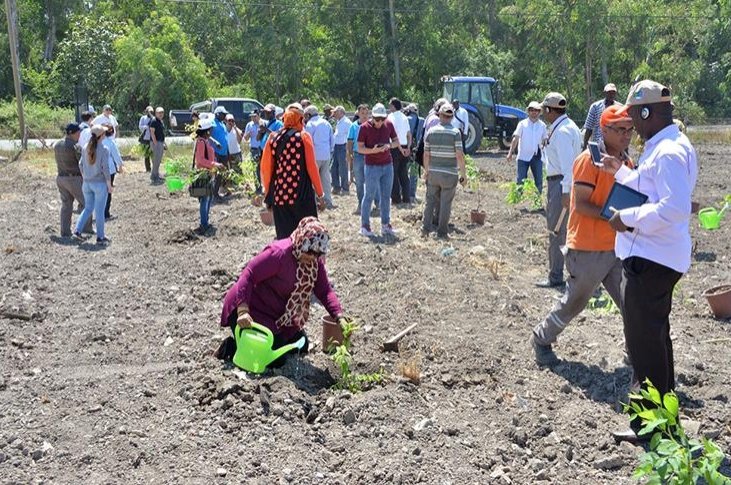 Drawing from its experience combatting desertification and erosion, Turkey is helping other countries fight against land degradation.

Minister of Agriculture and Forestry Bekir Pakdemirli said Friday that 953 experts from 108 countries have been trained by Turkey for the prevention of desertification and erosion. Pakdemirli said in a written statement that more will be trained soon.

After the start of the coronavirus pandemic, these educational offerings shifted from field training to an online platform.

Home to various climates across its diverse terrain, Turkey is at high risk for desertification stemming from the onset of climate change and other factors such as misuse of agricultural land and harmful irrigation methods.

More than half of Turkey’s soil has the characteristics of arid, semiarid and semihumid climates. Turkey's central and southeastern regions, known for their vast flatlands and steep mountains, are particularly vulnerable to the risk of desertification. Erosion is another threat to Turkey, where the elevation of most land is far higher than countries in its immediate region or in European countries.

Turkey stepped up efforts to fight the desertification and a nationwide tree-planting campaign was launched last year. The “Breath for the Future” campaign inaugurated by President Recep Tayyip Erdoğan saw the planting of more than 11 million saplings in one day. Pakdemirli said more than 4.6 billion saplings were planted in an area of 5.4 million hectares in the past 18 years since the incumbent Justice and Development Party (AK Party) came to power.

Desertification threatens the planet, with implications for biodiversity, poverty levels, socioeconomic stability and sustainable development, according to the United Nations. The international body warns that some 50 million people may be displaced within the next decade as a result of desertification. Arable land degradation is estimated at 30-35 times the historical rate, according to the U.N. The world loses 24 billion tons of fertile soil yearly and the dry-land degradation reduces domestic national product in developing countries by up to 8% every year.