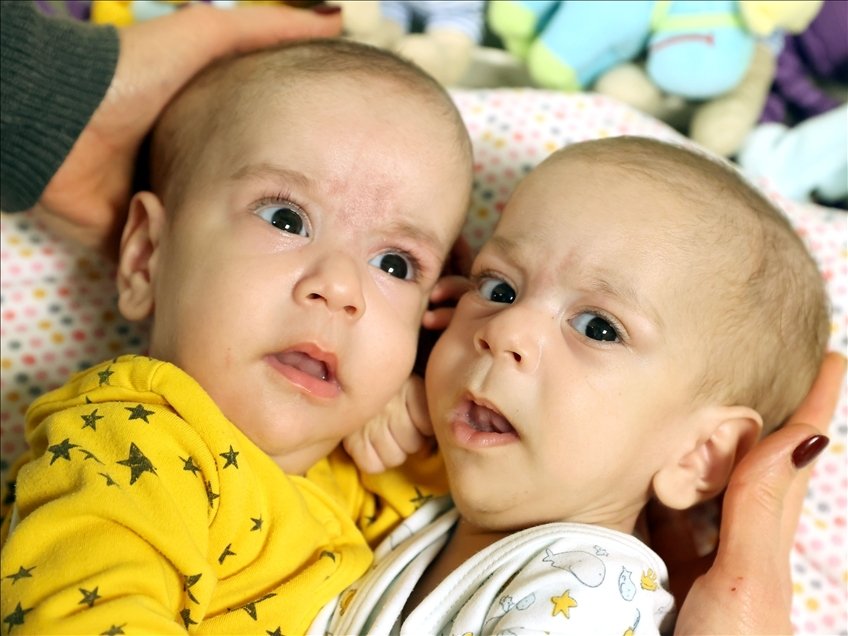 A mother of conjoined twins was reunited with her babies after 101 days, thanks to efforts by the Turkish government that brought her to the capital Ankara from northern Syria.

The twins – Bessam and Ihsan – were born on Oct. 25 last year in war-torn Idlib. Despite the low mortality rates of the conjoined twins, the two survived.

Their father, Mahmoud Salih, requested help from Turkey soon after finding out about the condition of the children at birth.

After a positive response to Mahmoud, the conjoined twins were first brought to Turkey's southernmost province of Hatay and later transferred to Ankara Medical Faculty Hospital for treatment in the capital.

With the efforts of Turkish authorities, the twins' father arrived in Ankara, leaving behind his three other children with their mother in Syria.

Speaking to Anadolu Agency (AA), Mahmoud, 40, explained their journey from Idlib to Ankara, holding back his emotions.

Mahmoud said on seeing the condition of the children, he had requested Turkey's help to get his children treated.

"Thanks to Allah, our request was approved, and I was able to take my children to a hospital in (Hatay's) Antakya (district)," he said.

After the necessary procedures, Bessam and Ihsan were transferred to Ankara Medical Faculty Hospital.

Though the children were without their parents, the health care workers, from nurses to doctors, from surgeons and chief physicians, all provided the love and care a baby needs. But even then, the conjoined twins needed their mother to help them grow and nourish until the day of separation surgery.

The Turkish government expedited efforts to bring the mother and her three other children to Turkey and reunite the family at once.

"It was challenging times for me. I had to leave my wife and my children behind. It was very hard. Gratefully, they are here now, and we are reunited," Mahmoud said.

Mahmoud expressed his gratitude to the Turkish government, officials and health care workers for their efforts and works.

"When I had no idea what to do (after finding out about the twins' situation), Turkey extended its helping hand," he added.

Meanwhile, Bessam and Ihsan's mother Lubaba was anxiously waiting in front of the newborn intensive care unit to finally reunite with her babies.

Noting that she had experienced "challenging times" when her babies were away from her, Lubaba, a mother of five, said she came down with an illness.

"With my children away from me for three months, I became ill. Their father (who came to Turkey earlier) was not with us (in Syria) either," she said.

Lubaba also thanked the government of Turkey and its officials, as well as the health care workers.

"Thanks to Allah, I am thrilled and joyous to see my children finally," she added.

Known to be one of Turkey's most rooted faculty hospitals, the Ankara Medical Faculty Hospital provides treatment to approximately 650,000 outpatients and 33,500 inpatients annually with the latest technology imaging and medical devices.

Providing information about the twins and their condition, Dr. Saadet Arsan, the head of the Department of Pediatrics at Ankara Medical Faculty Hospital, told Anadolu Agency (AA): "The babies are Siamese twins, also known as conjoined twins."

"It is actually a rare condition in medicine, and these babies are conjoined at their torso region," Arsan said.

Preparations for separation of twins

She said the twins share some organs and the abdominal cavity as one of them does not have kidneys, a collecting duct system, bladder and pancreas.

"Of course, there is not a single right way when separating these twins as it is a more complex surgical process," the leading doctor said.

While the babies received uninterrupted treatment at the hospital during the three months, Arsan said councils comprising experts from all medical disciplines were formed to discuss the process.

"As a result, from these councils, we have concluded that the separation process of these twins will have to be gradual and will include a series of operations that would take time. During our latest council meeting, we have agreed that we must not hurry the procedures," she added.

Besides providing medical care to the twins, Arsan said as Ankara Medical Faculty Hospital, they took the initiative to reunite the babies with their family.

"A baby, regardless of whether it is conjoined at its abdomen or not, should grow and develop in a family environment," she said.

Fighting to hold back her tears of joy after seeing the entire family together, Arsan said, "when babies are not cared for by their families, they do not develop properly. Thus, as the medical team (of the twins), we are overly excited and joyous to see the family here, reunited at once."

Providing further details about the condition of the twins and their separation process, a pediatric surgeon from Ankara Medical Faculty Hospital, Dr. Gulnur Gollu Bahadir, said: "I received a phone call from Hatay hospital at the 10th hour after the babies were born and immediately spoke with our newborn unit and chief physician. The babies arrived at our hospital at their 24th hour (of birth)."

Reminding the rarity of the condition globally, Bahadir said the surgery for the separation requires a large team. They have initiated all necessary preparations for the surgery.

"As Ankara University Pediatric Surgery, we initiated the necessary attempts to separate these babies, but one of the babies' condition is more complex than the other. He has serious problems with the urinary tract while also sharing the membrane of their heart, liver and pancreas. One of the babies, when he arrived, did not have an anus as well. We had to operate immediately for that issue (...) we surgically created an anus," she said.

Noting that the babies' immediate care is done, Bahadir said the separation process is much more lengthy and said the entire pediatric department is closely monitoring the process.

"We started preparations for their separation, but it will take some time, perhaps a year or two," she added.

The conjoined twins would now have to patiently wait for their separation surgery but at home in the love and care of their family.