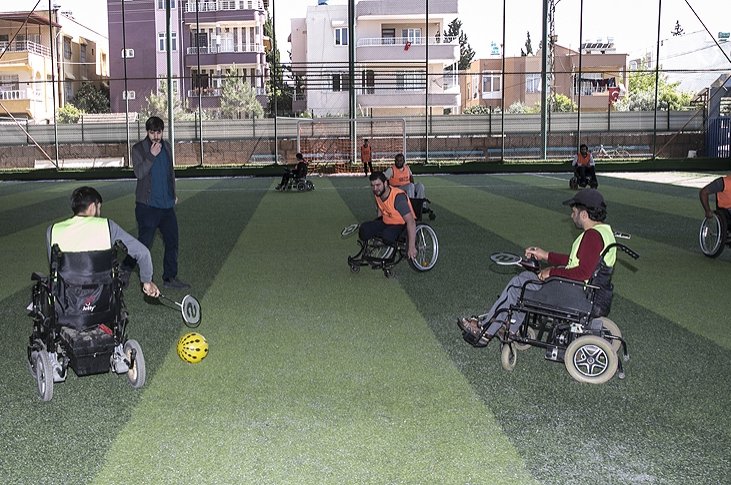 The Youth and Sports Ministry of Turkey is developing a project to build social and sports facilities for refugees in the country with the support of the European Union. The ministry announced Wednesday that 28 sports facilities would be constructed in places where young refugee populations were concentrated.

The move is part of the country’s efforts to offer a better life for the refugees it has been sheltering since the conflict in its southern neighbor Syria began in 2011. The ministry said that the joint project with the EU will see the construction of facilities for refugees between the ages of 6 and 30. The facilities will also be open to Turkish youth. The ministry picked the provinces of Adana, Adıyaman, Batman, Diyarbakır, Gaziantep, Hatay, Kahramanmaraş, Kilis, Malatya, Mardin, Mersin, Osmaniye and Şanlıurfa for the construction of these facilities. Most of these cities are located near the Syrian border and have long hosted large refugee camps for thousands of people.

The government aims to improve interactions between Syrian and Turkish youth with sports activities. Facilities will include training halls for various branches of sports such as football fields, camps and multi-purpose sports halls.

The Youth and Sports Ministry already carried out several projects for bringing sports to the young refugees and supports the projects of nongovernmental organizations (NGOs) with that aim. Sports training is offered for free in cities with large refugee populations, while young Syrians have free access to sports facilities. Minister Mehmet Muharrem Kasapoğlu said they would continue building “platforms” to develop the social harmony of refugee youth. “Turkey hosts the largest refugee population. We will do our best to help and serve our Syrian brothers and sisters under temporary protection, to heal their wounds. Turkey is one of the largest donors of humanitarian aid in the world and one of the most generous countries,” he said in a statement Wednesday.

After the Syrian civil war broke out, Turkey adopted an “open-door policy” toward Syrians fleeing the conflict, granting them “temporary protection” status. Since then, Turkey has received a constant flow of displaced Syrians fleeing the conflict and their numbers have expanded from mere thousands to millions. In this process, Turkish officials have undertaken humanitarian efforts to meet the basic needs of refugees by offering them various forms of assistance and helping coordinate international aid.

Youth and children make up the majority of Syrians who took shelter in Turkey. The country has reached out to at least 1 million Syrian children in an education drive.

Football is a popular sport among young refugees and some have even formed unofficial football teams, though they face obstacles in playing for professional clubs as the temporary protection status they are under in Turkey limits them from acquiring playing licenses.